Paul is Razorbacks' next up at linebacker 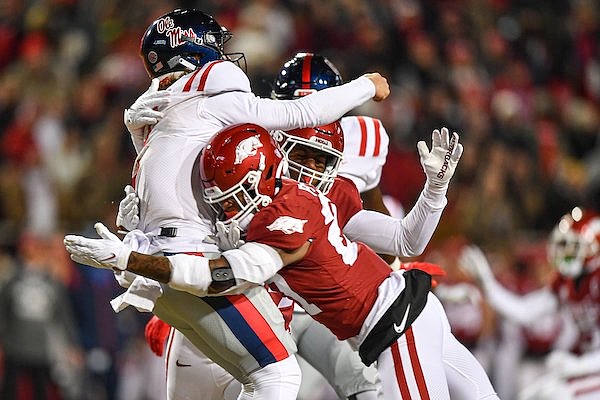 COLUMBIA, Mo. — Linebacker Chris “Pooh” Paul figured to take over as a starter next season for the University of Arkansas football team with Bumper Pool having exhausted his eligibility.

But that timetable has been moved up.

Paul, a redshirt freshman from Cordele, Ga., is expected to make his first start today when the Razorbacks play Missouri at Faurot Field in the regular-season finale.

Arkansas Coach Sam Pittman said Monday that Pool likely will sit out today because of an assortment of injuries — including his hips and back — that he’s been playing through and with the Razorbacks having secured bowl eligibility with their 42-27 victory over Ole Miss last week.

“I feel very confident going into this game,” Paul said. “Bump did a great job with mentoring me and teaching me the schemes, so I feel very comfortable with everything.”

Pool, a team captain, has played in 55 games the past five seasons after returning to use his extra year of eligibility granted by the NCAA because of the coronavirus pandemic. He’s Arkansas’ career tackles leader with 441.

“With me stepping in, I know it’s a huge role that needs to be filled,” Paul said. “But I’m ready for it.”

Paul has gotten increased playing time in recent games because of Pool’s injuries.

Against Ole Miss, Paul played a season-high 59 snaps on defense compared to 42 for Pool. Paul has played more than 30 snaps in three games.

“Every game [Paul] seems to get a little more confidence,” Pittman said. “He played well against Ole Miss, ran around, did some nice things. So we have confidence in him.”

Paul has 41 tackles, including 7 for losses totaling 37 yards. He has 4 sacks, 2 quarterback hurries, 1 forced fumble and 1 fumble recovery.

“Just getting to see his development from when he first got here to this season and the things that he’s done — coming in, meeting with us before meetings. He’s just growing up a lot as a person.

“I think that his success here is all up to how much he wants it, and he’s an extremely hard-working person. He’s done a great job when he’s had his opportunities, and he’s just going to continue to build on his game.”

“He flies to the ball, man,” Knox said. “He has a nose for the football. He always wants to be around the ball, and he’s physical.

“He will hit you. You go nose-to-nose with him, he’ll light you up. He’ll shed the block and make the play. He’s very physical, very fast and very smart.”

Paul will be playing alongside junior linebacker Drew Sanders, a transfer from Alabama who has 96 tackles, including 12.5 for 45 yards in losses, and is a finalist for the Butkus Award.

“I feel very confident in my teammates,” Paul said. “I know they’re going to know what to do with the schemes and the play-calling.

“Playing beside a great linebacker like Drew makes me even more comfortable.”

According to Pro Football Focus, Paul has a pass-rush grade of 85.3 on 43 pass-rush snaps.

Paul credited his lost yardage plays to watching extra film with linebackers coach Michael Scherer, Pool and Sanders as well as his confidence in the defensive line.

“Those plays for losses, I wouldn’t be able to do those without my D-line creating separation and creating those open gaps,” Paul said.

While redshirting last season, Paul played in four games, including the Razorbacks’ 34-17 victory over Missouri.

“Last year helped me out a lot,” Paul said. “The reason that I say that is because I was sitting behind three veteran guys [Pool, Grant Morgan and Hayden Henry] who were great at the game.

“Watching them really helped me out this year to become the best player I can be.”

On the season Paul has an overall defensive grade of 67.8 according to Pro Football Focus and he has just four missed tackles.

“When we recruited Pooh we thought he was going to be a real good linebacker, and he’s turned out to be that,” Pittman said. “I think he’s going to be an exceptional linebacker over the years for us.

“He’s got everything. He’s fast, physical, smart. And he’s playing that way now.”