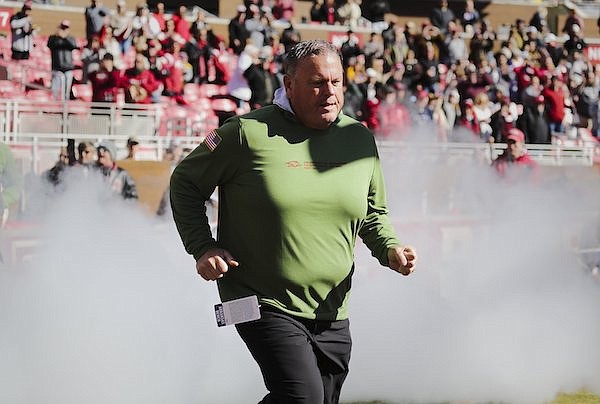 Arkansas coach Sam Pittman runs onto the field prior to a game against LSU on Saturday, Nov. 12, 2022, in Fayetteville.

“I was planning to get to some [games] earlier in the year but I had a lot of football stuff going on and we couldn’t make it,” Hawkins said. “I really wanted to get back again to see how they would play against Ole Miss and hang out with the coaching staff and the players and build that relationship.”

Hawkins, 6-2, 185 pounds, of Allen, Texas, is no stranger to Fayetteville because he visited the Hogs in June and again on July 30 for the Tailgate on the Hill gathering that featured committed prospects along with top 2024 and 2025 recruits.

He’s been joined on the trips by his teammate and sophomore tight end Davon Mitchell, also a major target of the Hogs.

ESPN also rates Hawkins the No. 8 dual-threat quarterback and the No. 238 overall prospect in the nation for the 2024 class. The versatile pass-run Arkansas offense is very attractive.

“Fits me really well and I feel like I can help the team in those type of ways, throwing the ball and running the ball,” Hawkins said.

He received his offer from Arkansas on June 18 and has been in contact with Pittman, offensive coordinator Kendal Briles and assistant quarterbacks coach Mark Cala since.

“Ever since the summer when I got my offer they’re just going up relationship wise,” Hawkins said. “Just us being able to talk not about football but about life. That’s a big thing with me. We shouldn’t have to talk about football all the time to build a relationship. I think they’re doing a great job of that.”

Hawkins was named the District 5-6A Offensive Newcomer of the Year as a sophomore after completing 161 of 249 passes for 2,807 yards, 21 touchdowns and 5 interceptions, while also rushing for 730 yards and 8 touchdowns on 104 carries.

While the Razorback coaches have been recruiting him hard, the fans have been doing their part on social media in letting him know he’s wanted.

“Just how they react to a lot of the stuff I post,” Hawkins said. “How they keep track of what I’m doing and when I come down to Arkansas.”

Hog fans being so active on social media is appreciated.

“It makes me feel good just knowing that I have people that want me to come to a school and feel like I can help the team win in the future,” Hawkins said.

His father Mike played cornerback at Oklahoma before being drafted in the fifth round by the Green Bay Packers in the 2005 NFL Draft.

In addition to Arkansas, Hawkins has visited Oklahoma twice this season while also making trips to TCU and Texas Tech.

His father has been impressed with Arkansas, too.

“How they operate, the city,” Hawkins said. “All the people around us. Every time we’ve come down, it’s been a good time.”

Hawkins talked about where Arkansas stood with him.

“Arkansas is one of my top schools,” he said. “They’ve been up there for awhile.”

He’s hoping to attend an Arkansas junior day in January.

“I’m still planning all that out right now,” Hawkins said. “That would be great if I got back up to Fayetteville for their junior day.”

It appears Hawkins could announce his college decision in the near future.

“I want to commit pretty soon, I just don’t have an exact date,” Hawkins said.

His brother Maliek Hawkins, a sophomore cornerback, also has an offer from the Hogs.