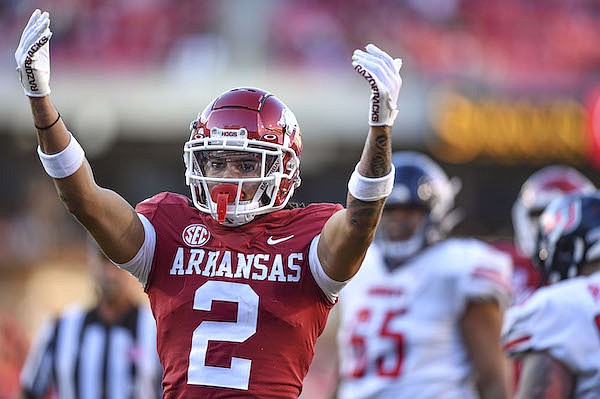 Arkansas defensive back Myles Slusher reacts after making a play during the Razorbacks' game against Liberty on Nov. 5, 2022, in Fayetteville.

“He came in and we visited on Sunday,” Pittman said following a 29-27 loss at Missouri, "and then Sunday evening he quit the team.”

A reporter followed up and asked Pittman how disappointed it was that Slusher left the team.

“That’s it,” Pittman said. “I don’t want to talk about that anymore.”

Slusher’s decision to leave the team came two weeks after he and teammates Anthony Brown were arrested Nov. 6 in connection with disorderly conduct. Slusher was suspended for the following game against LSU but returned to play in the game against Ole Miss.

According to the Northwest Arkansas Democrat-Gazette, Slusher has an arraignment scheduled for Dec. 1. Adam Rose, an attorney for Slusher, told the Democrat-Gazette that Slusher touched an officer’s shoulder after an altercation with Brown and started to ask what was happening, according to a Nov. 20 report. Another officer pulled Slusher away and told him he was under arrest, Rose said.

The Missouri game was the sixth game missed this season by Slusher, a first-team nickel back to begin the season. He missed four games for different injuries suffered in games against Cincinnati and Alabama.

Slusher was a 4-star recruit out of Broken Arrow (Okla.) High School and committed to the Razorbacks over offers from Alabama, LSU, Ole Miss, Missouri, Texas A&M, Nebraska, Notre Dame, Oregon and others, according to his bio on the Razorbacks’ website.

He played in 17 games and started eight in his first two seasons.