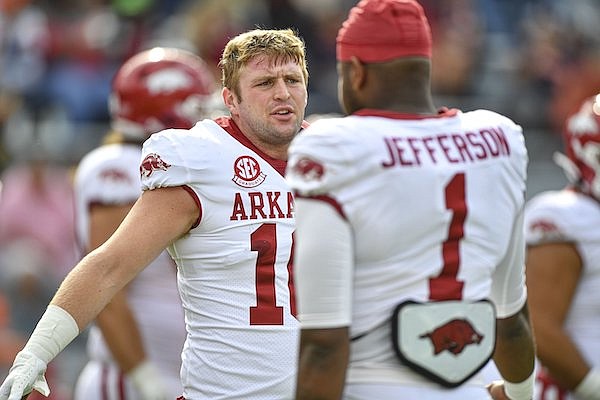 Arkansas linebacker Bumper Pool (10) speaks with quarterback KJ Jefferson during a game against Auburn on Saturday, Oct. 29, 2022, in Auburn, Ala.

Arkansas linebacker Bumper Pool underwent surgery Wednesday on an injured hip, according to the CBS broadcast of the Razorbacks’ game against Missouri on Friday.

The broadcast stated Pool has a procedure scheduled for his other hip at some point in the future.

Following the 29-27 loss to Missouri, Arkansas coach Sam Pittman said Pool’s surgery “went well,” citing a conversation he had with Pool earlier in the week.

On Monday, Pittman spoke as if Pool was doubtful for the Missouri game and the Razorbacks’ bowl game, but did not mention surgery. Pittman said Pool had battled injuries to both hips and his back for most of the season.

“Bless his heart,” Pittman said Friday. “He went about as far as he could go for the Hogs, for the state.”

Pool, who broke Tony Bua’s program record for career tackles on Oct. 8 at Mississippi State, finished his career with 441 tackles. He played five seasons at Arkansas.

Pool had 92 tackles in 11 games this season, including 4.5 tackles for loss and 2 sacks.

Pittman was asked Friday if he expected Pool to try to continue his playing career professionally.

“I think if he comes back healthy and he feels good, I think he’ll give it a shot,” Pittman said. “I think if there’s anything coming from his surgery that he doesn’t feel great about, I think he wants to be a coach.”