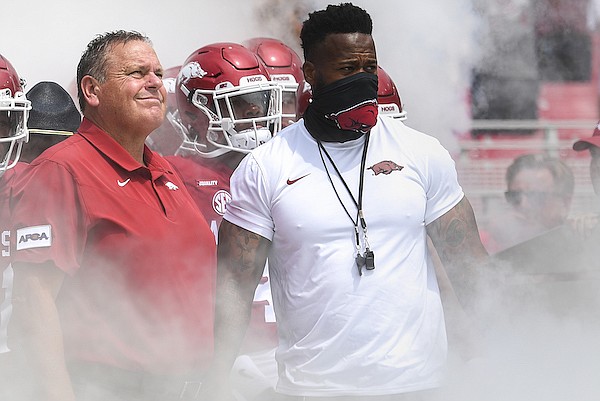 Arkansas strength coach Jamil Walker (right) stands next to head football coach Sam Pittman prior to a game against Rice on Saturday, Sept. 4, 2021, in Fayetteville.

The move came one day after the Razorbacks concluded the regular season with a 29-27 loss at Missouri to fall to 6-6 overall and 3-5 in SEC play.

Arkansas football coach Sam Pittman said the Razorbacks were “physically dominated” in the loss — their third in four games.

In March, Walker received a raise to $425,000 per year and an extension through February 2024. It was the second consecutive offseason that Walker received a pay raise. His salary also increased after he received interest from South Carolina following the 2020 season.

Walker was one of Pittman’s first hires at Arkansas in December 2019 after spending time with Pittman at Georgia, where Walker was the associate strength and conditioning coach for the Bulldogs for three years. He previously worked in a similar role at Wisconsin.

Walker played football at Wisconsin and was a member of the Badgers’ 12-1 team that defeated Arkansas 17-14 in the Capital One Bowl to end the 2006 season.