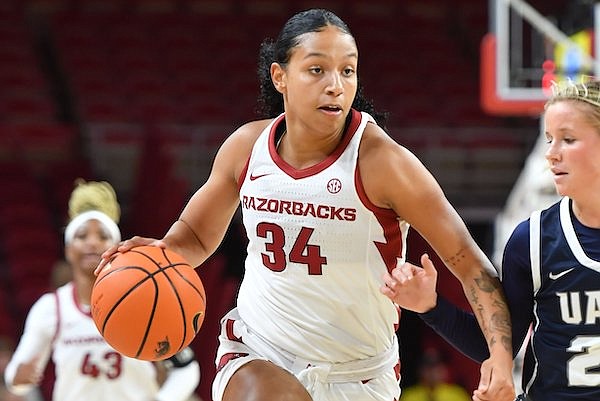 Arkansas guard Chrissy Carr (34) drives with the basketball Wednesday, Nov. 2, 2022, as Arkansas-Fort Smith guard Riley Hayes (25) defends during the first half of play in Bud Walton Arena in Fayetteville.

After scoring a season-low 24 points in the first half, the University of Arkansas women’s basketball team poured in 52 points after intermission to move past Clemson 76-62 on Friday night in St. Thomas, U.S. Virgin Islands.

It was the Hogs’ second of three games in the Paradise Jam. Arkansas will conclude its island stay against No. 25 Kansas State tonight in a battle of unbeatens.

Arkansas (7-0) jumped out to a 10-2 lead, helped by five early points from Chrissy Carr. The Tigers (3-3) then scored eight straight to the the game 10-10. Makayla Daniels hit two free throws then hit a deep three-pointer to give the Razorbacks a 15-10 advantage, but then Tigers responded with five straight points to tie the game 15-15 by quarter’s end.

Clemson took its first lead when Eno Inyang scored a layup with 2:27 left in the second quarter. Arkansas avoided its first halftime deficit of the season on Erynn Barnum’s bucket inside with nine seconds left to tie the score 24-24 at the half.

Both teams struggled mightily on offense in the second quarter. The Razorbacks shot 25% and the Tigers 26.7% during the period, combining for 18 points.

Daniels took things into her own hands in the third quarter. The senior from Frederick, Md., scored nine points and Saylor Poffenbarger hit a driving layup as the quarter buzzer sounded to give Arkansas a 49-37 advantage.

Things got chippy late. After committing a foul while defending an inbound play, Clemson’s Daisha Bradford bumped Daniels and got in her face, which warranted a technical foul. Daniels was then ejected in the process for saying words while walking away. Neighbors then was called for the team’s third technical while defending Daniels, and Clemson used the situation to pull within 65-55 with free throws.

Arkansas was able to fend off the Tigers from there, closing the game on a 12-7 run to claim its seventh victory in as many tries this season.

Daniels led the Razorbacks with 21 points. Carr and Poffenbarger chipped in 19 and 15 points, respectively, combining for seven three-pointers. Poffenbarger and Barnum each had a team-high nine rebounds.

Arkansas and Kansas State will tip tonight at 7 Central, streaming live on ESPN3.