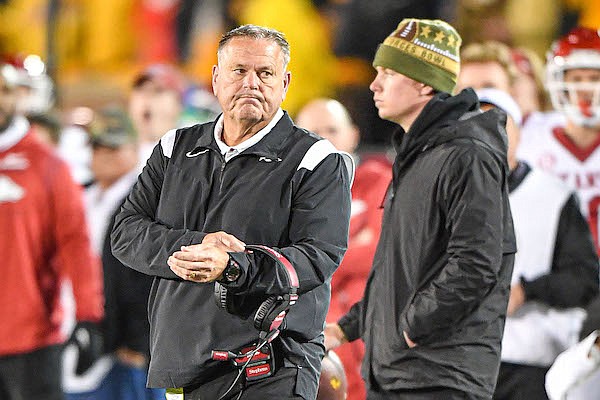 COLUMBIA, Mo. — A season that began 3-0 and sent hopes and dreams soaring ended on a penalty during a wild play that was hoped to lateral the ball numerous times for 68 yards and a game-winning touchdown.

The third lateral was forward, drew a flag and the Arkansas Razorbacks once again lost what should have been a winnable game to Missouri 29-27.

Arkansas finishes the season 6-6 overall and 3-5 in SEC play, and if the Liberty Bowl invites the Hogs to come on down, they shouldn’t hesitate.

That was the only bowl scouting Saturday’s game and the only one to see Arkansas play three times.

Take nothing away from the Missouri Tigers. They earned all 468 yards and every score. They hit the Hogs hard on the ground and harder through the air, but pass defense has been an Achilles heel since the first game of the season, when team captain and All-American Jalen Catalon was lost for the season with a shoulder injury.

The toll was even deeper Saturday as captain Bumper Pool was out following hip surgery and starting nickel back Myles Slusher didn’t make the trip for reasons that will be clear next week.

In fact, before the game the radio announcers for Missouri predicted neither team might be recognizable next season after the transfer portal opens next week.

Earlier in the week, Arkansas Coach Sam Pittman warned reporters they were going to be busy next week.

That is next week, for now the bitter taste of another loss to the Tigers has to be dealt with.

Arkansas is 0-5 in this city since Mizzou joined the SEC, a jinx that can’t really be explained.

Outside of 38-0 drubbing of a Chad Morris team, the losses have been by a total of 15 points.

For whatever reason, the Razorbacks started slow Friday, picked up the tempo and finished going three and out on two possessions and unable to pull off a miracle on its final possession that started 80 yards from glory with only 14 seconds to play.

On the other hand, Missouri started fast, scoring on three of its first four possessions and six of its first seven.

It was a lead that lived 4:51 into the second half after Missouri took the second-half kick and drove 75 yards for a touchdown.

The Tigers added a field goal on their next possession that started with a rare interception by KJ Jefferson and it was up to the Razorbacks to catch up.

They couldn’t. Missouri targeted Raheim Sanders from start to finish, holding the Hogs running back to 47 yards on 10 carries.

Arkansas’ defense struggled with Tiger quarterback Brady Cook, who rushed for a career high 138 yards and he also passed for 242 yards.

Now the Razorbacks come home to heal and wait on next Sunday’s bowl bids, which they are guaranteed of getting one.

Las Vegas on Dec. 17 versus a Pac-12 team is a favorite rumor, but only one bowl has openly flirted with the Hogs.

After finishing last season 9-4, including a New Year’s Day win over Penn State in the Outback Bowl and starting 3-0 this season, expectations grew. The Associated Press voters overestimated the start and ranked Arkansas No. 10.

After injuries and defections, they finished a respectable 6-6 and Memphis would be a nice spot to end the season.