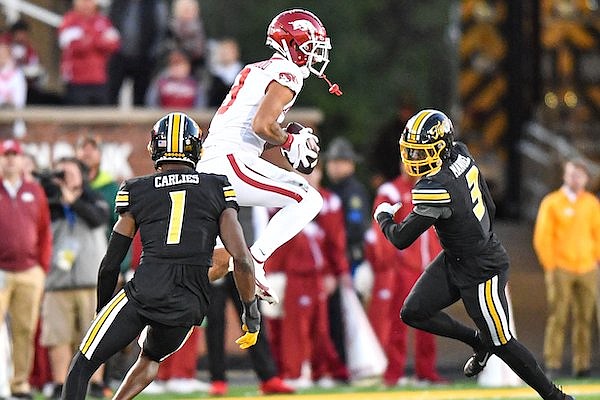 Arkansas receiver Jadon Haselwood (9) catches a pass during a game against Missouri on Friday, Nov. 25, 2022, in Columbia, Mo.

Haselwood has at least three catches in every game this season and a streak of 27 games with at least one reception.

The receptions streak started in 2019 when Haselwood was a true freshman at Oklahoma when had three catches for 25 yards in LSU’s 62-28 victory over the Sooners in the Peach Bowl, which was a College Football Playoff semifinal game.

Haselwood transferred from Oklahoma to Arkansas after last season.

“I wish we could’ve held up a little bit more [Friday in pass protection] so we could get some more balls to him,” Razorbacks Coach Sam Pittman said. “Haselwood’s a tough man, both mentally and physically. He’s much older than what his age is [21] to be perfectly honest with you. The way he acts, the way he carries himself.

Haselwood has accepted an invitation to play in the East-West Shrine Bowl, a college all-star game, but he could decide to skip it and return to Arkansas next season.

On the season, Haselwood has 59 catches for 702 yards and 3 touchdowns despite playing with a sprained joint in his shoulder.

“Yeah, it’s been beat up for a while,” Pittman said. “Now it’s gotten a little bit better. There for a while, you saw, he was in green [no contact jersey at practice] for quite a little bit. But it healed up a lot better the last four or five weeks.”

Arkansas safety Myles Slusher did not make the trip to Missouri after leaving the team.

“He came in, we visited on Sunday, and Sunday evening he quit the team,” Coach Sam Pittman said.

Pittman said Slusher’s decision surprised him, but he didn’t want to comment further when asked if it was disappointing a player would quit 11 games into the season.

“I don’t want to talk about that anymore,” Pittman said.

Slusher has two seasons of eligibility remaining and sources close to the team confirmed he intends to enter the transfer portal.

Slusher played in six games — all starts — this season and made 28 tackles with 5 tackles for losses for 13 yards. He missed four games because of injuries and was suspended for the LSU game after being arrested for disorderly conduct.

Slusher returned to the lineup against Ole Miss last week and had eight tackles. He played in 23 games over three seasons and had 93 tackles.

Sophomore Jayden Johnson started at nickel back Friday for the Razorbacks.

Barrett Banister, Missouri’s sixth-year senior receiver from Fayetteville, dressed out Friday, but didn’t play because of an injury.

Missouri’s victory over Arkansas made the Tigers bowl eligible, so Banister will have a chance to play another game rather than have his college career end with him watching from the sideline.

“I knew he wasn’t going to be able to play much pretty early in the week,” Missouri quarterback Brady Cook said. “I was like, ‘Dude,‘I’m going to win this game for you.’

“Because this is probably his Super Bowl, especially with bowl eligibility on the line.

“I hurt for him because he wanted to be out there so bad, but it was pretty sweet getting to celebrate with him tonight.”

When Missouri beat New Mexico State 45-14 last Saturday, Banister had seven catches for a team-high 91 yards, but he left the game in the fourth quarter with an undisclosed injury.

Banister went to Missouri as a preferred walk-on — meaning he took part in preseason camp as true freshman in 2017 — and was placed on scholarship in 2018 by Barry Odom, the Tigers’ coach from 2016-19 and now Arkansas’ defensive coordinator.

Arkansas junior linebacker Drew Sanders had seven tackles Friday to give him 103 on the season. He also had a sack to raise his season total to 9 1/2, which is tied for seventh-most in the season for the Razorbacks and the most by an Arkansas player since Chris Smith’s 9 1/2 in 2012.

Missouri quarterback Brady Cook had 18 carries for a career-high 138 rushing yards. His previous rushing high was 106 yards on 16 carries against Tennessee earlier this season, though that came in a 66-24 loss to the Volunteers.

Cook had the most rushing yards against Arkansas by an opposing quarterback since Kentucky’s Lynn Bowden had 29 carries for 196 yards and 2 touchdowns in the Wildcats’ 24-20 victory over the Razorbacks in 2019.

Bowden moved from receiver to quarterback for Kentucky because of injuries. He’s now a receiver in the NFL with the New England Patriots.

A defensive player can score two points on turnover on a conversion attempt, and Clark made it to the Razorbacks’ 32 on his return before being tackled.

Friday marked the 10th Arkansas-Missouri game for Arkansas defensive coordinator Barry Odom, who has been with both teams.

Arkansas beat Missouri 27-14 in the 2003 Independence Bowl when Odom was a graduate assistant for the Tigers.

Odom was a staff member with Missouri when the Tigers beat the Razorbacks 38-7 in the Cotton Bowl to cap the 2007 season.

He was Missouri's defensive coordinator when the Razorbacks won 28-3.

As Missouri’s head coach, Odom was 4-0 against Arkansas from 2016-19 with his last game leading the Tigers to a 24-14 victory over the Razorbacks in Little Rock.

After Friday’s game, Odom is 1-2 against Missouri as Arkansas’ defensive coordinator.

Arkansas fell to 4-10 against Missouri, including 0-6 at Columbia.

The Tigers are 7-2 against the Razorbacks in SEC matchups since 2014.

Arkansas’ lone victory over the Tigers in the state of Missouri was in 1944, when the Razorbacks won 7-6 at St. Louis.

Friday marked Sam Pittman’s seventh game against his former teams in 35 games as Arkansas’ coach since 2020.

Oehrlein, like Stein this season, didn’t have any bad snaps Friday. Stein didn’t play after he sustained a finger injury against Ole Miss.