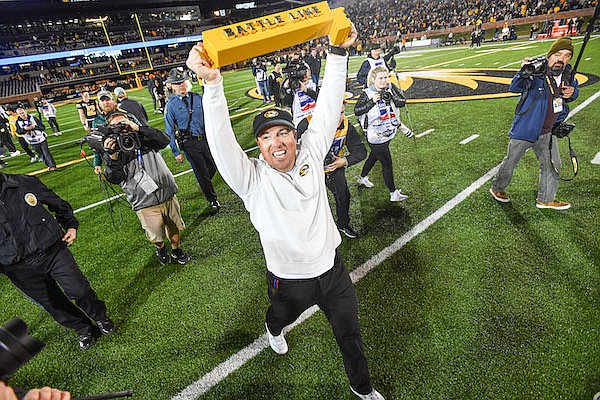 Missouri coach Eli Drinkwitz carries a piece of the Battle Line Trophy after the Tigers defeated Arkansas 29-27 on Friday, Nov. 25, 2022, in Columbia, Mo.

COLUMBIA, Mo. — The frenzy of Missouri’s sack-crazed defensive effort denied the University of Arkansas its last shot to retain any of its rivalry trophies.

The Razorbacks remained winless at Missouri by scoring just six points in the second half as the Tigers took a 29-27 win before a crowd of 55,710 at Faurot Field.

Arkansas (6-6, 3-5 SEC) had three possessions after pulling within two points early in the fourth quarter, but the Hogs could manage just 20 yards as Missouri consistently moved quarterback KJ Jefferson off his spot or put him on the ground.

“They whipped our butt,” Arkansas Coach Sam Pittman said when discussing the seven sacks for 36 lost yards. “That’s what happened. They whipped us.

Missouri (6-6, 3-5), spurred by its ferocious defense and the heady play of sophomore quarterback Brady Cook, gained its bowl eligibility. The Tigers rushed across the field to re-claim the 180-pound Battle Line Rivalry trophy and leave the Arkansas trophy case bare.

“What a great environment, a heck of a way for us to win the game,” Missouri Coach Eli Drinkwitz said. “Obviously down at halftime, come back, fight, big turnover in third quarter. And then defensively to get those stops in the fourth quarter right there.

“Nobody wanted to say it, but I think there was a lot of people that were just really … we just wanted it so bad. We wanted it so bad and try not to make it bigger than it was. But at the end of the day, we knew we were playing for one more [game].”

The Razorbacks lost the Southwest Classic to Texas A&M, the Golden Boot trophy to LSU and the Battle Line trophy by a total of seven points.

Arkansas fell to 0-4 in games decided by three points this season.

“Usually in a season they kind of even out, but this season they haven’t,” Pittman said. “We lost every one of them that was a field goal or less.”

Arkansas tailback Raheim Sanders had a chance to regain the SEC rushing lead over Ole Miss freshman Qunishon Judkins with 97 yards, but the Tigers limited him to 47 yards on 10 carries as they stuffed the box and over-ran the Hogs’ offensive front.

Isaiah McGuire and Martez Manuel had two sacks each to lead Missouri, while Darius Robinson, Kristian Williams, and Johnny Walker Jr. had one each.

On the other side of the ball, the Razorbacks struggled to contain Missouri’s quarterback run game with Cook, who torched the Hogs for a career-high 125 rushing yards in the first half and finished with 138.

“They played a very physical game,” Pittman said. “They out-physicaled us tonight on both sides of the ball. It’s unfortunate. We had several chances to win the game, but we couldn’t convert on offense and couldn’t stop them on defense. They had the more physical team tonight. That and the way Cook played is the reason they won the game.”

Trailing 29-24, the Razorbacks had a golden opportunity to retake the lead on a drive that began on the final play of the third quarter.

Trey Knox caught a short pass from Jefferson for a 3-yard gain to the 50, and DJ Coleman drew a personal foul penalty for a late hit to sent the Hogs to the Missouri 35 for the first play of the fourth quarter.

Sanders broke off a tackle-breaking 17-yard gain to the 18 on the first snap, then Jefferson ran for 13 yards to reach first and goal from the 5.

The Razorbacks kept up the pace as Ketron Jackson drew an interference call from Ennis Rakestraw on a slant pass in the end zone, setting up first and goal from the 2.

That’s where the Missouri defense put up a stone wall.

Jefferson was stopped for no gain on a quarterback run on first down. On second down, Knox went in motion from tight end, lined up behind center and ran a sneak, but it went nowhere. Jefferson threw incomplete for Jackson on third down and Pittman elected to kick a field goal.

“It was first-and-goal from the 2,” Pittman said. “We ended up fourth-and-2. There were about [12] minutes left in the game. I felt like we could cut it down to a field goal.

“We had three timeouts left. Obviously, there was another opportunity there. I chose to take the points and cut it to two because we hadn’t made a yard in the three previous plays.”

Arkansas led 21-20 after an entertaining first half.

The Tigers scored on their first four possessions, but two of those wound up being Harrison Mevis field goals after Arkansas bowed up in scoring territory.

The Razorbacks went three and out on their first possession for the fifth consecutive game, but then heated up behind Jefferson.

Trailing 3-0, Jefferson had time to read the whole field on a first-down play and connected with Matt Landers for a 37-yard gain to the Tigers’ 17. Sanders’ 10-yard run set up Jefferson’s 3-yard keeper up the middle for a 7-3 Arkansas lead.

Missouri got a stop on the next Hogs series and went up two scores at 17-7 when Cook zipped up the middle for a touchdown on a 9-yard draw on the first play of the second quarter.

The Razorbacks answered right back, marching 75 yards in 12 plays. Jefferson eluded a sack attempt from Isaiah McGuire to hit Jadon Haselwood for 19 yards on second and 18 to key the drive. On third and 8, Jefferson lofted a fade down the left edge and Landers secured the ball for a 27-yard touchdown with two hands around the arm of Kris Abrams-Draine before the cornerback grabbed the ball himself and they both tumbled to the turf.

Jefferson went back to work, finding Landers for a 12-yard reception, then running for 12 yards.

The key play on the drive was on third and 6, when Haselwood went in motion, headed back to the right and grabbed a swing pass that he turned into a 20-yard gain to the 23. Sanders scored on an 8-yard wheel route to give the Razorbacks a 21-20 edge.