Hornsby, others announce intent to transfer 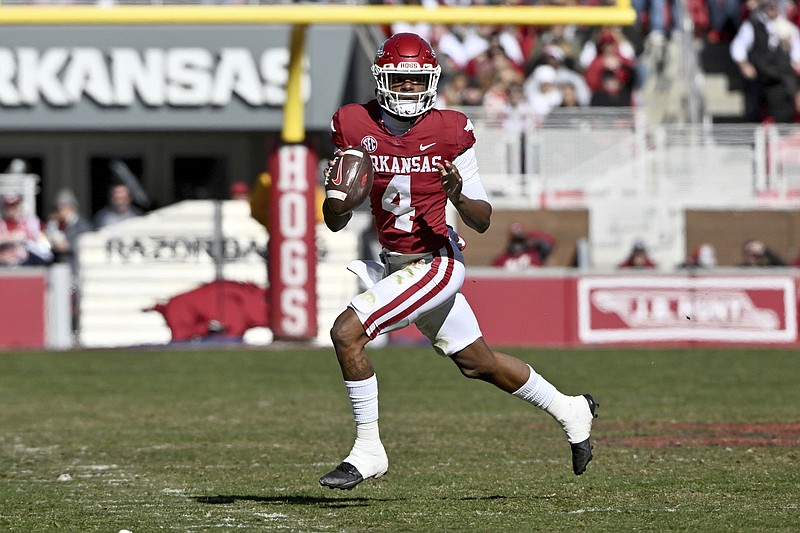 Arkansas quarterback Malik Hornsby (4) runs out of the pocket against LSU during the first half of an NCAA college football game Saturday, Nov. 12, 2022, in Fayetteville, Ark. (AP Photo/Michael Woods)

FAYETTEVILLE — University of Arkansas quarterback Malik Hornsby said Monday he will enter his name in the NCAA transfer portal for the second consecutive year.

"First and foremost I want to thank Coach (Sam) Pittman & Coach (Kendal) Briles for giving me the opportunity to play here at the University of Arkansas," Hornsby wrote in a post to his Twitter account. "I want to thank my family, friends, and supporters that I have gained along the way. To my teammates, my brothers, I will cherish every moment we had.

"Thank you Razorback Nation. My journey here as a Razorback has come to an end. I will make the best decision for me and my future. I am entering my name in the transfer portal."

Hornsby, a 6-2, 186-pound redshirt sophomore, also entered his name last winter, but he withdrew it a few days later after talking to Pittman and receiving assurances that he would compete for the starting quarterback job with KJ Jefferson.

Hornsby had 2 carries for 21 yards and 2 catches for 8 yards in light use through the first 5 games. However, he came in as a backup to Cade Fortin behind an injured Jefferson in a Week 6 loss at Mississippi State.

After that game, Pittman said Hornsby would work only at quarterback as the second teamer behind Jefferson.

Hornsby got a start against LSU in place of the injured Jefferson and struggled. He finished 4-of-9 passing for 24 yards, and had 18 carries for 37 yards.

Against the Tigers, Hornsby was sacked four times, lost a fumble and slipped down for lost yardage on a key fourth-down play.

According to 247 Sports, Hornsby was the No. 5 dual-threat quarterback in the country in his recruiting class. He initially signed with the Razorbacks over scholarship offers from Alabama, Auburn, Florida State, Georgia and other programs.

More roster movement for the Razorbacks:

Thomas this season played 91 total snaps, according to Pro Football Focus, including 75 on special teams. His last defensive snap came in Week 9.

Johnson played 258 defensive snaps this season. Like Thomas, his final snap on the defensive side of the ball was in Week 9.

Thomas recorded two tackles and Johnson was 13th on the team with 25 stops.

A redshirt sophomore from Atlanta, Turner recorded one tackle in the Razorbacks' win over Ole Miss on Nov. 19. According to PFF, he played 62 snaps on special teams, 44 on kickoff return.

“I’m forever thankful for the University of Arkansas, Coach (Sam) Pittman, Coach (Barry) Odom, teammates, and all of the Hogs fans,” he wrote. “Thanks for the opportunity to better myself through football, education, forming relationships, and experiences.

“I’ve had to face adversity, which has built the endurance and drive in me today.”

“First and foremost I want to thank Coach (Sam) Pittman and Coach (Dowell) Loggains for blessing me with the opportunity to play the sport I love,” he wrote. “I also want to thank the razorback nation for the experience. I want to thank my family and friends for supporting me through the process.

“I have decided that I will be entering the transfer portal.”

A redshirt freshman from Parkview in Little Rock, Outley did not record any statistics for the Razorbacks. He was a 3-star prospect in his recruiting class, according to 247 Sports, and considered the 19th-best tight end by ESPN.

Slusher's announcement came two days after he did not travel with Arkansas' football team for its regular-season finale against Missouri and three weeks after his arrest in connection to disorderly conduct.

“First, I would like to thank the University of Arkansas for everything,” Slusher wrote. “Helped me learn myself more than anything, especially overcoming adversity. I want to thank Coach (Barry) Odom for believing in me.

“With that being said, I will be entering the transfer portal to find a new home.”

Pittman said after the 29-27 loss to the Tigers last Friday that Slusher quit the team on Nov. 20, the day after the Razorbacks defeated Ole Miss 42-27 to become bowl eligible. Slusher had eight tackles and one stop for lost yardage in the win.

A reporter followed up and asked Pittman how disappointing it was that Slusher left the team.

“That’s it,” Pittman said. “I don’t want to talk about that anymore.”

“Also want thank Razorback Nation,” he wrote. “Y’all made this home and stayed down through thick & thin. Won’t never forget the moments. My twitter only let me type certain amount of words first post.”

• Chase Lowery, who signed with the Razorbacks as a defensive back before moving to wide receiver this fall, stated plans to transfer on Nov. 24 in a post to his Twitter account.

“The memories and things I’ve learned will go with me for the rest of my life,” he wrote in part. “Would also like to thank all my teammates for making the transition to college one to remember.

“I will be entering the Transfer Portal heading into the 2023 season.”

• Freshman running back James Jointer of Parkview announced via Twitter on Nov. 21 that he would be entering the transfer portal.

Jointer had 3 carries for 9 yards while playing in 1 game.

Pittman last week said Jointer had not talked to him prior to making the decision.