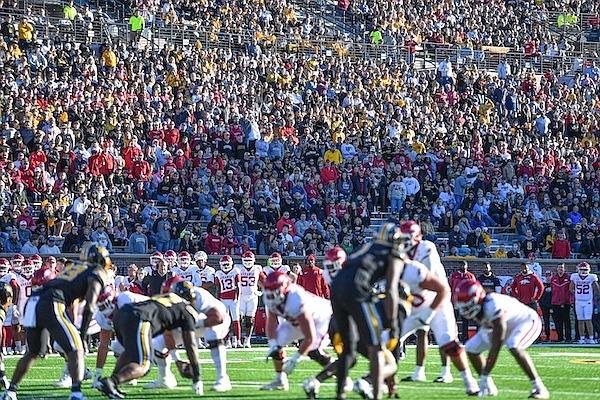 The Faurot Field crowd is shown during a game between Arkansas and Missouri on Friday, Nov. 25, 2022, in Columbia, Mo.

FAYETTEVILLE — Missouri’s Faurot Field remained one of the two SEC venues in which the Arkansas Razorbacks have never won a game following Friday’s 29-27 loss to the Tigers on the day after Thanksgiving.

The University of Arkansas fell to 0-6 at Memorial Stadium with its second-consecutive loss by two points on the road at Missouri. The Razorbacks took a 48-47 lead on the Tigers with 43 seconds remaining in the 2020 game there before Harrison Mevis made a game-winning field goal with no time left on the clock.

The Razorbacks have won at every other SEC venue with the exception of Florida’s Ben Hill Griffin Stadium, where the Hogs are 0-5.

Arkansas is unbeaten at one SEC venue, Vanderbilt, where the Hogs are 4-0 at what was formerly Vanderbilt Stadium and is now FirstBank Stadium.

Arkansas has a 17-15-1 mark at Texas A&M’s Kyle Field, its highest win total and second-best winning percentage (.530) in road games at SEC opponents.

The Razorbacks are 8-8 against Mississippi State at Davis-Wade Stadium. They have a losing record at each of the eight other SEC stadiums.

Arkansas has played its fewest division crossover road games at Kentucky and Vanderbilt, the teams in the SEC East that have traditionally been near the bottom of the standings.

Arkansas went three and out with its first possession for the fifth consecutive game.

The Razorbacks finished the regular season with only one first-possession touchdown, Raheim Sanders’ 1-yard run in Week 2 against South Carolina.

“It’s hard to score on your first drive, I get that,” Pittman said. “But one for the whole year is not very good. We’ve got to get it fixed somehow.”

Coach Sam Pittman had a chance to go 2-1 against each of the other coaching hires with whom he joined the SEC head coaching ranks at the same time in the 2019-20 cycle.

However, the loss to Missouri dropped him to 1-2 against Tigers Coach Eli Drinkwitz and 5-4 against the class of third-year coaches.

Missouri quarterback Brady Cook was a difference maker against the Razorbacks with a career-high 138 rushing yards and 242 passing yards.

The sophomore set the tone with multiple called runs in the first half, plus several chain-moving scrambles.

“Obviously his rushing ability was really what separated us this game, gave us a chance to win. He gets beat to hell, he’s got shoulder issues and all that kind of stuff. He just keeps getting up, looks at me with a smile on his face and says ‘Let’s go.’”

Pittman said Cook’s running over the last few games had the Razorbacks on the alert.

“Seemed to me like Coach Drink had that in his game plan that he was going to feature him because over the last two and a half games he’s been their best runner,” he said.

“We had him hemmed and then he’d bounce outside. I mean, we lost contain and we could never get him turned back inside. Then they had some designed inside runs, like the one he scored the touchdown on. But they only punted one time in the first half and that was right before the half. It was we couldn’t tackle them or we couldn’t cover them.”

The Razorbacks tried a bit of a sneaky play on the Missouri 2-yard line early in the fourth quarter while trailing 29-24 by having tight end Trey Knox go in motion then settle under center Ricky Stromberg.

Knox took the snap on second and goal and tried to go up the middle but the Tigers plugged the A gaps and stuffed him for no gain.

“It wasn’t there,” Sam Pittman said. “There were a pair of Gs in there, or a pair of shades [on the interior], however you want to look at it. That one there, we should have went to something else. It just wasn’t there.

“It was a surprise thing we felt like we could sneak it in, but it just wasn’t there.”

Arkansas settled for Cam Little’s 20-yard field goal after the seven-play, 51-yard drive stalled at the 2.

The Hogs finished the regular season ranked 76th in red-zone scoring percentage, going 42 of 51 (82.4%) on possessions inside the opponent 20-yard line. Arkansas has a 64.7% touchdown rate in the red zone, good for 51st in the nation.

The Razorbacks lost the turnover battle 2-0 against the Tigers to wind up minus-1 on the season in turnover margin. Arkansas created 15 takeaways and committed 16 turnovers during the regular season.

KJ Jefferson threw his fourth interception of the season in the third quarter. After escaping a would-be sack, Jefferson rolled right and under-threw Trey Knox on the run. Missouri defensive back Daylan Carnell made a leaping interception to set up a Harrison Mevis field goal.

On the final play of the game, the Razorbacks lost a fumble at the end of a series of laterals and fumbles that actually went backward. Jefferson completed a pass to Jadon Haselwood, who lateraled to Trey Knox, who tried an illegal forward lateral that wound up being recovered by center Ricky Stromberg, who also lateraled backward where Dreyden Norwood recovered for the Tigers.

Missouri Coach Eli Drinkwitz liked the Tigers’ ground attack with quarterback Brady Cook a willing runner to go along with tailback Cody Schrader, who had 87 yards on 18 carries and a touchdown.

However, Missouri was prepared to go to the air and did, with Cook completing 16 of 26 passes for 242 yards and 1 touchdown.

“I definitely think we were more aggressive today,” Missouri Coach Eli Drinkwitz said in his postgame news conference. “I’m not trying to throw shade on anybody, but they’re ranked 100-something in pass defense. So it wasn’t like we weren’t gonna have to go after them. That was our best matchup.”

Former Arkansas footballers Glen Ray Hines and Jimmy Walker and baseball player Jeff King were announced on Sunday as part of the 2023 class of inductees into the Arkansas Sports Hall of Fame.

The class of nine will be inducted on April 23 at the Statehouse Convention Center in Little Rock.

Hines, who will be honored posthumously, was a member of the 1964 national championship team and the first offensive tackle in school history to earn All-America honors in 1965. A member of the UA’s All-Century team and its All-Decade squad of the 1960s, Hines had an eight-year NFL career with the Houston Oilers, New Orleans Saints and Pittsburgh Steelers and played in 115 consecutive games. Hines has also been inducted into the UA Sports Hall of Honor (2001), the Union County Sports Hall of Fame (2012) and the Southwest Conference Hall of Fame (2018).

Walker, of Little Rock and Central High, was a first-team All-America defensive tackle for the Razorbacks in 1978, when he was chosen as the outstanding defensive player in the Fiesta Bowl after a 10-10 tie with UCLA. A two-time All-SWC player, Walker led the team in tackles for loss with 15 in 1977 and 19 in 1978. He was chosen to the UA All-Decade team of the 1970s.

Walker has been previously inducted into the UA Sports Hall of Honor (2011) and the Southwest Conference Hall of Fame (2018).