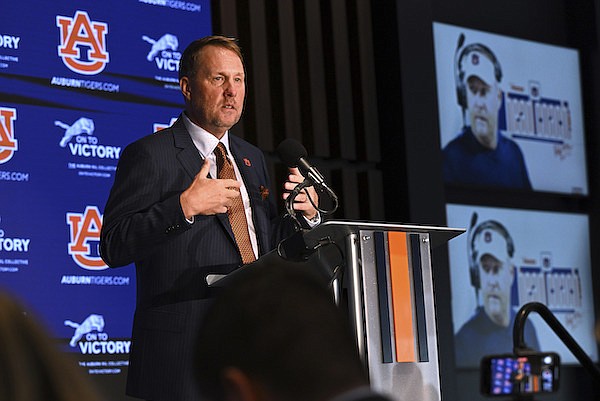 Hugh Freeze’s hiring at Auburn was received with mixed feelings by the fans.

Some fans opened their heart to him, and apparently some think five years wasn’t a long enough sentence.

What those fans are thinking about is a misdeed that his wife and family forgave, but what most likely kept him out of the SEC was the “lack of institutional control” the NCAA hit him with while coaching at Ole Miss.

Now some of his infractions are legal. Paying players, thanks to the Supreme Court, is the rule now.

Freeze has some work to do with some of the fan base, but he faces a mountain of a challenge in dealing with the boosters who seem to make all the calls at Auburn.

As for football, if history is any indication of the future, he and the Tigers will be just fine.

He can recruit and if you need a reminder of his coaching abilities, you didn’t watch Liberty come to Fayetteville on the first Saturday of this month and get a win.

Freeze is the third consecutive head football coach Auburn has hired who spent time as the head coach at Arkansas State, and he left a lot of friends in Jonesboro.

One of the first thing Freeze did was hire Carnell “Cadillac” Williams as associate head coach, something even his detractors were happy about that.

Freeze’s agent, Jimmy Sexton, has gotten into representing assistant coaches, so he’ll probably have no problem putting together a top shelf staff.

His biggest chore will be keeping the rich folks happy, something none of the coaches have been able to do for almost three decades.

Winning at a program that went from proud to a dumpster fire is very important, and Freeze knows how to win.

The bowl situation seems to be getting serious.

One prediction has Ole Miss dropping to the Music City Bowl after losing to Mississippi State, which may have played itself into Gator Bowl.

South Carolina closed its regular season in an orange kind of way, beating Tennessee 63-38 and then stunning Clemson 31-30. The Gamecocks have jumped up to the ReliaQuest Bowl in Tampa, previously called the Outback Bowl.

Arkansas apparently is on the list of several bowls and a big part of that is the great fan base the Razorbacks have.

An interesting matchup could be the Razorbacks taking on Baylor in the Liberty Bowl or meeting UCLA in Las Vegas.

Everything is speculation until Sunday night when the official bowl bids go out, which is the same day football players can officially enter the transfer portal.

Someone always gets left out the four-team College Football Playoffs, and when it expands there will still be teams who believe they deserved in but were forgotten.

This year that ignored team might be Ohio State, whose only loss, albeit a beatdown, was to Michigan which needs only to get its heads out of the clouds and beat Purdue to be in the Final Four.

There is one team that could throw a huge monkey wrench into the CFB workings: LSU.

If the Tigers knock off No. 1 Georgia in the SEC Championship Game on Saturday, it could mean the end of a dynasty. There has always been a SEC team in the playoffs, but how could the committee take Georgia if it loses to the Tigers, who have three losses including last Saturday’s stinker to last-place Texas A&M?

In its past two games, LSU was looking backwards at Alabama when it played Arkansas and when it went to College Station, it was looking ahead to this week.

If Brian Kelly gets his team focused again, it is capable of beating Georgia if the Bulldogs are not mentally ready.