5 observations from Arkansas' loss to Alabama 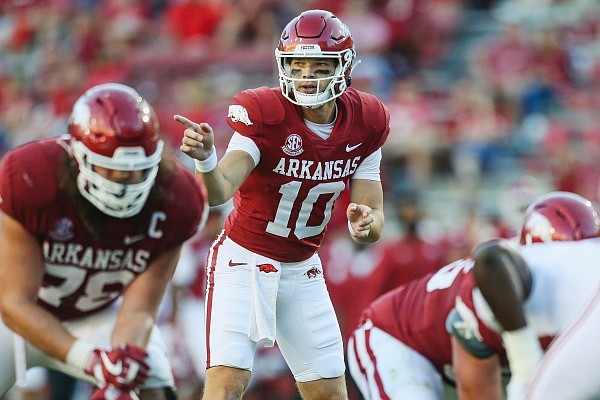 Arkansas quarterback Cade Fortin (10) is shown during a game against Alabama on Saturday, Oct. 1, 2022, in Fayetteville.

FAYETTEVILLE — Malik Hornsby was noticeably frustrated on Arkansas’ sideline late in the 20th-ranked Razorbacks' 49-26 loss to No. 2 Alabama on Saturday.

Listed as Arkansas’ back-up quarterback on the team’s depth chart, Hornsby did not enter the game in the fourth quarter after starter KJ Jefferson was injured on a rush attempt. Cade Fortin, a transfer from South Florida, took the field in his place.

Fortin finished the game 4-of-10 passing for 35 yards and threw incomplete on 6 of his first 8 passes.

As the Razorbacks’ offense was on the field, Hornsby spent time pacing the sideline and sitting on a stationary bike. Arkansas coach Sam Pittman said after the loss that Fortin has long been the team’s No. 2 option at the position.

At one point in the fourth quarter, Hornsby appeared to begin removing his shoulder pads on the south end of the Razorbacks’ sideline, but defensive lineman Taurean Carter, who is not active due to an injury suffered in mid-April, put a stop to it. As the game clock ticked to all zeros, Hornsby was the first Arkansas player to walk into the team tunnel in the northwest corner of the stadium.

If Hornsby is not the Razorbacks’ back-up quarterback nor being utilized in either the running game or passing game, what exactly is his role with Arkansas right now and moving forward?

As far as Jefferson’s status, Pittman did not have an update after the game.

"He hit his head. I don't know,” he said. “I don't know where he's at, to be honest with you. Obviously we didn't bring him back in. I don't know any more than that.”

As a whole, it is probably fair to say Arkansas in 2022 has a more talented group of receivers than in 2021.

But what this year’s cast of pass catchers is missing is a go-to weapon, a player who demands targets and great attention and is capable of taking over a game when it is needed. The Razorbacks will enter Week 6 of the schedule against Mississippi State still not knowing who its Alpha is.

“On offense, we have to throw the ball better,” Pittman said. “Right now, we're one dimensional. We have to be able to throw and catch and protect and all those things. It has to be better because we can't just turn and hand the ball off and beat really good teams.

On Saturday, sophomore Ketron Jackson looked the part of the team’s best receiver. He finished with 4 catches for 48 yards and his second touchdown in as many games.

Jackson stepped in against the Crimson Tide and produced more catches than he had in the previous four games combined. Aside from Jackson, Arkansas receivers Jadon Haselwood and Matt Landers totaled eight grabs for 68 yards.

Tight end Trey Knox had the passing game’s biggest gain, a 36-yard play that helped set up running back AJ Green’s 13-yard touchdown run that pulled the Razorbacks within 28-14 in the third quarter. Pittman noted receiver Warren Thompson did not play because of an undisclosed injury.

“We did try throwing some a time or two, but maybe something a little quicker where maybe we can take advantage of some slants and things of that nature.”

In the preseason, there was lots of chatter about Landers' speed and his value as a deep-ball threat. Arkansas quarterbacks had a tough time connecting with him Saturday.

He finished with 2 catches for 31 yards on a team-high 10 targets.

A big key for Arkansas if it hoped to compete with the Crimson Tide lied in its ability to get Alabama off the field after third down. The Razorbacks found that difficult.

The Crimson Tide converted 6 of 8 third-down tries in the first half as they raced to a 28-0 lead and 28-7 halftime advantage. They were 3 of 6 in the second half.

“That was a big, big play,” Pittman said. “I’m proud of the team for the way we came out and fought back into the game. We were in it — in it. That play right there seemed to take the wind out of our sails.

“We couldn't convert the next time we had the ball, but that was a big, big play.”

Arkansas’ defense allowed the Crimson Tide to rack up 125 passing yards on 4 completions on third down, and they also rushed seven 7 for 100 yards on the down. Alabama had gains of 47, 53, 22, 12 and 77 yards when facing third down.

Those plays made up 38% of the Crimson Tide’s total offense.

Alabama’s nine third-down conversions are its most in a game this season, and the most allowed by Arkansas in five games. It is also the most conversions allowed by the Razorbacks since losing 52-3 to the Crimson Tide in the 2020 season finale (10).

On the flip side, Arkansas converted 5 of 16 third-down tries. It marked the third consecutive game in which the Razorbacks failed to convert more than 40% of their attempts on the down.

When Alabama quarterback Bryce Young exited Saturday’s game with a shoulder injury, the Crimson Tide’s plan on offense shifted more toward the run, but Alabama still trusted Milroe to throw the ball a few times.

The Razorbacks’ pass rush was not able to get home. Alabama transfer linebacker Drew Sanders registered the team’s lone sack.

Arkansas recorded just three quarterback hurries, and the Razorbacks’ inability to get to the quarterback resulted in the Crimson Tide finishing with 6 pass plays of at least 17 yards, including 3 of 40-plus yards.

Arkansas had 14 sacks over a two-week stretch against South Carolina and Missouri State and led college football with 20 entering this week. Arkansas has three sacks combined in its two losses.

Next up for the Razorbacks is pass-happy Mississippi State, which entering Saturday had allowed nine sacks in four games.

Getting to the quarterback and limiting the possibility of big plays in the passing game — likely just rushing three linemen — will again be critical.

Arkansas was able to steal a possession from the Crimson Tide on Saturday thanks to a beautifully executed onside kick recovered by kicker Jake Bates. Back-up linebacker Chris “Pooh” Paul aided the success of the play by blowing up multiple Alabama players prior to Bates’ recovery.

The Razorbacks had to settle for a field goal on the ensuing drive, but they chipped into Alabama’s lead and made it a 28-17 game.

"Seeing it on tape, we felt like it was there,” Pittman said. “Bates was really good at it. He had done it at his previous school (Texas State). It just seemed like the right time to use it.

“It worked and we went down and scored, so that was a good deal.”

In terms of punt coverage, Arkansas gave Alabama’s Kool-Aid McKinstry, the national leader in punt return yardage entering the weekend, too much space to operate. He had three returns for 75 yards.

His biggest play was a 45-yard return on a 51-yard Max Fletcher punt that set the Crimson Tide up at the Arkansas 17. Three plays later, Alabama took a 21-0 lead on Milroe’s short touchdown run.

Yardage-wise, Fletcher had his best day of the season. He had a long punt of 51 yards, a 42.5-yard average and 3 punts were downed inside the 20. Pittman did not think the returns by McKinstry were instances of Fletcher out-kicking his coverage.

“A couple of times we kicked out of the zone, and one time we had a gunner on the wrong side of the field,” he said. “We didn't have a boundary gunner. Ironically, he returned it to the field, so we had a guy over there, but we couldn't make the play.

“But I believe the boundary gunner probably would have had a fair catch, but we lost that side."

The Razorbacks finished with one punt return for 13 yards. They did not have any kick return yards or attempts for the second consecutive week.