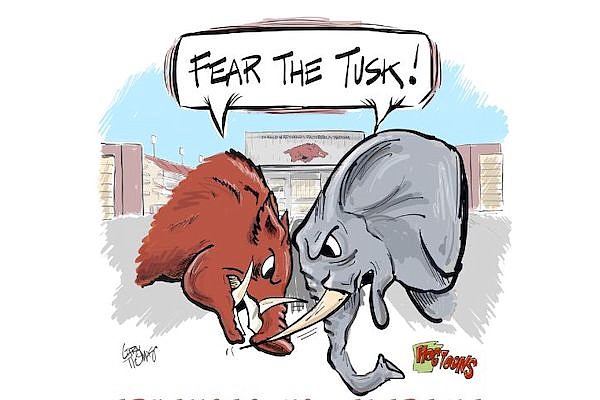 FAYETTEVILLE — Not since Ben Cleveland performed the chicken dance in the north end zone at Reynolds Razorback Stadium 16 years ago has the University of Arkansas danced in a locker room after playing Alabama.

A national CBS audience will be tuned in to see the Razorbacks’ come at the Crimson Tide with a “Red Out” in a jam-packed stadium in an effort to end their 15-game losing streak in the series.

“I think our crowd’s going to make a difference in this game,” Pittman said on his radio show this week. “I believe that. I think it’ll be one of the largest crowds we’ve ever had and it’ll be maybe the loudest crowd, or as loud as we’ve had. I think they’ll make a big difference in the game. We need them to.”

Alabama is more than a two-touchdown favorite to extend the streak, which is the longest by any opponent against Arkansas in school history.

Alabama Coach Nick Saban projected a rugged game was in store while praising the quick build Pittman has accomplished in his third season.

“Sam’s done a great job there, to me,” Saban said. “They play with toughness. They run the ball effectively, stop the run on defense. I mean, their guys play hard. They’ve got a real culture there that shows great intangibles. … This will be a really tough game for us.”

The game will feature two of the nation’s top quarterbacks in Alabama’s reigning Heisman Trophy winner Bryce Young, who is featured on national commercials for Dr Pepper and Nissan this season, and Arkansas’ KJ Jefferson. The two have comparable stats and on the leading edge of dual-threat quarterbacks who are starting to assert dominance in college football.

Alabama has run the crowd out relatively early in recent games at Razorback Stadium, winning the past three by a combined 103 points.

Clearing out crowds is the preferred M.O. of Alabama defensive end Will Anderson Jr., who was fifth in the Heisman voting last season. He somewhat facetiously said that this week when asked if he was a “hateful” player on the field.

The 2006 Razorbacks overcame three interceptions, a paltry 269 total yards and a missed extra point to claim their last win in the series.

Cleveland pulled out the chicken dance after catching an 11-yard touchdown pass on third down from his former Springdale High School teammate Mitch Mustain in double overtime on Sept. 23, 2006. After the Crimson Tide’s kicking meltdown that day, which included 1 of 4 on field-goal tries, including a 37-yard miss by Leigh Tiffin that would have won the game in the first overtime and a missed extra-point attempt in double overtime, Arkansas kicker Jeremy Davis needed to provide the game-winning point and he did it to cap the 24-23 win.

Arkansas, with its fifth win over Alabama in nine years, went on to reel off 10 consecutive victories, push into the top 10 and win the SEC West under Houston Nutt.

Alabama faded to 6-7 and fired coach Mike Shula. Then-athletic director Mal Moore, after being rebuffed by Pittsburgh’s Rich Rodriguez, played the long game and hired Saban away from the Miami Dolphins in January 2007. The hiring has changed college football for the past decade and a half as Saban switched the Tide to dynasty mode with six national championships.

“I have nothing but wonderful things to say about him,” Pittman said. “He’s the greatest coach of all-time in college football, in my opinion.”

The game will be bittersweet for Arkansas linebacker Drew Sanders, who was named Friday as the Butkus Award national linebacker of the month after compiling 5.5 sacks to tie for the FBS lead. The junior, a 5-star prospect out of Denton, Texas, began his career at Alabama in 2020 before entering the transfer portal last winter.

“He’s a mature guy,” Pittman said. “I assume it won’t affect him too much.”

The Crimson Tide has one blowout road victory with Young behind center, a 49-9 win at Mississippi State last year. The other four true road games during Young’s tenure have been one-score games, including a loss at Texas A&M last year.

Young said he is well aware Arkansas leads the country with 20 sacks.

“We have a ton of respect for them and their pass rush,” he said. “They have amazing rushers. Obviously they’ve been really productive and create sacks and are doing a lot of things up front.”

Pittman said he understands things will need to break his team’s way to snap the streak.

“Well, Alabama can beat you before you ever run out on the field,” he said.

Last year’s result, when Arkansas was trying an onside kick with 1:02 remaining after Raheim Sanders’ highlight-reel 17-yard touchdown catch pulled the Razorbacks within seven, has given the program hope.

“Every team is beatable,” Sanders said. “Of course they’re good. They’ve got good coaches and good players. They don’t mess up. … They’re disciplined. We’ve just got to go out there and just attack.”

“We could definitely hang with them,” he said. “I never just looked at them like … they’re a great team, don’t get me wrong. They’re a great team. I just feel like we should look at everybody the same you know?”

Added Arkansas tight end Trey Knox, “The streak, we’re not really worried about it. We just want to go out there and play really well, get that sour taste out of our mouth from last week and get back into the win column.”

Arkansas defensive end Zach Williams played up the potential upset to fans at the Catfish Hole restaurant during his appearance on Pittman’ radio show.

“I feel like we just have a better chance than ever to just try our best to just beat them,” he said. “When y’all see the Hogs win, don’t be acting surprised now.”

Above all, Pittman said, a team has to believe in itself to beat Alabama.

“You have to have that belief and you’ve got a chance,” he said. “If you have a whole team full of guys that believe they can win, you have a chance.”