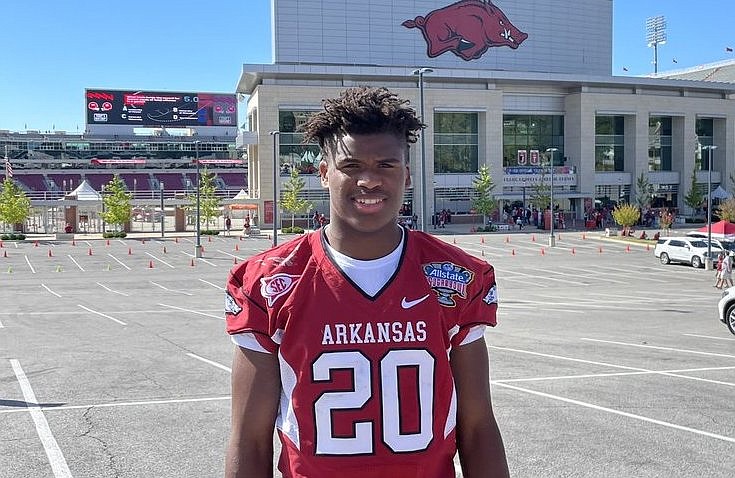 Junior 5-star receiver target Ryan Wingo was able to relive one of the highlights of his brother’s days as an Arkansas football player while visiting for the Razorbacks' game against Alabama on Saturday.

Prior to the game, the video screens showed his brother, former Arkansas running back Ronnie Wingo, score a touchdown on a 43-yard wheel route during a 2010 game against against Alabama that many say is when Razorback Stadium was at its loudest.

“That was pretty nice. My dad didn’t get to see it because he was walking down with some food,” Wingo said. “I was wondering if they were going to play it. One of my friends was like, 'They’re playing it,' and I looked up and they were playing it. It was nice to see it.”

He visited Pittsburgh, Texas A&M and Tennessee before visiting Fayetteville.

After the Hog Walk was completed, Arkansas coach Sam Pittman escorted Wingo near the locker room and talked to him for about five minutes.

“He made sure for me to see him,” said Wingo, who also spoke briefly with receivers coach Kenny Guiton. “We couldn’t talk that long because I think he had a set time to get out to talk to other visitors upstairs.”

He wore his brother’s No. 20 jersey to the game, which attracted attention from the Razorback fans.

“Probably the most said thing was, 'Your brother was there for us,' or something like that. Or, 'Are you related to him?'" Wingo said.

When fans realized who he was, they requested photos with him.

Arkansas started slow and made a comeback in the third quarter before the Crimson Tide pulled away in the fourth quarter to win 49-26.

“Yeah, it didn’t start off too well, but I was like….they have a good team, they had a little adversity,” Wingo said. “They started to come back and then it kind of got away from them.”

The trip was his third to Arkansas as a recruit for a Wingo. He visited for the Texas football game last year and again in March.

“It was just another good day visit up there, like every visit that I’ve been on there,” Wingo said. “It was (good) to get there for another game, especially a big game. A lot of people were there and the atmosphere was good, even though they didn’t pull off the win.”

He indicated another trip to Fayetteville would likely happen.

“Probably this spring or next summer,” Wingo said.