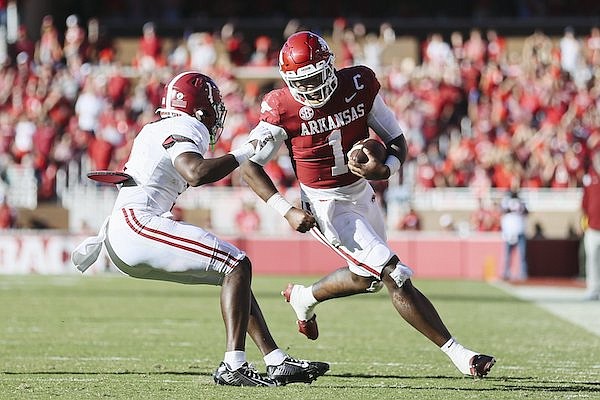 Arkansas quarterback KJ Jefferson (1) carries the ball during a game against Alabama on Saturday, Oct. 1, 2022, in Fayetteville.

FAYETTEVILLE — Neither starting quarterback finished the game in No. 2 Alabama’s 49-26 victory over the No. 20 Arkansas Razorbacks on Saturday.

Young was replaced by redshirt freshman Jalen Milroe and didn’t play the rest of the game.

University of Arkansas junior starter KJ Jefferson left the game for a play in the fourth quarter after being sacked and was replaced by Cade Fortin, then came back into the game.

“He hit his head,” Razorbacks Coach Sam Pittman said of why Jefferson left the game. “I don’t know where he’s at [physically] to be honest with you.

“Obviously, we didn’t bring him back in. I don’t know any more than that.”

Sophomore Malik Hornsby is listed on the depth chart as Arkansas’ No. 2 quarterback, but he didn’t play.

Pittman said Fortin is the backup behind Jefferson.

“That decision has been made for a while,” Pittman said. “He’s our number two quarterback, so we put him in there.”

“We’ll have to take it day-to-day,” Saban said. “I think he’s okay. He doesn’t have a serious injury. He didn’t go back in the game today because I didn’t think he had much steam on throwing the ball.

“He’s had these before and in a few days he starts to respond pretty well. We’ll just have to see how it goes and play it day-to-day.”

Pittman said he wishes the best for Young.

“I hope that he’s fine,” Pittman said of Young. “He’s a really good player and competitor.”

Arkansas junior linebacker Drew Sanders, a transfer from Alabama, sacked his old quarterback — Bryce Young — for a 4-yard loss in the second quarter.

Sanders increased his sack total to 6.5, which leads the nation.

It was the fifth time Young had been sacked this season.

Jackson caught a pass in the end zone for a 6-yard touchdown with 21 seconds left to pull the Razorbacks within 28-7 of Alabama.

Jefferson and Jackson connected on a 32-yard touchdown for Arkansas’ first score with 9:44 left in the first quarter in Texas A&M’s 23-21 victory over the Razorbacks last week.

The Tide had a first and 10 at the Razorbacks 19 when McGlothern made a one-handed grab of a pass by Bryce Young at the 1.

It was the third interception this season for McGlothern, a transfer from LSU. He also had interceptions against Cincinnati and South Carolina.

McGlothern had one interception in two seasons at LSU, against Florida last year, which he returned 37 yards for a touchdown.

Arkansas senior receiver Warren Thompson dressed out but didn’t play because of an undisclosed injury.

“We thought there was a chance that he could play,” Coach Sam Pittman said. “But he just didn’t practice well at all this week, so we felt like we’d be better with Ketron [Jackson] in there, and Jaedon [Wilson], a chance with him out there, because [Thompson] wasn’t ready.”

Junior Myles Slusher started at nickel back for Arkansas, but left the game in the second quarter and didn’t return.

“His calf was all tight,” Pittman said.

When Alabama stopped KJ Jefferson short of the goal line after Raheim Sanders’ 3-yard touchdown run, it dropped the Razorbacks to 1 of 8 on two-point conversions since 2019, according to a CBS Sports graphic.

Saban improved to 19-2 against the Razorbacks with Saturday’s victory, including 16-0 since going to Alabama. He was 3-2 against Arkansas as LSU’s coach from 2000-04.

Saban’s last loss to Arkansas was in 2002 when the Razorbacks beat LSU 21-20 at War Memorial Stadium in Little Rock on Matt Jones’ 31-yard touchdown pass to DeCori Birmingham with nine seconds left and an extra point kicked by David Carlton.

Carlton’s kick ended up being 35 yards after Arkansas was penalized for excessive celebration.

The game became known as “The Miracle on Markham” because of the street that runs adjacent to War Memorial Stadium.

Arkansas junior Jake Bates executed a successful onside kickoff in the third quarter when he hit the ball up the middle and then recovered the ball himself after getting a clearing hit by linebacker Chris Paul that knocked an Alabama player out of the way.

It was the second onside kickoff that went the Razorbacks’ way.

Arkansas linebacker Bumper Pool recovered an onside kick by South Carolina and returned it 34 yards to the Gamecocks 9 to set up a touchdown in the Razorbacks’ 44-30 victory.

Arkansas got a field goal from Cam Little after Bates’ recovery to cut Alabama’s lead to 28-17.

The Razorbacks struggled to tackle Gibbs for most of the game as he rushed 18 times for 206 yards and 2 touchdowns.

Domineck and Gibbs both transferred from Georgia Tech after last season.

The announced crowd for Saturday’s game was 75,579.

It was the fifth largest ever home crowd for the Razorbacks.

For the Razorbacks’ second defensive series they had a fresh four-man line with ends Eric Gregory and Jordan Domineck and tackles Terry Hampton and Cam Ball.

The Razorbacks switched between three- and four-man lines the rest of the game.

Sophomore receiver Ketron Jackson made his first career start for the Razorbacks.

Arkansas senior linebacker Bumper Pool had 10 tackles to give him 395 for his career. He remains in second place on the Razorbacks’ all-time list behind Tony Bua, who had 408 tackles from 2000-03.

Alabama junior center Seth McLaughlin made his first start of the season in place of injured senior Darrian Dalcourt.

McLaughlin played in three of the Tide’s first four games this season — he didn’t get on the field at Texas — and started the final three games last season.

Quinton Caver, an All-SEC linebacker for the Razorbacks as a senior in 2000, served as Arkansas’ honorary captain.

Caver, from Anniston, Ala., played in 44 games for the Razorbacks and had 239 tackles, including 30 for lost yards. He was a second-round pick by the Philadelphia Eagles in the 2001 draft and played five seasons in the NFL.

Arkansas’ loss to Alabama and quarterback Bryce Young dropped the Razorbacks to 0-6 against teams with the reigning Heisman Trophy winner.

Arkansas’ students made clear their feelings about Alabama Coach Nick Saban when he did a television interview on the field about two hours before kickoff.

The student section already was filled and they booed loudly during the interview and chanted, “Saban sucks!”

Alabama improved to 73-18 against ranked teams since 2008, including 5-0 in matchups with Arkansas.

The Razorbacks are the first ranked team Alabama will play this season, but the first of three consecutive opponents in the AP poll along with No. 17 Texas A&M and No. 8 Tennessee.

Eric Musselman, Arkansas’ men’s basketball coach, and freshman players Barry Dunning and Derrian Ford handed out pizzas Friday to the students waiting in line to be the first into the stadium on Saturday.