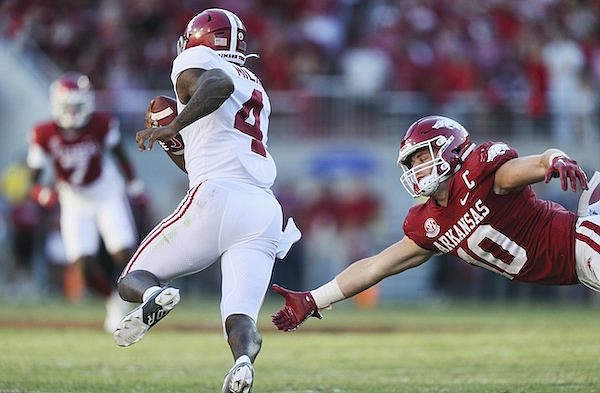 The University of Arkansas discovered that the hard way after fighting back from a four-touchdown deficit to pull within five points of defending SEC champion Alabama to start the fourth quarter on Saturday.

The No. 2 Crimson Tide kept its composure behind back-up quarterback Jalen Milroe, in for injured Heisman Trophy winner Bryce Young, and reeled off three runs of 70-plus yards to pull away from the No. 20 Razorbacks 49-26.

A crowd of 75,579 at Reynolds Razorback Stadium, the fifth-largest in stadium history, got loud and rowdy as Arkansas scored 16 unanswered points in the third quarter to get within 28-23.

Milroe provided a temporary silencer, a 77-yard scamper on third and 15 to set up a short touchdown. Then Jahmyr Gibbs had touchdown runs of 72 and 77 yards in a span of three offensive snaps for Alabama, which piled up 555 total yards, 317 on the ground.

“Too many, way too many big plays for them,” Arkansas Coach Sam Pittman said. “Not enough for us. … We have to play better. We’ve got to regroup. Last year we lost three in a row and turned out to win … five of the last six.”

Alabama opened 5-0 for the 13th time in 16 seasons under Coach Nick Saban.

Both starting quarterbacks, Young and Arkansas junior KJ Jefferson, were dinged up.

Young came out one series after landing awkwardly on his right shoulder while being sacked by Drew Sanders in the second quarter. The junior slammed his helmet to the grass while going into the medical tent and did not return. Young was off to a hot start with 173 passing yards and a touchdown and also an 8-yard touchdown run as the Crimson Tide jumped on top 14-0.

Saban said after the game that he believed Young had strained a shoulder muscle.

Jefferson came out during the fourth quarter, shortly after 348-pound Jaheim Oatis slammed him to the grass on a 7-yard sack midway through the period.

“He hit his head,” Pittman said. “I don’t know where he’s at to be honest with you. Obviously we didn’t bring him back in. I don’t know any more than that.”

Jefferson completed 13 of 24 passes for 155 yards and a touchdown and took 3 sacks and several other shots.

Saban said his team lost focus after going ahead 28-0.

“Obviously this is a really good win for our team,” he said. “I thought one of the messages that we tried to give the team was that you have to maintain your intensity in the game for all 60 minutes, regardless of what the score is and regardless of what happens.

“Even though it was a great win, we did a lot of great things out there and made a lot of great plays, I don’t think we maintained our intensity. We let them get back into the game at one point, [had] a couple errors in the kicking game as well.”

Arkansas amassed 377 total yards, 102 below its season average, with 187 on the ground and 190 through the air. Raheim Sanders, who led the SEC and ranked fourth nationally in rushing entering the game, ran for 101 yards and a touchdown for his fourth 100-yard game of the season.

Gibbs wound up with 206 rushing yards on 18 carries, averaging 11.4 yards per carry.

“We have guys to lean on,” Gibbs said of Alabama maintaining its explosiveness without Young. “We’ve got playmakers everywhere, so anybody can score at any given time.”

Gibbs was at 3.9 yards per carry before cracking the big scoring runs.

“He’s a really good back,” Arkansas linebacker Bumper Pool said. “I thought we did a good of bottling him up for most of the game. Then Alabama, they’ll break a run on you and they can take it to the house.”

The Crimson Tide built a 28-0 lead by crushing the Razorbacks on third downs, many of them third and long. Alabama was 6 of 8 on third-down conversions in the first half.

Dwight McGlothern intercepted a tipped Young pass at the Arkansas 1-yard line to end a 56-yard march on the Tide’s first possession. While Arkansas struggled to establish its passing game early, the Tide heated up, scoring on their next two possessions.

Young connected with Kobe Prentice on a third-and-3 slant pass, and the speedy Prentice raced 47 yards for the first score. Facing a third and 6 on the next possession, Young got good protection and connected deep with Isaiah Bond for 56 yards. Young ran in untouched from the 8 on the next snap.

Arkansas drove into Alabama territory with its fourth series, but safety DeMarcco Hellams poked the ball away from Rashod Dubinion after an 11-yard gain to snuff the drive.

Milroe inherited a prime situation, leading 14-0 with the ball at the Arkansas 17 after Kool-Aid McKinstry’s 45-yard punt return.

Milroe scored on a 3-yard keeper over the left side to make it 21-0.

“When you’re playing a good team, a great team like Alabama, it’s like when you mess up they’re going to do something the next drive,” Raheim Sanders said. “I feel like with us having some messing up, we did, and I feel like they came back and they attacked it.”

Added Arkansas offensive tackle Dalton Wagner, “They capitalized on the mistakes that you made. Well-coached teams will do that.

“We capitalized on their mistakes. We’re a good team. We’re a very well-coached team. Capitalized on the mistakes they made, but we made far too many more. A team like that will take advantage of every single thing that you do wrong.”

Next, Milroe drove the Crimson Tide 59 yards for a score with a series of short passes that his receivers turned into big gains. The last of those came after the Tide had a holding call and then offensive pass interference to set up third and 18 from the Arkansas 22.

Milroe threw a 1-yard screen to JoJo Earle, who got good blocks, made a spin move and darted into the end zone for a 22-yard score and a 28-0 lead.

The Razorbacks finally put together a much-needed scoring sequence in the two-minute drill. Sanders started it with a 12-yard run and added a 26-yard tackle breaker over the right side to get to the Alabama 9. Landers also had a 20-yard catch.

Ketron Jackson capped the drive with a sliding 5-yard touchdown catch with 21 seconds left before intermission.

AJ Green capped a 78-yard drive on the Hogs’ second possession of the quarter with a 13-yard burst over the left side to make it 28-14.

Then Arkansas got crafty, with kickoff man Jake Bates pulling off a perfect onside kick, which he recovered after it rolled 11 yards. The Razorbacks turned that into a 22-yard field goal from Cam Little to make it 28-17.

Moments later, after a three and out from their own 20, Crimson Tide deep snapper Kneeland Hibbett badly misfired on his delivery to punter James Burnip, who recovered the bouncing ball at the Alabama 3.

Sanders bulled in from that distance on the next play to cap the big third quarter and draw the Hogs within 28-23. The Tide stopped Jefferson’s two-point conversion run, then regained control of the game.