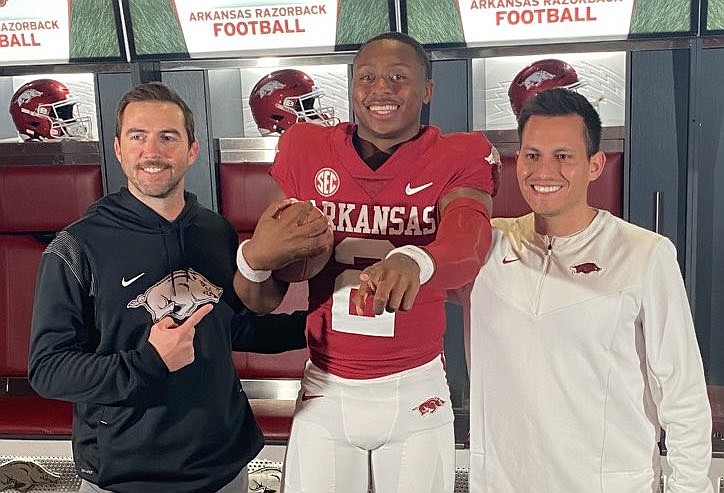 Arkansas hosted about 90 prospects for the Alabama game, and while the Razorbacks suffered a loss, the prospects came away impressed.

Running back Kewan Lacy made the trip and left impressed and with an offer from the Razorbacks.

Lacy, 6-0 and 190 pounds of Lancaster, Texas, had offers from Alabama, Ohio State, Oregon, Tennessee, Miami, Michigan State and other schools prior to his visit.

“I loved the fan base and the atmosphere," he said. "I’m still building a relationship with the coaches, but they seem very sincere and can’t wait to come back for another visit."

“Some things that really stood out to me today was that the hospitality was great, and the atmosphere was electric,” said Mikhail, whose cousin Kylie Harris is a senior at the UA. “I had a lot of fun watching the linebackers play as well.”

Mikhail, 6-3 and 205 of Bonita High School in La Verne, Calif., has offers from Arkansas, Oklahoma, Southern Cal, Oregon, Texas A&M, Washington, Colorado, Arizona, California and others. He's rated a 4-star prospect in the 2025 class by On3.com.

Junior defensive end Danny Okoye, 6-5 and 225 of Tulsa, has offers from Arkansas, Southern Cal, Tennessee, Oklahoma State, Missouri, Baylor and other schools. He is homeschooled.

“The tour after the game, the energy of the fans, the vibe of the coaching staff,” Okoye said of what stood out about the visit. “Everything was awesome.”

Bryant junior defensive lineman TJ Lindsey made his fifth trip to visit the Hogs on Saturday. He also visited for the season opener against Cincinnati.

“Talking to Coach Pittman and Deke Adams always are two highlights of my Arkansas visits. I received a lot of love from all coaches and staff, had a tour of campus on game day and I took a photoshoot,” Lindsey said. “Loved my time on the Hill.”

The class of 2024's top dual-threat quarterback, DJ Lagway, made his third trip to Fayetteville on Saturday.

“The atmosphere was amazing, and it was great to see the coaches,” he said.

ESPN rates him a 4-star recruit, the No. 1 dual-threat quarterback and No. 21 overall prospect in the junior class.