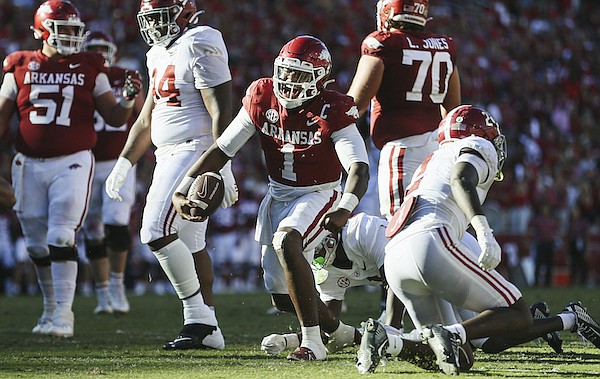 FAYETTEVILLE — Arkansas quarterback KJ Jefferson’s availability is up in the air for Saturday’s game at No. 23 Mississippi State in his return to his home state.

UA officials had no update on Sunday on the status of Jefferson, who left Saturday’s game in the fourth quarter after Coach Sam Pittman said he hit his head. A UA spokesman could not confirm on Sunday whether Jefferson was in concussion protocols.

Jefferson hit his helmet on the grass on a hard sack by 348-pound Jaheim Oatis late in the Razorbacks’ 49-26 loss to Alabama. He came out for one play, returned to throw an incomplete pass, then did not go back in for the final 6:55 after Alabama seized control by 23 points.

Pittman was vague on Jefferson’s status.

“I don’t know where he’s at to be honest with you,” Pittman said. “Obviously we didn’t bring him back in. I don’t know any more than that.”

Jefferson started all 13 games last year, playing through various bumps and bruises as is usual for a dual-threat quarterback, and all five games this season.

The Razorbacks (3-2, 1-2 SEC) turned to Cade Fortin as his backup on Saturday. The senior transfer from South Florida completed 4 of 10 passes for 35 yards and had 1 carry for 9 yards.

Fortin engineered a nine-play, 46-yard sequence on the Razorbacks’ final possession of the game. The series fizzled when Jadon Haselwood was tackled two yards short of the line to gain at the Alabama 9-yard line on a 4th-and-5 pass. Jefferson was sitting on the bench during that drive.

Jefferson, a 6-3, 242-pounder, had a massive showing before a large crowd of friends and family from nearby Sardis, Miss., in Arkansas’ 52-51 loss at Ole Miss last year. Jefferson passed for 326 yards and 3 touchdowns and rushed for 85 yards and 3 more scores against the Rebels in his first collegiate start in Mississippi.

For the third consecutive year, the Razorbacks will face Mississippi State on the week the Bulldogs joined the national rankings.

Arkansas fell from 20th out of The Associated Press Top 25 poll on Sunday after a 49-26 loss to Alabama, while the Bulldogs joined the poll at No. 23 following a 42-24 home win against Texas A&M.

Arkansas is 2-0 against the ranked Bulldogs that last two years. In 2020, after the Bulldogs surged to No. 16 following a 44-34 season-opening upset of defending CFP champion LSU, the Razorbacks notched a 21-14 win in Starkville, Miss., to end their 20-game losing streak in SEC play.

Last year, the Bulldogs were No. 17 in the College Football Playoff rankings the week Arkansas downed them 31-28 at Reynolds Razorback Stadium on Nov. 6.

Arkansas remained in the USA Today Coaches poll on Sunday at No. 25, the second-highest ranked two-loss team in the country behind No. 22 Baylor. Mississippi State is also No. 23 in the coaches poll.

The Bulldogs are an early 5 1/2-point favorite in the matchup set for Saturday at 11 a.m. Central at Davis Wade Stadium in Starkville, Miss.

The Alabama defense made passing the ball tough on Arkansas, as KJ Jefferson threw for a season-low 155 yards on 13 of 24 passing.

“I wanted to run some go balls, and we tried that a little bit,” Pittman said. “We tried it later. We always try to establish the run to throw play-action off of it, but we just … we either weren’t getting open or we weren’t throwing it accurately. We came off the field. We couldn’t stay on the field.”

The announced crowd of 75,579 for Saturday’s “Red Out” game was the fifth-largest in Arkansas football history.

The Razorbacks have drawn two of their top eight-attended games this season, with a crowd of 74,751 for the season opener against Cincinnati ranking eighth.

Arkansas also drew a pair of crowds that ranked in the top eight during the 2006 and the 2016 seasons.

Arkansas kicker Jake Bates stroked a perfect bouncing onside kick and had the presence of mind to make sure the ball traveled 10 yards before falling on it himself with 7:42 left in the third quarter.

The recovered kick came just after the Razorbacks had pulled within 28-14 on AJ Green’s 13-yard touchdown run.

Linebackers Chris “Pooh” Paul and Jordan Crook both did their jobs as inside “blockers” on the play, wiping out Alabama’s Kristian and Deontae Lawson, the two nearest defenders, who had retreated just a few steps on the kick and could not recover in time. Paul and Crook had to wait until the ball went 10 yards to make contact and they both did, by a hair, before smashing into the two Alabama players.

“Seeing it on tape, we felt like it was there,” Coach Sam Pittman said. “Bates was really good at it. He had done it at his previous school. It just seemed like the right time to use it. It worked, and we went down and scored, so that was a good deal.”

The Crimson Tide led the Razorbacks in rushing, passing, penalties and dropped passes on Saturday.

Alabama receivers and backs had at least four dropped passes on the day, including ones by Ja’Corey Brooks and Traeshon Holden while Bryce Young was still in the game during the first half.

The Razorbacks appeared to have one drop, by Jaedon Wilson on a third-and-8 second quarter that would have moved the chains at the Arkansas 20. The resulting Arkansas punt led to Kool-Aid McKinstry’s 45-yard punt return and a short Alabama touchdown drive for a 21-0 lead.

The SEC Network crew will be on hand in Starkville, Miss., on Saturday morning to broadcast the weekly SEC Nation pre-game show.

The show will originate from The Junction on the Mississippi State campus from 9 a.m. to 11 a.m., preceded by Marty & McGee from 8 a.m. to 9 a.m., also on site.

This will mark the third Arkansas game with the weekly traveling show on site this year, following the season opener against Cincinnati and the Week 4 game against Texas A&M in Arlington, Texas.

The odds for Alabama quarterback Bryce Young to win the Heisman Trophy for a second straight year doubled on Sunday from 5 to 1 up to 10 to 1 per sportsbetting.ag following his AC shoulder sprain injury against Arkansas.

Additionally, Young’s injury lowered Alabama to the third-favorite to win the College Football Playoff championship at 3 to 1, below co-favorites Georgia and Ohio State, who are both listed with 2-to-1 odds.

The sophomore from Rockledge, Fla., ran 22 times for 101 yards and a touchdown, averaging 4.6 yards per carry. Sanders notched his fourth 100-yard game of the season.

The junior from Denton, Texas, played well versus his former team, racking up a game-high 12 tackles, 6 solo and 6 assists. He also posted a hurry and a sack, giving him 6.5 on the year.