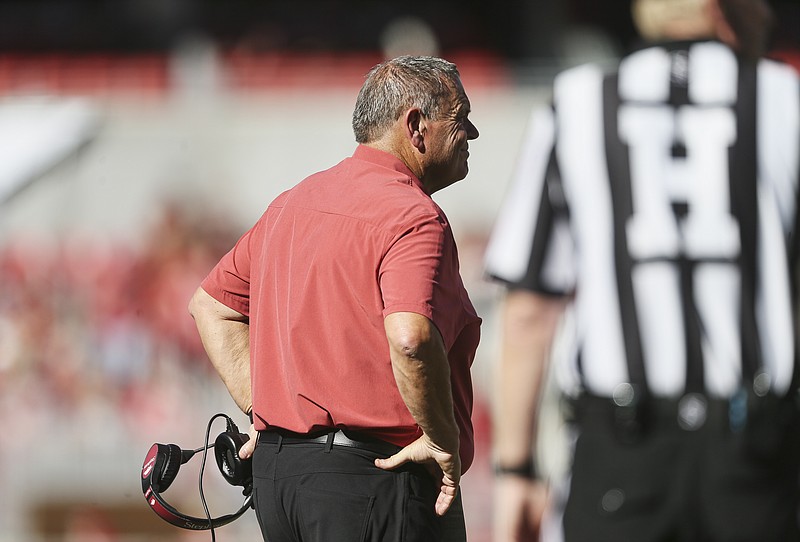 FAYETTEVILLE — Arkansas coach Sam Pittman spoke to reporters for roughly a half hour Monday afternoon previewing this weekend's game against No. 23 Mississippi State.

Here are the highlights from his press conference:

• We’re very excited to go to Starkville, Miss. They’ve got a really good special teams unit. Will Rogers is a problem and a really good quarterback. They have a lot of talented receivers, too. Five of them have around 20 catches or more.

On defense, they blitz a lot and they play hard. There’s a reason they’re ranked in the top 25 this week and 4-1 this season.

• We’ve got to get some people back. It seems like we’ve had guys beat up all year. Man coverage has been a problem for us. We have to be in better position. Explosive plays, we have to limit them and keep guys in front of us. Our tackling and secondary woes have to improve.

• On KJ Jefferson's status: He has some "mild symptoms" after hitting his head Saturday in the fourth quarter. Each kid is different as to how they react. He’s in a wait-and-see situation right now.

Pittman later added that players need to show by Wednesday that they can do various things in practice in order to play.

• Recalling the win at Mississippi State in 2020: I remember finding out we hadn’t won a league game in a long time after the game. Hardly anyone was there because of covid-19. The locker room was exciting. We played a good game, especially on defense. It was certainly a good feeling and my first game ball and all that. It was exciting.

• Defensive coverage this week: We won nine games last year with the double-cloud coverage. But we got exposed by some teams doing it, too. We’ll look at it again this week. I’m sure Mississippi State will be ready for that this year if that’s the route we take. We have to be multiple and keep people in front and get people on the ground. Zone coverage at times can certainly help with that.

• On quarterback Cade Fortin last Saturday and moving forward: We’re very confident with him in practice. He’s done well in two-minute situations. We also believe in Malik Hornsby. We still think we have two good quarterbacks if KJ can’t play. Cade can run a bit, as well. Both guys – Cade and Malik – can throw it and run it.

• On the Bulldogs' win against Texas A&M: They’re going to cause you problems on offense with all the movement they do. I like their linebackers a lot, and they use them really well. They have made a difference in a lot of games just on special teams. They’re hot right now.

• On Rogers: He can expose you. We’re going to have to make decisions on pressure on third down. We’ve got to get there. They are good at the tackle spots on the offensive line. We’ve got to move him — hurry him, at least — this weekend.

• Hornsby right now is a quarterback and receiver. The move to receiver hasn’t been even what I thought it would be. The plan is for him to play quarterback.

• On receiver Ketron Jackson: He is one of the most improved guys on the team. He’s always been a good player, but he’s coming into his own. He’s been a good blocker and an effort guy. He’s playing with confidence now. He was starting in fall camp then Matt Landers beat him out, but now he’s playing better ball than what I thought he would.

• I hope Jackson keeps getting better and better. The passing game and how much you go to it dictates how you’re running the ball, but also who you’re playing. I think he’s going to be a big part of the passing game. We’re running it well, but we’ve got to open it up a little bit more.

• Whenever you can go on the road and play in the morning, 11 a.m. would be the No. 1 time I’d like to play. Any later than that, the tailgates get better and the people get louder. People I’ve talked to say it is louder than loud during pregame.

• On the Bulldogs defensively: They’re going to come at you, so you better win first down. This is one of the defenses that has moved the most and blitzed the most that I’ve seen. You’ve got to make some big plays on them. I think offensive line coach Cody Kennedy and his group have handled movement well up front. We’re going to practice it. There is no fear in the Bulldogs’ defensive coordinator.

• On receiver Warren Thompson and defensive back Myles Slusher: I think Slusher is a little worse off than Thompson right now. We’ll see what Thompson can do today. It's more of a wait-and-see deal with Slusher. His calf “is jacked up a little bit,” Pittman said of Slusher.

• Defensive end Jashaud Stewart hasn’t been healthy. We’ll run him through some individual drills today and see how he handles it.

• Hornsby is handling things fine. I visited with him today, and he’s handling it fine. There’s some things, like the situation, that go into who we put out there as the backup. Fortin, I would say, is a thrower, and we were trailing in the game. Some of it is about situation.

• It’s probably the plan to pump in some cowbell noise during team segments in practices this week.

• We sent in some plays to the league office from the Alabama game. Pittman said Arkansas usually sends in from 3-7 plays per week, and they will send back a voiceover with an explanation of what happened or why something was or wasn’t called.