Alabama game was Hogs' most watched since 2015 season 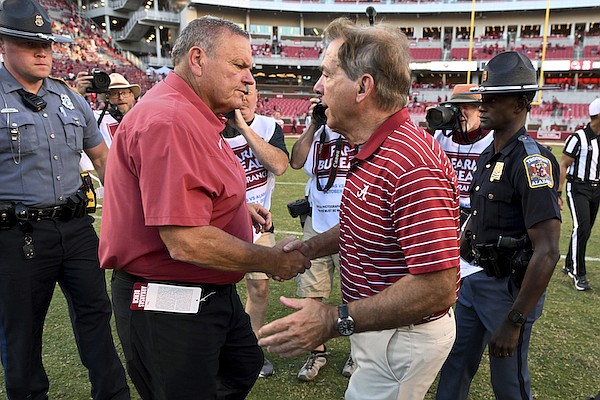 CBS averaged 5.83 million viewers and had a peak of nearly 7 million for the game, which saw the Crimson Tide pull away for a 49-26 victory after Arkansas cut the lead to 28-23 at the end of the third quarter.

The game had a 3.2 rating, meaning an estimated 3.2% of TV households were tuned in.

Arkansas had not had a TV audience that large since a 45-23 victory over Kansas State at the Liberty Bowl to close the 2015 season. ESPN averaged 7 million viewers for that game, according to archived TV figures at SportsMediaWatch.com.

For Alabama, it was the second-largest audience for a game this season, trailing the 10.6 million average on FOX for the Crimson Tide’s 20-19 victory at Texas on Sept. 10.

CBS averaged 5.5 million viewers and had a peak audience of nearly 7.4 million for the 2021 game between Arkansas and Alabama, which the Crimson Tide won 42-35 at home.