Rally and hit: Hogs understand the plan vs. Bulldogs 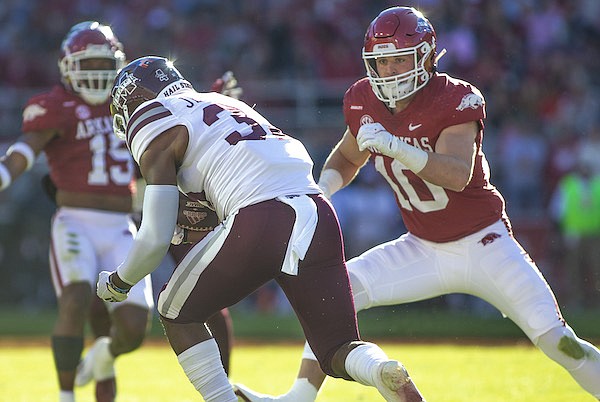 FAYETTEVILLE — For the third consecutive season, Arkansas will face Mississippi State the week after the Bulldogs notched a noteworthy victory.

In 2020, Mississippi State debuted head coach Mike Leach’s Air Raid offense with great success during a 44-34 win at LSU in which the Bulldogs threw for 623 yards. Last season, Mississippi State handed Kentucky a 31-17 loss on the backs of a three-touchdown game on the ground.

In each of Sam Pittman’s first two years at Arkansas, the Razorbacks have ended Mississippi State’s fun at least for a week, celebrating the end of a long SEC losing streak and bowl eligibility, respectively.

Arkansas essentially created the blueprint for success against the Bulldogs during the covid-19 season of 2020, so the Razorbacks have a firm understanding of the game plan for Saturday’s 11 a.m. kickoff.

“We’re prepping for them, watching film, but making sure we make them make catches in front of us and not behind us,” starting safety and captain Simeon Blair said Tuesday. “We’re making sure that we can get them in spaces where we can vice tackle them, making sure that we don’t let nobody get behind us and keep our eyes on everybody on the field.

“We’re really just trying to make them catch the ball in front of us and rally to the ball and run and hit like we used to do.”

Mississippi State threw for a combined 730 yards in the teams’ last two meetings, but the Bulldogs have experienced mixed results with 5 touchdown passes and 4 interceptions. However, Will Rogers, Leach’s starting quarterback, accounted for four of those passing scores and just one giveaway last season in Fayetteville.

Rogers is a dangerous quarterback in Pittman’s mind. He figures Arkansas will get Rogers' best shot given last year’s 31-28 outcome in Fayetteville, and the fact Rogers is in his third year in Leach’s system.

The Razorbacks could shake things up in the secondary this weekend. In Tuesday's practice, cornerback Hudson Clark received reps at safety in the team's Fastball Start period, and freshman receiver Sam Mbake worked out as a second-team corner.

“The thing is you really have to disguise in the secondary, because if you don’t, he knows exactly what you’re doing, whether you’re in man or it’s quarters or double cloud or whatever it may be,” Pittman said. “He can exploit you.

“There will have to be a decision made, obviously, on third down and things of that nature, whether we’re going to go after him or not. We can’t just let him sit back there. I mean, he’s really good, and they’ve got receivers that can (make plays), as well.”

According to Pro Football Focus, Rogers’ offensive line has provided a clean pocket on 82% of his 248 drop backs this season, and he has completed 77% of those throws for 19 touchdowns and 2 interceptions. His go-to pass attempt is 1 to 9 yards downfield and over the middle of the field.

And he spreads the ball around to a number of capable pass catchers. The Bulldogs will enter the weekend with 8 players who have caught 10-plus passes, and 5 with 19 or more.

Pittman said Monday that Mississippi State has been effective in 1-on-1 situations. Sophomore receiver Rara Thomas leads the team with 359 yards and a 17.9-yard-per-catch average.

“They run the same exact offense that Leach has done for 20 years or 20-plus years, and they stick to it,” linebacker Bumper Pool said, “so for us it’s just being able to recognize the routes based off of the formation. They stick to it, so if we can read what they’re doing pre-snap, we’ll have a lot of success.

“We’ve just got to make sure we’re staying in our zones, not dropping too deep and make sure that we’re doing a good job getting our hands on them.”

According to PFF, the Razorbacks posted a coverage grade of 85.1 at Mississippi State in 2020, and a season-best tackling grade of 79.6 vs. the Bulldogs last season. To snap a two-game losing streak in league play, Arkansas may need a mix of those two performances this weekend.

Pool in 2020 finished with 20 tackles at Mississippi State, then added 10 last year. Because of the Bulldogs’ high volume of short throws, he will again be tested and counted on to make plenty of plays in space.

“We just have to be us,” Pool said. “I think that we’ve had a game plan that’s worked, so if we just continue to follow the plan that (defensive coordinator) Coach (Barry) Odom puts in front of us and we lock in on our keys for four quarters, we’ll have success.

“We have it in the back of our mind to get that swagger back this week.”