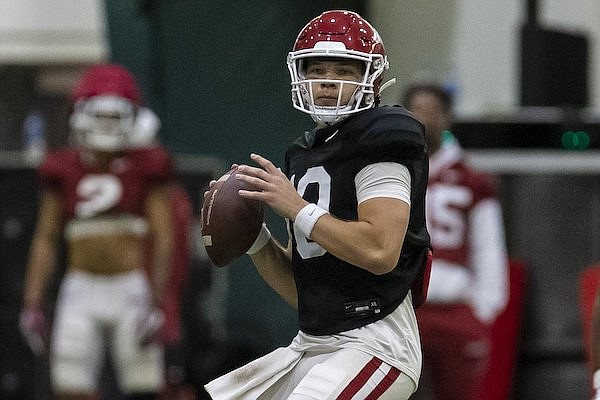 FAYETTEVILLE — University of Arkansas quarterback KJ Jefferson was at practice on Tuesday, though he did not participate in the team’s fastball starts during the media viewing portion of the workout on the outdoor practice fields.

Senior Cade Fortin and sophomore Malik Hornsby quarterbacked the first and second teams, respectively, during that portion of the full-pad practice on a warm afternoon with temperatures in the mid-80s.

Hornsby provided a little insight into the Razorbacks’ quarterback situation during a morning appearance on KABZ-FM in Little Rock.

Former Razorback linebacker David Bazzel asked Hornsby how the reps were going between he and Fortin, who played the final 12 offensive snaps in Saturday’s 49-26 loss to then-No. 2 Alabama after Jefferson’s helmet hit the ground on a sack.

“We’re trading reps right now like both of us will be the starter,” said Hornsby, who has a Name, Image, Likeness deal with the station. “We really won’t know until a couple of days. It’s like we’re both playing right now as the starter at practice and there’s just really good competition going on.

“As far as KJ, I really don’t know what’s going to happen in that area. I’ve got to wait to see like everybody else.”

Jefferson was referenced as a “wait and see” for the game by Coach Sam Pittman on Monday as he goes through the process to determine his readiness for a return to action. Pittman does not conduct media interviews on Tuesday.

Hornsby told Bazzel that he was still doing a little of both quarterback and receiver but he was mainly a quarterback this week.

“Him we already know about, and whoever’s behind him, we’ll see what they can do for sure,” Leach said. “I don’t know that he’s out. An awful lot of times it looks like somebody’s out, and he comes in there, and there isn’t anything wrong with him.

“We’ll see, but I don’t think they’re going to change their whole offense, and it’d be difficult to do in a week no matter who you’re playing. It’ll be pretty similar to what they do already, because they can’t just reteach anything.”

Working with the top offense, Cade Fortin completed 1 of 2 passes during the three-play fastball starts. After a Raheim Sanders run, Fortin threw incomplete to Matt Landers on the left edge, then completed a pass to Sanders on the same edge.

Malik Hornsby also went 1 for 2 with the second group. He handed off to AJ Green on a run-pas option play to open the segment. Green appeared to drop a low swing pass from Hornsby on the next play, then Hornsby found the running back over the short middle on the final play.

The Arkansas coaching staff is trying to bolster its numbers in the secondary with some personnel moves. During Tuesday’s fastball starts, Hudson Clark was working as a safety along with Simeon Blair and Khari Johnson, with Jayden Johnson at the nickel spot. Clark normally rotates at one cornerback position with Malik Chavis opposite Dwight McGlothern. Chavis and McGlothern, who notched his third interception last week, were the top cornerbacks.

A couple of weeks ago, Coach Sam Pittman said Clark was flexible enough to play the nickel or one of the safety spots.

Additionally, freshman receiver Sam Mbake moved to second-team cornerback, paired with Keaun Parker on that unit. The rest of the defensive backs were Trent Gordon at the nickel, and Jaylen Lewis, Jacorrei Turner and Zach Zimos at safety.

“Sam’s a very great athlete,” safety Simeon Blair said. “He goes on 110% each and every day, whether that’s at gunner, whether we’ll send him to receiver on scout team, and now seeing him at DB. He does a lot of good for us. He picks up on the defense very quick.”

The outdoor practice fields crackled with ringing cowbell sounds during team periods on Tuesday as the Razorbacks prepare to face the noise makers on Saturday.

“We have like a noise speakers that have the cowbells on there,” center Ricky Stromberg said. “We heard it yesterday, we heard it today, we’re going to hear it Wednesday and Thursday. We’re definitely going to be prepared going into Starkville with those cowbells.”

Safety Simeon Blair shook his head as Stromberg spoke, then added, “Man, I thought we were only going to have the cowbells going for the offense, but the defense, we hear them every single second of the day.

Arkansas had one sack against Alabama last week, dropping the Razorbacks to second in the nation behind Cincinnati.

Arkansas now has 21 sacks to the Bearcats’ 23. Temple and Bowling Green are just behind Arkansas with 20 sacks.

Mississippi State Coach Mike Leach was asked Monday if there was a stronger emphasis on pass protection this week with Arkansas coming to town.

Six teams in the latest Associated Press Top 25 poll make up half of Arkansas’ schedule.

The Razorbacks are 1-1 against those teams, beating Cincinnati 31-24 to open the season and losing to Alabama 49-26 last Saturday.

Cincinnati was ranked No. 23 in the preseason poll, but dropped out after losing to the Razorbacks. The Bearcats have returned to the rankings at No. 24 after winning four in a row.

Alabama moved from No. 2 to No. 1 and replaced Georgia atop the poll after beating Arkansas.

Arkansas fell to No. 20 after losing to Texas A&M and is unranked this week.

Mississippi State led the country in yards after catch in 2021 and the Bulldogs are in the running to do it again this season.

Alabama tailback Jahmyr Gibbs was clocked at 22.3 miles per hour on the first of his breakaway touchdown runs in the fourth quarter at Arkansas last week, according to Recruiting Analytics.

The Crimson Tide back broke through the first level and into the secondary without a defender in his vicinity and was able to hit maximum speed quickly en route to a 72-yard touchdown early in the fourth quarter. Linebacker Drew Sanders and back-side corner Dwight McGlothern gave chase, but neither could get in tackling range.