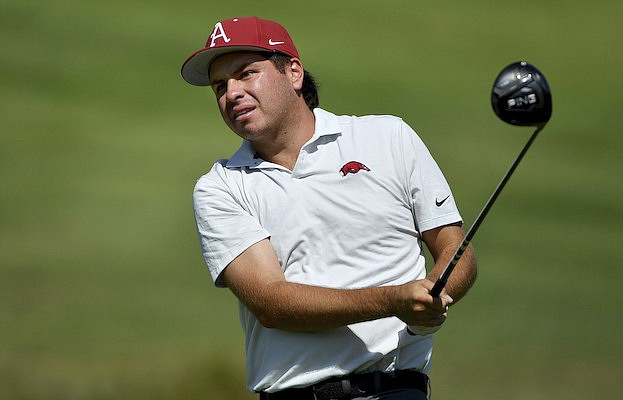 JOHNSON — Texas A&M finished Monday’s first round of the men’s portion of the Blessings Collegiate Invitational eight strokes behind the leader, the University of Arkansas, and six shots behind second place Kansas.

When the second round was over Tuesday, the Aggies had jumped over both teams into first place after a staggering 15-under 273 at the Blessings Golf Club. Arkansas, which shot a 5-over 293, is in second place at 1-over 577, 12 shots behind the Aggies, who are at 11-under 565 heading into today’s final round.

The Razorbacks and Aggies each have four players inside the top 10, but Tuesday’s round of the day belonged to Texas A&M’s Daniel Rodrigues, who shot a 6-under 66 and leads the tournament by a stroke at 9 under over Gunnar Broin of Kansas.

Rodrigues’ teammates Phichaksn Maichon and Sam Bennett are tied for sixth at 1 under, while William Paysse is tied for ninth at 1 over. Maichon (6-under 67) moved up 28 spots on the leaderboard Tuesday, while Bennett’s 4-under 68 took him up 20 positions.

Arkansas’ Segundo Pinto is tied for fourth (3 under), while fellow Razorbacks Mathew Griggs, Julian Perico and Mateo Fernandez de Oliveira are part of the group at 1 over.

The Razorbacks will tee off at 11 a.m. on the first hole for today’s final round.

On the women’s side, Ole Miss and Mississippi State swapped first- and second-place positions after the second round, while Arkansas slipped from third to sixth after a 14-over 302 to fall to 25 over for the tournament.

The Rebels shot a 7-over 295 to move into the top spot at 15 over. The Bulldogs, who shot 1 under Monday, labored through an 18-over round of 306 to slip two shots behind Ole Miss.

Andrea Lignell of Ole Miss shot a 69 to open a two-shot lead over Mississippi State’s Julia Lopez Ramirez who led Lignell by six strokes after the opening round.

The Razorbacks will tee off at 8:45 a.m. from the 10th hole for today’s final round.

Both Arkansas teams are the tournament’s defending champions.