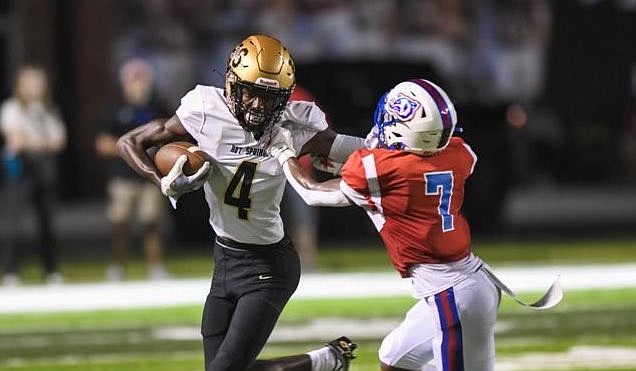 Hot Springs coach Darrell Burnett is high on junior receiver Octavious Rhodes, and believes he could become a Power 5 prospect.

Rhodes, 6-5, 175 pounds, got his feet wet playing football last year, and in his second season he tied a state record with five touchdowns receptions in a game.

He had state record tying five touchdown receptions in a 61-30 victory over Little Rock Southwest  on Sept. 16. He has 24 catches for 467 yards and 10 touchdowns in five games this season.

Rhodes joined the football team in the third game of the 2021 season and slowly worked his way up to varsity.

“He played a lot in the JV games and you could see the development,” Burnett said. “By the end of the year he started playing with varsity — a lot of varsity.”

Rhodes made strong gains in strength and speed during the offseason.

“A lot of people when it comes to tall receivers that are so smooth, you think he’s slow or he isn’t running that fast until you actually get up to him,” Burnett said. “He outruns our fastest guys, and you can’t coach 6-4 or 6-5 that can run or jump.”

He attended 7-on-7 tournaments, including one at Arkansas, where he jumped on the Razorbacks’ radar. Rhodes has been invited to a Memphis game.

Burnett compares Rhodes to Newport senior receiver Isiah Kendall, who committed to Jackson State over offers from Pittsburgh, Indiana, Kansas and other schools.

“I really think he has a chance to be Power 5, (player),” Burnett said. “He reminds you of the Newport receiver but younger and has more time to develop. I really believe he’s a Power 5 guy.”