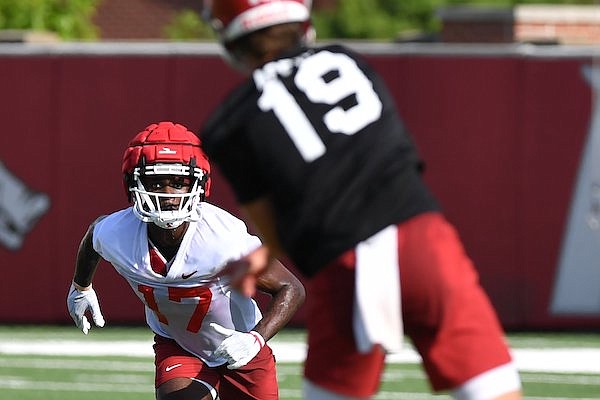 FAYETTEVILLE — Arkansas freshman Sam Mbake, who accepted a move to cornerback from receiver this week, has some background as a defensive back at North Cobb High in Kennesaw, Ga.

The 6-3, 202-pounder played in the secondary some as a sophomore before transitioning to full-time receiver, where he was rated the No. 48 player at that position in his class by 247Sports.

Coach Sam Pittman said Mbake, who has not been in the tight receiver rotation, has been impressive as a gunner on special teams. As Pittman and defensive coordinator Barry Odom scoured the roster for players who could help out in the dinged-up secondary, Mbake came to mind.

“I mentioned Sam because he had been physical on special teams and he’s got the range and the size and all that,” Pittman said. “I said, ‘Well, let’s ask him?’ And we did. Sam said, ‘Can I go back to receiver in the spring?’ And I said, ‘You certainly can.’

“That’s how it happened. We told him he’d be in the two-deep when he ran over and he was. So he’s that kind of kid. I think he’s going to be a good player for us, whether it’s over there or wideout eventually.”

“Well, our team is a little beat up,” Pittman said. “We’re trying to get healthy. Don’t know exactly the status on several of our kids yet, but we’ll be ready to play.”

The Razorbacks (3-2, 1-1 SEC) will try to extend their two-game winning streak over the Bulldogs (4-1, 1-1) with a depleted secondary and a question mark at quarterback.

KJ Jefferson has been dealing with symptoms from a helmet bang since Saturday’s 49-26 loss to Alabama that kept him out of practice early this week, so Cade Fortin and Malik Hornsby have split quarterback duties most of the week.

The secondary has been ravaged by season-ending injuries to preseason All-America safety Jalen Catalon and LaDarrius Bishop plus other ailments for Myles Slusher, Latavious Brini and others that have forced the Arkansas coaches to scramble for reinforcements in the beleaguered secondary.

Cornerback Hudson Clark has worked at safety some this week and receiver Sam Mbake is taking reps at cornerback in a move that might be temporary or longer lasting.

Pittman was asked if he’d seen one position group so beset by injuries in one season.

“To answer your question, no. I haven’t been around a position like that that is out for the year and taking that kind of length to get back.”

The Bulldogs broke the record twice last season, first overcoming a 20-point fourth quarter deficit in a 35-34 win over Louisiana Tech, then exceeding that with a comeback from a 25-point deficit in a 43-34 win at Auburn.

Leach’s Texas Tech club was behind 38-7 against Minnesota midway through the third quarter before closing the 31-point gap in a 44-41 win in overtime in the 2006 Insight Bowl, tying for the largest comeback in a bowl game in FBS history.

The Alabama-Arkansas game last week was the most-watched game for the Razorbacks in almost seven years.

The broadcast on CBS averaged 5.83 million viewers and had a peak of nearly 7 million, as the Crimson Tide pulled away late for a 49-26 win.

The most-watched college football game last weekend was also the highest-rated game for CBS this season.

Arkansas has not had a TV audience that large since a 45-23 win over Kansas State in the Liberty Bowl after the 2015 season averaged 7 million views on ESPN, according to SportsMediaWatch.com.

Alabama drew its second-largest audience of the year behind a 10.6 million average on FOX for the Crimson Tide’s 20-19 win at Texas on Sept. 10.

Redshirt freshman running back Javion Hunt, who had seen limited action in a deep backfield the last two years, has left the program.

The Razorbacks’ defensive rankings dropped after allowing 555 total yards to Alabama on Saturday.

Safety Khari Johnson made his first start of the season against Alabama and had two tackles and one pass breakup.

It was the second career start for Johnson and first in two years. He started at cornerback against Ole Miss in 2020.

Matt Jones of WholeHogSports.com contributed to this report