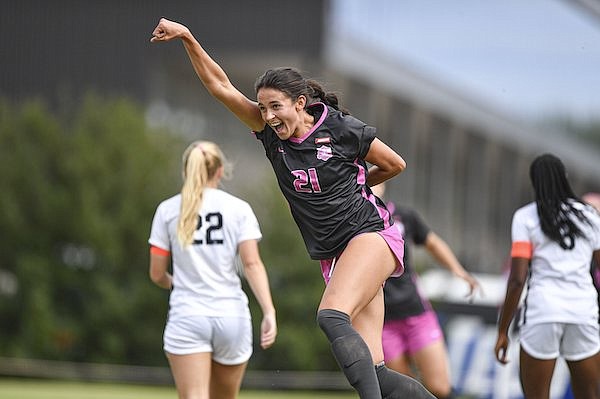 Arkansas forward Ava Tankersley celebrates a goal during a game against Vanderbilt on Sunday, Oct. 9, 2022, in Fayetteville.

FAYETTEVILLE — The Arkansas soccer team recorded its fifth consecutive shutout with a 3-0 victory over Vanderbilt on Sunday at Razorback Field.

The ninth-ranked Razorbacks scored twice within the first three minutes of the match. They had not scored more than one goal in a game since Sept. 11 at Grand Canyon.

Forward Anna Podojil got behind the Vanderbilt defense and placed the ball in the net for the opening goal after just 64 seconds. It was her 43rd career goal, one away from tying Julie Williford as the program’s all-time leading scorer.

Two minutes later, junior forward Ava Tankersley beat her defender to the near post as she sent a first-time finish into the net off a cross from freshman Makenzie Malham.

“We had been slacking in the goal department, so it was nice to get more than one today,” Tankersley said. “I think a lot of people are underestimating us because we have only been winning 1-0. I think scoring two in the first five minutes was just like a slap in the face to Vanderbilt.”

The goal was Tankersley’s fourth of the year. She leads the team with 17 points and 9 assists this season.

Arkansas (10-2-1, 5-1 SEC) dominated possession for the majority of the match. The Commodores (8-2-3, 2-2-2) struggled to connect passes and create opportunities against Arkansas’ relentless press defense.

In the 48th minute, senior defender Bea Franklin headed a corner kick from Malham across the goal line to extend the lead. It was her fourth goal as a Razorback, all of which have been headers.

Franklin was helped off by the training staff with nine minutes remaining after sustaining an undisclosed injury.

Arkansas goalkeeper Grace Barbara faced just two shots on target, neither of which required a troubling save. She has been in the net for every minute of five consecutive clean sheets for the Razorbacks.

“We don’t necessarily talk about it, but we want to be good defensively, be hard to play against, be hard to score on,” Arkansas coach Colby Hale said of his team’s shutout streak.

Arkansas out-shot Vanderbilt 13-7 and improved to 8-0 when attempting more shots than its opponent this season. The convincing win came in front of a season-best home crowd of 2,263.

The Razorbacks will travel to Alabama to play the fourth-ranked Crimson Tide next Sunday. The match will be televised on SEC Network.