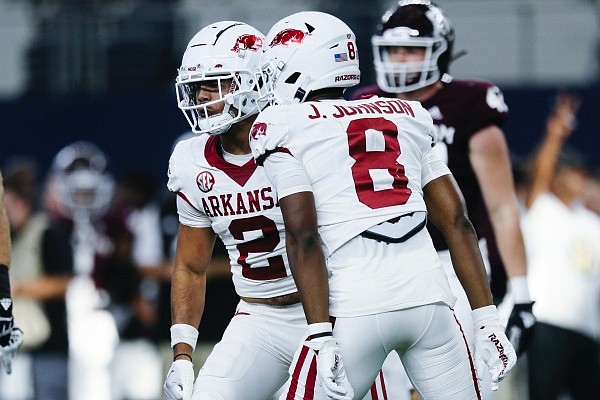 Arkansas defensive back Myles Slusher (2) reacts after a tackle, Saturday, Sept. 24, 2022, during the first quarter of a football game against Texas A&M at AT&T Stadium in Arlington, Texas.

FAYETTEVILLE — Arkansas coach Sam Pittman said Monday he is unsure of the status for three injured defensive backs ahead of this week’s game at BYU.

Safeties Khari Johnson and Jayden Johnson were injured during the first half of the Razorbacks’ 40-17 loss at Mississippi State last Saturday, and nickel back Myles Slusher did not travel for the game. Slusher has a calf injury, but the injuries for the other players are undisclosed.

Pittman said Slusher’s status is “up in the air” for the BYU game. Slusher missed two games after he suffered an upper-body injury in the first half of the season opener against Cincinnati on Sept. 3. He returned for the Razorbacks’ game against Texas A&M on Sept. 24 and also played the following week against Alabama.

“I thought he would be a little bit further along yesterday, to be perfectly honest with you, than what he was,” Pittman said.

Neither Jayden Johnson nor Khari Johnson are expected to practice Monday, Pittman said, and he indicated the prognosis sounds better for Jayden Johnson to return to the field this week.

“I don’t know that Khari will be available; Jayden could be,” Pittman said in an apparent reference to the BYU game.

The Razorbacks’ secondary has been hit with a rash of injuries this season. Safety Jalen Catalon and cornerback LaDarrius Bishop suffered season-ending injuries during the first two weeks of the season.

The lack of depth has been evident as Arkansas has struggled to slow opposing offenses. The Razorbacks enter the BYU game ranked in the bottom 10 nationally in pass defense (307 yards per game) and total defense (454.8), and ranked 108th in scoring defense (32.2 points per game).

Pittman said quarterback KJ Jefferson will be available for the BYU game. Jefferson traveled but did not play at Mississippi State because he missed two days of practice last week following an apparent head injury late in the Alabama game the week before.

“He can’t get hit today would be that protocol, but he never gets hit anyway in practice, so he can go ahead and do his full thing today,” Pittman said.