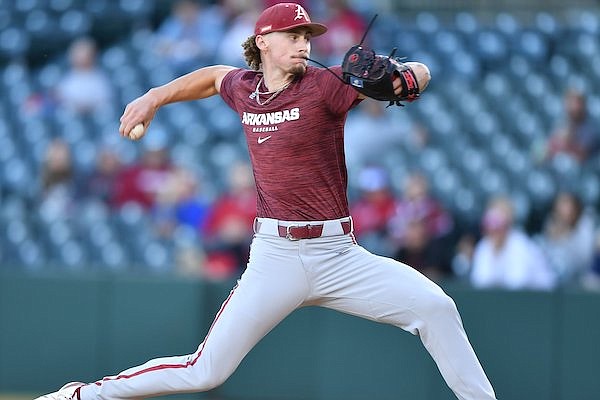 Arkansas pitcher Jaxon Wiggins throws during a scrimmage against the Texas Rangers instructional league team on Wednesday, Oct. 12, 2022, in Fayetteville.

The Razorbacks held the Texas Rangers instructional league team to four hits and Arkansas won 10-2 in the first scrimmage between the teams at Baum-Walker Stadium. The teams are scheduled to play again Thursday at 4 p.m. in a seven-inning scrimmage.

“I thought our pitching was outstanding,” Arkansas coach Dave Van Horn said. “They just kept throwing strikes. The minor-league team, they just laid off a lot of borderline pitches and they worked the count, but our pitchers did a great job and we just kept bringing guys in.”

Both of the Rangers’ runs were unearned. Arkansas third baseman Caleb Cali dropped a pop up off the bat of Chandler Pollard in the first at-bat of the scrimmage, and Josh Hatcher hit a 409-foot home run off of Wiggins with two outs to give the Rangers a 2-0 lead in the first inning.

Two of the Rangers’ hits came against Wiggins, who also gave up a two-out infield single to Echedry Vargas in the second inning. Vargas was thrown out by Arkansas catcher Hudson Polk trying to steal second base.

Polk, a transfer from Oklahoma, also went 2 for 3 and walked once. His 422-foot home run in the third inning gave Arkansas its first run. He doubled and scored in the eighth.

Van Horn was impressed with Polk’s play. He said the catcher called almost all of the Razorbacks’ 168 pitches.

“He did a great job behind the plate,” Van Horn said. “You could really see the leadership abilities there.”

Wiggins, a junior right-hander, displayed good command of his pitches. His fastball sat 96-98 mph and he impressed Van Horn with his off-speed pitches, including a 79 mph curveball against Tucker Mitchell for a called third strike in the second inning.

It was a continuation of a strong fall for Wiggins, who is looking to bounce back after an up-and-down sophomore season.

“You saw him drop his breaking balls in there and they look polished,” Van Horn said. “It’s not like he's just flipping it up there and changing his arm action. He’s getting there, and that's one reason we wanted to give him a start tonight. He’s pitched well this fall.”

Arkansas pitchers combined to strike out 15 batters and walk five. Wiggins and Hollan struck out four apiece, and Adcock and Wood each had three strikeouts.

“When you're playing a game like this and you're a pitcher, and you're only going to go one inning, or maybe 30 pitches, you're going to let it fly a little bit more,” Van Horn said. “Probably the command is not going to be as good as normal, but I thought they did a tremendous job.”

Hatcher, a 10th-round draft pick this year out of Kennesaw State who also played against Arkansas in 2021 while at Mississippi State, led off the fourth inning with an infield single against Hollan. The Rangers did not have another hit until a one-out single against Wood in the ninth.

“I feel like we did really good,” said Hollan, a junior left-hander who pitched at San Jacinto (Texas) College last season and was previously committed to TCU. “We just got behind in the first inning and Wiggins gave up a little home run that the wind helped. But other than that, we were dominant.”

The Rangers’ 2-0 lead stood until Polk’s home run to center field to lead off the third inning. It came in the first pitch from right-handed reliever Orlando Gil, who entered after right-hander Wyatt Sparks pitched two scoreless innings in a start. Sparks, 23, grew up 90 miles from Fayetteville in Aurora, Mo.

Peyton Stovall, the Razorbacks’ second baseman who went 3 for 5 with 2 RBI and drove in the go-ahead run in the fifth inning, said Polk’s home run eased some nerves in the Arkansas dugout. The Razorbacks’ roster includes 28 newcomers to the program.

“Just being able to slow the game down, I think that's ultimately what caused us to be successful late in the game,” said Stovall, the Razorbacks’ only returning defensive starter from the 2022 College World Series team. “The at-bats started getting a lot better. I think being able to do that, just slowing the game down, is really going to help us when it comes spring.”

Polk’s was the first of three Arkansas home runs. Kendall Diggs hit a 387-foot solo homer to right field to tie the scrimmage 2-2 in the fourth, and Jace Bohrofen’s three-run blast to right field was measured 411 feet in the seventh.

Bohrofen’s homer capped a five-run inning that increased the Razorbacks’ lead to 8-2. All five runs in the inning came against right-hander Jordy Arias, a 17-year-old from Mexico who was selected in this year’s international draft.

Stovall, Diggs and Polk had multi-hit games and accounted for eight of Arkansas’ 10 hits. The Razorbacks also drew nine walks and played solid situational baseball with sacrifice flies by Ben McLaughlin in the seventh inning and John Bolton in the eighth.

The Rangers are on a week-long exhibition tour against college teams. They lost 8-1 at Oklahoma State on Monday and lost 8-3 at Oklahoma on Tuesday.