Pitching stands out in Hogs' scrimmages vs. Rangers 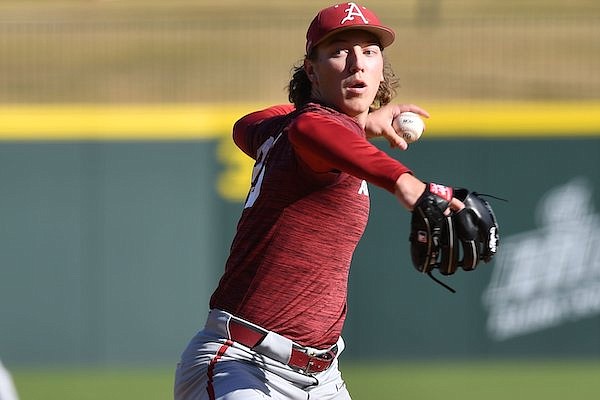 Arkansas pitcher Hagen Smith throws during a scrimmage against the Texas Rangers instructional league team on Thursday, Oct. 13, 2022, in Fayetteville.

FAYETTEVILLE — During interviews this fall, Arkansas coaches have expressed optimism about the potential of the team’s pitching staff in 2023.

The Razorbacks lost the majority of their position players, but return six pitchers who took the mound at the College World Series earlier this year. Arkansas has also added a number of freshman or transfer pitchers who are expected to contribute next season.

That depth was on display at Baum-Walker Stadium this week as the Razorbacks held batters from the Texas Rangers instructional league team to eight hits in 16 innings.

The Rangers’ bats started hot Thursday, but cooled quickly as the Razorbacks won 8-4 in a seven-inning scrimmage. Arkansas out-scored the Rangers 18-6 during the two-day exhibition series.

“I thought our pitching was really good,” Arkansas coach Dave Van Horn said. “It showed that we have depth. We have good arms and a lot of competition, but a lot of camaraderie, and that was really good to see.”

Seven Arkansas pitchers held the Rangers to 4 hits and 2 walks, and combined to strike out 5 on Thursday. Austin Ledbetter, Koty Frank and Parker Coil were especially effective between the third and fifth innings as they combined to retire nine consecutive batters on 25 pitches.

Hagen Smith, a 2022 Freshman All-American, allowed one run after a lead-off walk by Jose De Jesus in the first inning. De Jesus stole second base and scored following a pair of groundouts.

Smith, who grew up a Rangers fan in Bullard, Texas, said his performance was “OK,” but he was happy with the team’s overall performance.

“Our staff this year is showing that we have a lot of strike throwers,” Smith said, “and we commanded the zone pretty good.”

The Razorbacks’ pitchers finished the series with 20 strikeouts and 7 walks in 63 at-bats. Arkansas threw 13 pitchers against the Rangers and allowed four earned runs.

The Rangers’ only multi-run inning Thursday came against left-hander Nick Griffin, who allowed a one-out RBI triple to Keithron Moss in the second inning. Moss later scored on a sacrifice fly to give the Rangers a 3-0 lead.

Arkansas tied the scrimmage on Tavian Josenberger’s three-run home run to opposite-field left in the third inning. The Razorbacks went ahead 4-3 later in the inning when Jared Wegner bounced a single over the head of the third baseman to score Caleb Cali from second base.

Right-hander Ivan Oviedo did not record an out while facing six Arkansas batters in the fourth inning. The inning ended — or was “rolled” — following Wegner’s RBI single.

Oviedo replaced John Gessner, a 22-year-old right-hander from Australia whose only blemish in two innings was a hard-hit single by Peyton Stovall in the first. Gessner struck out four Razorbacks.

“It wasn't all about winning these last two days,” Van Horn said. “We rolled innings and scores really weren't what they would have been.”

Josenberger’s 364-foot home run just cleared the left-field fence and came at the end of a seven-pitch battle against Oviedo. The switch-hitting Josenberger fouled off the first 3-2 pitch, then drove a 91 mph fastball.

Van Horn said Josenberger, a center fielder who transferred from Kansas, has been a strong lead-off hitter since he returned from a back injury that limited him for a short time early in fall practice.

“He’s been really good at the top of the order since the day he got back in the lineup,” Van Horn said. “And it’s good to see he's kind of a little bit of an emotional leader for us, too. I can tell the guys kind of gravitate to him and they respect him. We need a little bit of that.”

Josenberger’s was the first of two home runs for Arkansas on Thursday. Freshman Reese Robinett blasted a 432-foot home run to center field in the bottom of the seventh to plate two runs.

The Razorbacks led 6-4 after the top of the seventh, but batted in the bottom of the inning to provide more live experience for players on both sides.

Arkansas out-hit the Rangers 9-4. Parker Rowland, a JUCO transfer catcher, had two hits. Rowland singled to lead off the four-run third inning, and hit a two-out RBI double in the fourth that scored Jace Bohrofen to give the Razorbacks a 5-3 lead.

Both of Rowland's hits came against Oviedo, a 20-year-old second-year pro from the Dominican Republic.

Robinett’s home run was against one of the Rangers’ oldest players, 23-year-old right-hander Andy Rodriguez, who signed in this year’s international draft after playing at Miami Dade Community College in Florida.

The Razorbacks also scored an unearned run against 18-year-old right-hander Daniel Keaney, who signed with the Rangers out of Guilderland (N.Y.) High School earlier this year as an undrafted free agent.

The Rangers traveled 41 players to Fayetteville and played an almost-entirely different lineup Thursday than the one that lost 10-2 the day before. The only player who started both games was designated hitter Tucker Mitchell, who went 1 for 3.

Will McEntire, a starter for the Razorbacks at the College World Series, pitched the sixth inning and gave up an RBI double to Liam Hicks, a former Arkansas State catcher. Dylan Carter pitched a scoreless seventh for Arkansas.

Van Horn said the pitchers who did not throw against the Rangers will have a “situational-type scrimmage” Friday. Some pitchers will be shut down for the rest of the fall season that concludes next week with the team’s Fall World Series, which will be played Monday and Tuesday beginning at 1 p.m., and Thursday at a time to be determined.

The Rangers are 0-4 on their week-long college exhibition tour. They lost 8-1 at Oklahoma State on Monday and 8-3 at Oklahoma on Tuesday, and are scheduled to host TCU on Friday at Globe Life Field in Arlington, Texas.