'That was incredible': Landers breaks out in win at BYU 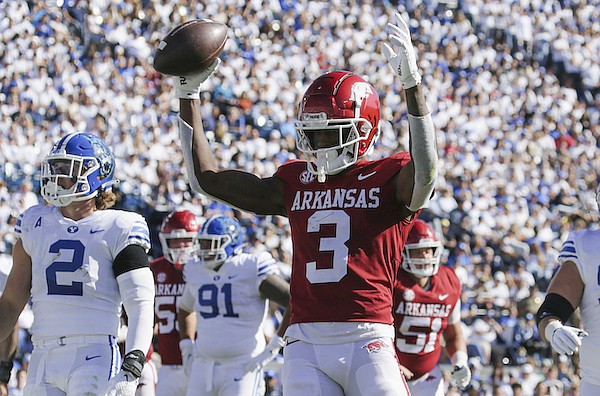 He made an exception Saturday following Arkansas’ 52-35 victory over BYU in Provo, Utah, calling on cornerback Keuan Parker and wide receiver Matt Landers. On a day when the Razorbacks' offense could essentially do no wrong, Landers stood out.

The transfer from Toledo who began his career at Georgia served as a go-to target for Arkansas quarterback KJ Jefferson, and assisted the Razorbacks as they racked up 644 yards of offense – the second most under third-year offensive coordinator Kendal Briles.

“I don’t know if Matt thought we were going to be airing it out on every play when he came here,” Pittman said. “I mentioned him today. I thought that was really good for Matt and for the team.”

Landers finished the Razorbacks’ fourth win of the season with a career-high 8 receptions for 99 yards and 3 touchdowns. The performance is all the more impressive given his productivity of late.

In the previous 3 games, Landers had caught just 3 passes for 50 yards. On Saturday he became the sixth Arkansas player with three touchdown grabs in a game.

He is the first to accomplish the feat since tight end Jeremy Sprinkle caught 6 passes for 47 yards and 3 touchdowns against Mississippi State in November 2015.

“That’s something,” Pittman said. “I was so happy for him. He hadn’t had a touchdown all year, and for him to score three, that was incredible. And, of course, KJ threw the ball to him, but I really felt so happy for him.

“It validated him getting into the portal and coming to us.”

Jefferson, who threw for 367 yards and a career-high five touchdown passes, said the key to Landers’ day was getting him involved early in the game.

He caught 2 passes in the first quarter for 12 yards, and added 2 more for 31 yards ahead of tight end Trey Knox’s 6-yard score in the opening minutes of second quarter. Landers, later in the first half, brought in the first touchdown catch of his Arkansas career on a 4-yard pass from Jefferson.

It put the Razorbacks ahead 24-21, and they led the rest of the way.

After halftime, he caught touchdown passes of 39 and 5 yards from Jefferson. Arkansas finished the game with nine pass plays of 15-plus yards, and Landers accounted for a pair of them.

“(We wanted) to get his confidence raised up,” Jefferson said, “and keep encouraging him. We know what type of player Matt is, what caliber of player (he is) and the physicality he brings to the game, and knowing he can stretch the field vertically.”

Entering the game, 16 of Landers’ 17 receptions had come in games at Reynolds Razorback Stadium. He did not have a catch last Saturday at Mississippi State, ending a 10-game run of at least one reception that dated to last season.

But he made the most of his team-high 10 targets in LaVell Edwards Stadium.

“Just being able to get him the ball as quick as possible (was key),” Jefferson said, “and letting him build his confidence up.”