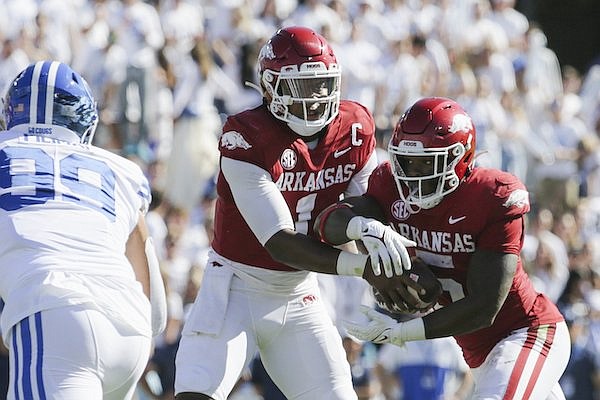 Arkansas quarterback KJ Jefferson (1) hands to running back Raheim Sanders (5) during a game against BYU on Saturday, Oct. 15, 2022, in Provo, Utah.

PROVO, Utah — KJ Jefferson pulled off perhaps the greatest Houdini escape of his career and threw a career-high five touchdown passes as the University of Arkansas rebounded from a three-game losing streak to overwhelm Brigham Young on Saturday.

Raheim Sanders added a career-high 178 rushing yards and Matt Landers caught three touchdown passes as the University of Arkansas offense racked up 644 total yards to subdue the Cougars 52-35 before a crowd of 63,470 at LaVell Edwards Stadium.

The Razorbacks (4-3) scored on eight consecutive possessions after a shaky start and gained the upper hand with a pair of key defensive stops in the second quarter to end their skid heading into a much-needed open date.

“This was everything,” Coach Sam Pittman said. “Because we had the bye, I wanted to let the kids know how big this is for us.

“I know it didn’t have anything to do with SEC standings … but it had everything to do with confidence that we needed. Everything. To beat a team on the road like BYU, that should help us. But yeah, we put all the eggs in this basket and fortunately it worked this time.”

Said senior linebacker Bumper Pool, “He was exactly right, it was a must win for us, and I think that showed today.”

Arkansas outgained the Cougars 644-471 in total offense and won the turnover battle 3-1 with an interception and two fumble recoveries.

“You won’t win a lot of games if you give up 52 points,” BYU Coach Kalani Sitake said. “I think what’s frustrating is losing the turnover battle because that’s not our identity. … I think Sam Pittman is a great coach, and he had his guys ready.”

Jefferson was clearly ready, returning from a one-game hiatus with a vengeance by hitting 29 of 40 passes for 367 yards in becoming the fourth Arkansas quarterback to throw five touchdown passes in a game.

“That’s why you want to play college football, just to have those memories and be able to reflect back on it,” Jefferson said about coming out on top in a shootout. “Being able to embrace that moment to be in college ball, it’s truly amazing.”

Jefferson’s final play was a 5-yard run to convert a second-and-4 play down to the BYU 2-yard line. At that point, the Razorbacks had nearly burned 10 minutes off the clock after taking possession with 10:29 left.

Jefferson took a fall on his shoulder on the play, and Arkansas fans hoped he hadn’t endured a second head injury in three weeks.

“I’m doing good,” Jefferson said. “I actually got a stinger. All the years I’ve been playing football, I’ve never had a stinger. It kind of scared me because it went numb a little bit, and I was like, ‘Did I break my neck or something?’ So I mean, I’m doing good.”

The Razorbacks would have scored on nine consecutive possessions but the BYU defense bowed up inside the 2-yard line and turned back four consecutive runs, three from AJ Green and one from reserve quarterback Malik Hornsby.

The game turned late in the second quarter after Arkansas cut into BYU’s 21-14 lead on Cam Little’s 34-yard field goal.

On a third-and-12 snap, BYU quarterback Jaren Hall scrambled up the middle and was initially ruled to have gained the necessary 12 yards for a first down. However, the replay review moved him back a yard, setting up fourth and 1 from the Cougars’ 34.

Sitake sent his offense back on the field to run a quarterback sneak. Hall bobbled the snap and Arkansas safety Latavious Brini recovered at the 34.

“I think that fourth and 1 really shifted the tide,” Arkansas cornerback Hudson Clark said. “Coming off the field quick was huge for our defense.”

Said Pool, “The D-line, credit to them. We stemmed them inside, they went man-to-man, stuffed them, got the ball back, huge momentum shift.”

Arkansas capitalized quickly. Green had a 14-yard run, then converted a first-and-25 play with a 30-yard catch and run to the Cougars’ 4.

Jefferson rolled left and connected with Landers with 3:39 left in the half to give Arkansas a 24-21 lead.

Arkansas converted 12 of 15 third-down plays, perhaps none bigger than a third and 11 with just over a minute left in the half. Three BYU defenders had a shot at sacking Jefferson, who kept spinning and shucking defenders until he freed up long enough to find Trey Knox on the right sideline. The tight end turned Jefferson’s big escape into a 36-yard gain to the BYU 22.

Jefferson said he watched a replay of that highlight just before coming into the interview room.

“I didn’t know I broke that many tackles,” he said. “But I mean, I knew it was third down, so I knew I had to make a play. And so at that point, we were just trying to keep the momentum on our side, keep scoring while the offense was hot.”

Said Arkansas tackle Dalton Wagner, “I don’t even know how many tackles he broke on that play, but it was insane to see him just get up and keep running.”

Three plays later, Jefferson found Dubinion uncovered on a wheel route for a 15-yard touchdown with 40 seconds left in the half, giving Arkansas a 31-21 lead and setting the tone for the second half.

BYU scored on its first two drives of the second half to pull within three twice, but they could not keep pace with Jefferson and the Hogs’ offense after Pittman told offensive coordinator Kendal Briles to open things up and attack the middle of the field.

“Our offense was on fire for most of the game, and Kendal Briles needs credit for that,” Pittman said.

Arkansas tried sending pressure at Hall, but he picked them apart early. In the second quarter, Pittman and defensive coordinator Barry Odom elected to go almost exclusively with a three-man front and zone coverage.

“I told Barry, ‘I don’t care if they run the ball on us for 400 yards. I don’t care. Make them run it,’” Pittman said. “And we went to our three-man line. … I was tired of seeing interferences and guys open and scoring. So was Barry.”

Landers, who had not scored a touchdown in his first six games with the Razorbacks, caught 8 passes for 99 yards on 10 targets. His touchdowns in the second half came on a 34-yard grab after beating Gabe Jeudy-Lally on a slant and go, and a 3-yard catch against the BYU zone. Both scores extended Arkansas’ lead to 10 points.

The Razorbacks forced a three and out the final snap of the third quarter, allowing them to get real separation.

Sanders broke free behind pulling blockers Beaux Limmer and Hudson Henry over the left edge and raced 64 yards to make it 52-35 with 14:25 left in the game.