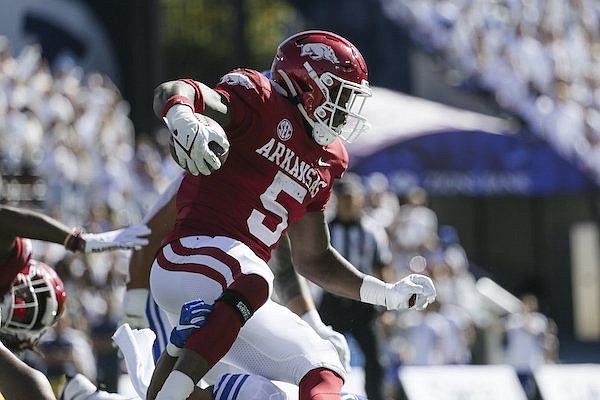 Arkansas running back Raheim Sanders (5) carries the ball during a game against BYU on Saturday, Oct. 15, 2022, in Provo, Utah.

For the second time this season, Sanders bounced back from an early fumble to have a career-high rushing game and help the University of Arkansas win.

Sanders, a sophomore from Rockledge, Fla., had 15 carries for a career-high 175 yards and 2 touchdowns on Saturday in the Razorbacks’ 52-35 victory over BYU at LaVell Edwards Stadium.

The record-setting performance by Sanders came after he lost a fumble on his first carry of the game.

After a 3-yard gain by Sanders to the Arkansas 48, BYU outside linebacker Max Tooley forced a fumble and middle linebacker Keenan Pili recovered for the Cougars.

“When I had that fumble, I was mad at myself,” Sanders said. “A lot of people came up to me and said, ‘It’s good. Next play, next play.’

“I just felt better with them coming to me. I felt like that right there made me go crazy afterwards.”

Sanders also went crazy after he lost a fumble in the first quarter against Missouri State on a first-and-goal play from the 1. He came back to rush 22 times for 167 yards and 1 touchdown and turned a shovel pass into a 73-yard touchdown to help the Razorbacks beat the Bears 38-27.

The last score in Saturday’s shootout was Sanders’ 64-yard run with 14:25 left in the fourth quarter when he broke free down the sideline on a counter play and got key blocks from guard Beaux Limmer and tight end Hudson Henry.

“Hud was the second puller on that,” Arkansas Coach Sam Pittman said. “Beaux was one and Hud was two. He got a fantastic block. He was so pumped up.

Sanders said he talked to Henry before the play that gave Arkansas a 17-point lead.

Razorbacks offensive tackle Dalton Wagner, a sixth-year senior, said Sanders did an awesome job coming back from his fumble.

“There’s one thing I know, Rocket’s mistakes are few and far between,” Wagner said. “When he does make a mistake, he takes it very personal, and you could tell he didn’t want to let that happen again.

“So he put it on his back whenever he had the chance to get open or to run the ball, and he really strained his ass off for that.”

“I mean, it shows character, just being able to respond to adversity like he did,” Jefferson said. “If you don’t have great character, a great mindset, then that can totally screw you for the rest of the game, and one bad play might lead to another bad play.

“But Rocket, the character that he has and the mentality he has just to be able to respond to adversity how he did, it’s truly amazing for him to be as young as he is as well.”

Sanders sat out the last few minutes of the second quarter and most of the third quarter before his strong finish.

“I didn’t feel like he was hitting the holes the way he should have, and he put the ball on the ground,” Pittman said. “We’ve got to let guys think about it for a minute. We’ve got other backs that can go in there, but he’s a great kid and he rebounded.”

Pittman was asked if he believed Sanders was motivated by sitting out.

“I don’t know. I think it’s pretty motivating for anybody who cares, and I know he does,” Pittman said. “Anytime you’re thinking you should be in the game and you’re not, I think it’s motivating.”

Sanders said it was motivating for him, and also helped him settle into the game.

“My mind was going and I was thinking a lot,” Sanders said. “I feel like what I messed up this game for me, what I did bad, was thinking too much.

“As a running back, I feel like you should not think as much and just get the ball and go. That’s what I did with that play when I made the long run.”

On a day when BYU gained 471 yards, Sanders helped the Razorbacks gain 644.

“I think Rocket’s unbelievable,” Arkansas senior linebacker Bumper Pool said. “I think he’s a great running back. Nothing else to say there.

“I mean, he’s just consistent every week. He battles his injuries, and he just comes in every day, puts his head down, goes to work, gives us his best. He’s a stud.”

Through seven games, Sanders has 140 carries for 870 yards and 7 touchdowns and 15 catches for 189 yards and 1 touchdown.

“Pretty incredible,” Pittman said. “If you had told me at the beginning of the year … game seven, and what’s he have already, close to 900 yards?

“If you had said that, I would have said the offensive line is kicking major butt, and he’s running extra hard. But I think he’ll just get better. He’s a conscientious kid and works extremely hard.”

Jefferson said Sanders has been carrying a heavy load.

“A lot of people going into the season didn’t really know who Rocket was,” Jefferson said. “Now he’s catching everybody’s attention by storm.”

“He’s the first one to always thank us after a big run,” Wagner said. “He bails us out of a lot of bad situations and we bail him out of some bad situations.