There was no denying Hogs in Utah 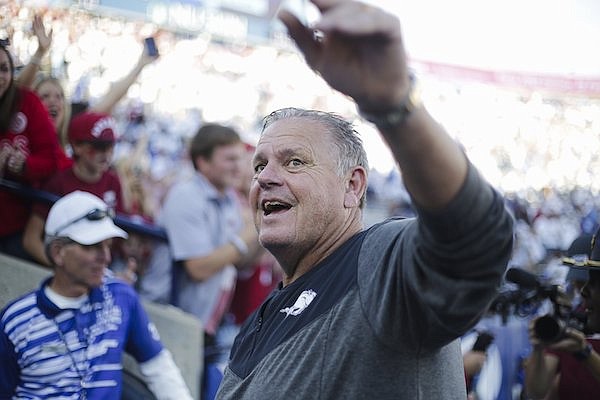 PROVO, Utah — It appeared Arkansas’ defense was going to have to be its offense and it could have been.

The Razorbacks scored on eight consecutive possessions, including three turnovers the defense forced, and strolled out of this scenic haven with a 52-35 much-needed quality win.

The last thing the Razorbacks needed going into an open weekend was a loss, and especially not a loss in a nonconference game, even on the road with a great hometown atmosphere.

Arkansas won the toss and wisely put its offense on the field but on the fifth play lost a fumble, and the Cougars couldn’t capitalize. Neither could the Razorbacks when they got the ball back.

Aided by a pass interference call, BYU took the lead on a 10-play, 82 yard drive. The Cougars’ next scoring drive was helped by two pass interferences and gave them a 13-7 lead as the first quarter ended.

The magic, though, was just beginning for the Razorbacks.

After Arkansas rushed 54 of 75 yards for its first touchdown, the Cougars sold out to stop the Razorbacks’ vaunted run game. The Razorbacks then started marching up and down the field, mostly through the air.

Their second touchdown was a 75-yard drive and 66 came through the air including, Trey Knox’s 6-yard touchdown reception.

BYU was leading 21-17 when it fumbled and Latavious Brini recovered for the Hogs. KJ Jefferson passed for his second touchdown, but he was just warming up.

Hudson Clark got an interception and on a third and 11 from his own 42, Jefferson got wrapped up twice but refused to go down. When he finally found a little breathing room, he passed to Knox, who also broke two tackles, and three plays later Jefferson passed 15 yards to Rashod Dubinion for a touchdown and a 31-21 halftime lead.

Jefferson and the Razorbacks were far from finished.

At that point, they had converted seven of nine third downs, scored all five times they got in the red zone and had 373 yards of offense.

The Cougars came out running in the second half and made it look easy with back-to-back 75-yard drives for touchdowns. Those were sandwiched by a two-play, 75-yard scoring drive that took just 33 seconds and ended with a 39-yard scoring pass from Jefferson to Matt Landers who would finish the game with 10 catches, 99 yards and three touchdowns.

The Razorbacks covered 75 yards, 59 in the air, including Landers’ final touchdown. Going into the fourth quarter the Hogs led 45-35 and BYU was punting for only the second time of the game.

A 64-yard touchdown run by Raheim Sanders gave the Razorbacks their third touchdown in just 5:02 of the second half and that set the final margin as BYU fumbled and Clark recovered.

This time, the Razorbacks ran 10:02 off the clock in a drive that ended at the BYU 1 with 27 seconds to play.

Arkansas rarely plays nonconference games on the road and that could have been a problem. As could the elevation and an offense that racked up 471 yards but only 192 in the second half, when the defense forced BYU’s Jaren Hall out of the pocket and made him throw on the run. The crowd was hostile.

The Cougars were tough and talented. They returned 20 starters from a 10-3 team, but the Razorbacks never flinched. No matter, BYU had 356 yards passing, but on this day the Razorbacks were not going to be beaten, especially with an offense that had 644 yards, 367 in the air.

If necessary, the Arkansas defense could have been the offense.