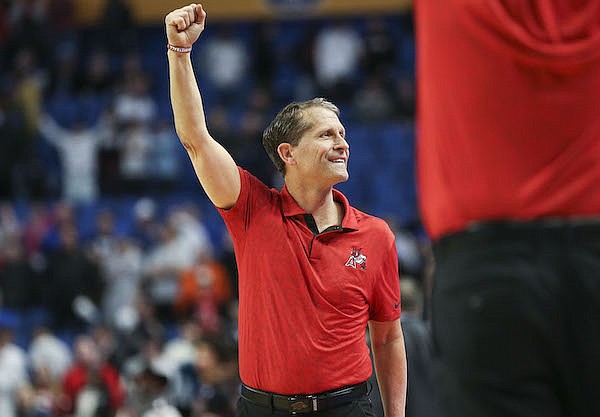 Arkansas coach Eric Musselman reacts, Saturday, March 19, 2022, during the second half of the second round of the 2022 NCAA Division I Men's Basketball Championship at KeyBank Center in Buffalo, N.Y.

BIRMINGHAM, Ala. — Mississippi State coach Chris Jans on Wednesday poked fun at a reporter who brought up a bad coaching memory for him.

That memory was his final game as head coach at New Mexico State in March. It was a 53-48 loss to Arkansas in the second round of the NCAA Tournament in Buffalo, N.Y.

“Yeah, it was a heck of a college basketball game,” Jans said at SEC Media Day. “If you like low-scoring games, you really enjoyed it. But it was a rock fight.”

Jans, who spent one year at Bowling Green prior to a five-year stint at New Mexico State, admitted he still has not rewatched the Aggies’ loss to the Razorbacks.

More from WholeHogSports: Musselman and other SEC coaches on board with summer-time basketball

New Mexico State, a No. 12 seed in the NCAA Tournament, advanced to play Arkansas after an upset victory over No. 5 seed Connecticut. Former Aggies guard Teddy Allen scored a game-high 37 points against UConn and was the lone New Mexico State player to reach double figures.

The Razorbacks held the Aggies to 34% shooting and limited Allen to 12 points on 5 of 16 from the field. Arkansas also forced 19 turnovers — New Mexico State’s most since a Jan. 22 victory at Stephen F. Austin.

“I still haven't watched the game. I will at some point, hopefully before the season starts,” Jans said. “Those days are ticking. I've been saying that for a while. You know, we had our chances, we had our opportunities, but they kept fending us off if you will.

“Then in the end (they) made a bunch of free throws down the stretch. I think they missed one all game long and did an excellent job of figuring out a way to win.”

For Arkansas coach Eric Musselman, it secured his third Sweet 16 appearance as a head coach, and it was Arkansas’ second berth in as many seasons. The Razorbacks went on to upset top-seeded Gonzaga in the following round.

Jans said Musselman, who is entering his fourth season leading the Razorbacks, has made the Arkansas program his own and done so in a unique way. The Razorbacks last season won 28 games, the sixth most in a season in school history.

“He did it at Nevada,” Jans said. “He’s had a lot of success with recruiting and transfers specifically. He has taken that blueprint over to Arkansas, and he has (led) one of the better college basketball teams since they've been here each and every year.

“I think it speaks volumes to him and his staff to their ability to track players that want to play for him and their style, and that university. He has obviously got that program in great shape.”