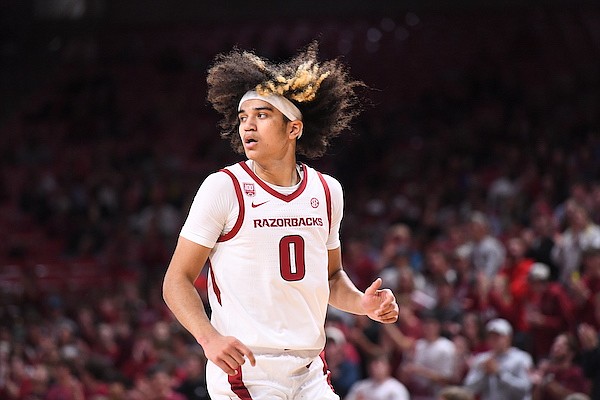 Arkansas guard Anthony Black is shown during an exhibition game against Rogers State on Monday, Oct. 24, 2022, in Fayetteville.

FAYETTEVILLE — The length and athleticism of Arkansas’ basketball roster were on full display Monday night.

Anthony Black and Trevon Brazile each brought the Bud Walton Arena crowd to its feet with high-flying slams. However, for every few jaw-dropping dunks, there was an ill-advised lob or turnover.

Arkansas coach Eric Musselman pinned the team’s high turnover tally on players trying to do too much instead of playing it simple.

“It was turnovers off of trying to make home-run plays,” Musselman said. “Pressure, I don’t think is going to bother us. It’s more just us understanding the value of the ball."

Musselman added that the turnovers will be cut down as the player rotation shrinks.

“It will be reduced when I stop playing guys who are turning the ball over," Musselman said.

Musselman talked up Nick Smith’s preparation prior to Monday’s exhibition. He said the freshman guard was the one guy watching film on the Hillcats during the pregame team meal.

Early in the first half, it looked like Smith was set to take over the game. He scored seven points in the first three minutes before anyone else got on the scoresheet.

However, he tallied just two more points throughout the contest and sat out for the majority of the second half.

“I thought Nick was ready to play,” Musselman said.

Going hard in the paint

Arkansas’ interior defense was impenetrable — giving up no points in the paint in the first half. The Razorbacks out-scored the Hillcats 42-14 throughout the exhibition.

“If you want to get on the floor, you’re going to have to play defense with us,” Musselman said.

Arkansas held a 42-22 advantage in rebounding, with eight 8 players grabbing at least 3 boards.

Although Davis and Ricky Council did not start, Musselman said he told the team before the exhibition that he considers both of them to be starters.

“I told them I was going to bring them off the bench tonight,” Musselman said. “I love looking down at the bench and seeing those two guys because I know they can come in and change the complexion of the game,”

Davis missed his only shot attempt and provided 3 rebounds, 3 assists, and 1 steal in 18 minutes. Council scored 8 points to go with 3 assists and 2 rebounds in 21 minutes.

The Razorbacks had no issue getting to the free-throw line against the Hillcats. However, they converted just 20 of 37 attempts.

Arkansas had nine different players attempt a free throw. Freshman Barry Dunning (2 of 2) was the lone Razorback not to miss from the charity stripe.

“We’ve got to improve drastically in our free-throw percentage,” Musselman said. “We left way too many points on the board.”

Musselman joked he was in mid-season form when discussing his technical after he disagreed with a charge called on Mahkel Mitchell in the first half.

It was the second technical foul he’s received since the end of last season. The first came overseas during the Hogs’ European tour.

He said there was no strategic element involved in his foul, but he rather “blanked out” in the heat of the moment.