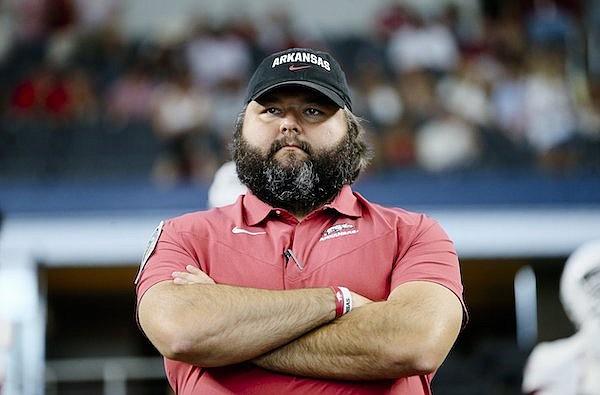 His sister Belle graduated from the UA last year and lives in the Fayetteville area. While she’ll support whatever college her brother decides to attend, she’s not shy about her preference.

When Anderson received his offer from the Razorbacks on Sept. 12, his sister was ecstatic.

“When I got it [the offer], she was flipping out,” Anderson said. “Like she told all her friends. All of her friends were texting me and trying to recruit me. It was funny.”

She’s also vocal when he receives other offers, too.

“So whenever I get like other offers, she’ll text my mom and she’s like, ‘So does that mean, he’s not coming?’ ” Anderson said. “Like when I got Bama [offer] she called me and she was like, “So this better not mean Arkansas is kicked off.’ I said definitely not.”

A consensus 4-star prospect, on3.com rates Anderson the No. 10 interior offensive lineman and No. 151 overall recruit in the nation for the Class of 2024.

His highlight video shows a physical, mobile lineman and dominant prospect who often times ends up pancaking his defender.

Anderson, who has a grade-point average in the 3.8 range, is looking to major in kinesiology with plans of becoming a coach. He said he has a high level of interest in Arkansas and a lot of that has to do with his relationship with Pittman and Kennedy.

“Him [Kennedy] and Coach Pittman FaceTime me once a week,” said Anderson, who received and read 13 handwritten letters from the Arkansas staff on Monday. “I haven’t gotten that from anywhere else.”

The communication with Pittman and Kennedy is a big deal to Anderson.

“During the season, recruiting I understand that recruiting sort of comes to a pause but they’re going out of their way to call me and contact me,” Anderson said. “I think that’s really awesome.”

Anderson is familiar with Fayetteville and the Hogs because of frequent visits to see his sister. He also learned about the Razorbacks when his brother Nate, an offensive lineman, was recruited by former coach Chad Morris and staff before signing with Oklahoma for the 2020 class.

He’ll get his first look at Hogs as a recruit when he visits for the LSU game on Nov. 12. He hasn’t announced a list of top schools, but he’s fond of the Hogs.

“I would say it’s up there,” Anderson said.