Diamond Hogs load up on commitments 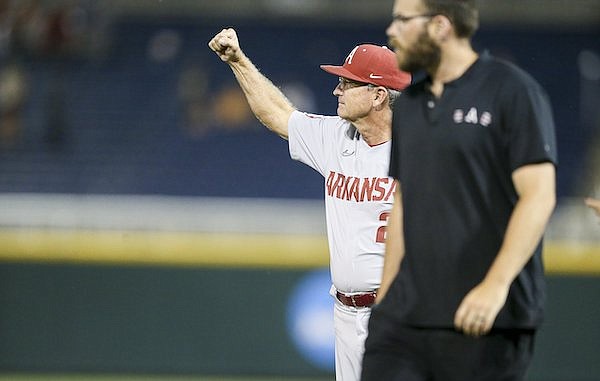 Farrell, 6-3, 210 pounds, of Owasso, Okla., helped the Rams win their 14th state championship in May. He was named a first-team Tulsa World selection.

Cornelison, 5-10, 180 pounds, of Springdale Har-Ber, has seen his fastball increase 5 mph since the summer of 2021, according to Perfect Game. He hit 85 mph on the radar gun over the summer.

Perfect Game reports Farrell hitting 85 mph on the radar gun over the summer, throwing six no-hit innings and recording 13 strikeouts in a game against Risin Baseball-Phillips on June 13. He threw 83 mph the previous summer.

“Luke is a very strong and powerful shortstop in the 2025 class from Har-Ber,” Brewster said. “He played shortstop and hit in the three-hole for our Sticks 15-under team this past summer. It is easy to see him move to third base in the future with his size and power. He has extremely good range for his size.

Class of 2024 infielder Gabe Fraser announced his decision to be a Razorback on Tuesday.

Fraser, 6-1, 180 of Huntington Beach, Calif., picked Arkansas over Texas, Tennessee and Southern Cal. He visited Fayetteville over the weekend and attended a camp on Saturday.

He quickly knew he wanted to be a Razorback.

“As soon as I stepped in Baum-Walker Stadium, I knew I was home and it was a place where I wanted to be,” Fraser said. “Along with the great coaching staff and their ability to get their players ready for the next level, me and my family made the decision to be a Razorback.

"I have already gotten lots of love from the Razorback family, and I can’t wait to get on campus.”

Fraser is reported to have recorded a time of 7.01 seconds in the 60-yard dash during the summer, per Prep Baseball Report, and hit 87 mph on the radar from the outfield, and 86 mph from the infield.

He only played a few games during the summer with Team California after having being hit by a pitch and breaking a finger. Playing in the SEC was also a big draw for him.

“It was always a dream of mine to play in the SEC,” Fraser said. “Being from the West Coast, it’s a grind to get the attention from those types of schools. I am very thankful I was able to run into the incredible coaching staff at Arkansas.

"I don’t think I would have made the decision without loving the coaching staff as much as I do, and for them to make me feel at home from there was huge for me.”