Jefferson used to taking show on the road 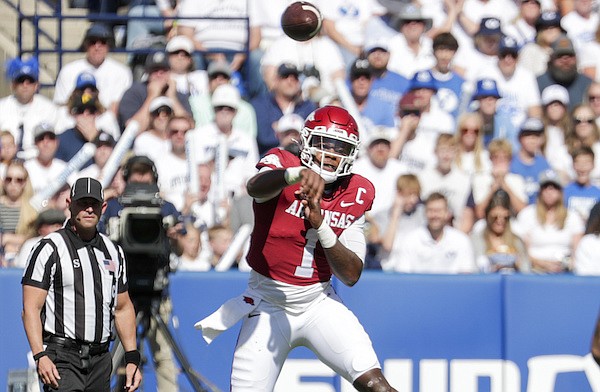 FAYETTEVILLE — Few quarterbacks in the Southeastern Conference take the show on the road as well as Arkansas’ KJ Jefferson.

The Razorbacks’ 52-35 victory over BYU in Provo, Utah, on Oct. 15 was a prime example. Arkansas’ second-year full-time starter threw for 367 yards and career-best five touchdowns after sitting out the team’s road loss to Mississippi State the week before due to an injury.

Throughout his time with the Razorbacks, Jefferson has largely been effective through the air, and efficient. He has a career completion percentage of 64.7, and he has thrown only six interceptions.

But one could argue the Mississippi native plays his best football on the road, often in hostile environments.

“He’s a competitor and wants to do well at home and away,” Arkansas coach Sam Pittman said Wednesday, “but I think that might just be some competitive emotions that he's having there.

“He really has played extremely well on the road.”

More from WholeHogSports: Sam Pittman's final media availability ahead of game at Auburn

Jefferson, dating to his freshman year in 2019, has connected on nearly 67% of his 190 pass attempts for 1,605 yards and 15 touchdowns in road venues. He has thrown only one interception — on a Hail Mary at the end of the first half at Ole Miss in 2021.

Four of his six highest yard totals have come in opponents’ stadiums. Starting in place of an injured Feleipe Franks late in 2020, Jefferson threw for 274 yards and 3 touchdowns in Arkansas’ 50-48 loss at Missouri.

Jefferson then passed for 326 yards at Ole Miss and Alabama in 2021, finishing with 3 touchdowns in each game. And at BYU, he became the second Arkansas quarterback to throw five touchdowns on the road. Brandon Allen was the other.

“Some guys play better on the road just because they're the guy on the team, and they're getting booed, all this kind of stuff,” Pittman said. “They embrace that, being the guy. I think that says a lot about KJ.”

During Arkansas' bye week, Pittman said Jefferson did not throw the ball so he could rest a shoulder that has nagged him since before the Texas A&M game in late September. The third-year coach noted the quarterback has had a strong first two days of practice leading up to Saturday’s game at Auburn.

Pittman has enjoyed watching Jefferson evolve in their time together.

“(He has) a lot of confidence,” Pittman said. “I think he understands the offense better. His percentage of accuracy on reads has gone up. I think it just has a lot to do with his confidence and being another year as a starter and the guy and all those things.

“I’ve seen a lot of better throws, more zip on the ball. I just think he's a much better quarterback."

Against Auburn last season in Fayetteville, Jefferson completed 21 of 35 passes for 228 yards and 2 touchdowns. He also rushed for 66 yards on 18 carries in the 38-23 loss.

Pittman anticipates Jefferson will be fired up for the rematch with the Tigers, who have won six consecutive games in the series by an average of 29 points.

“KJ didn't play well against Auburn last year,” Pittman said. “I think that's a driving force for him. Obviously they did some things that had success against us and him.

“I think it is personal to our guys.”