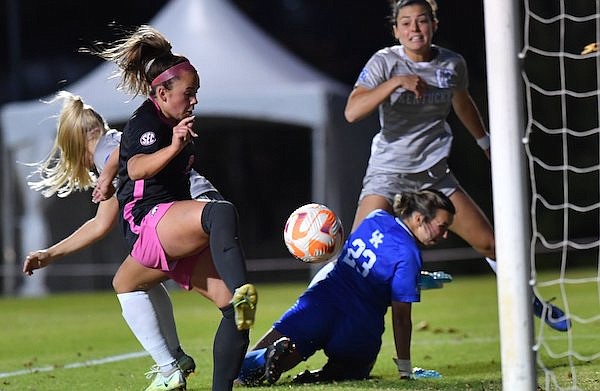 Arkansas' Zoe Susi (left) scores Thursday, Oct. 27, 2022, around Kentucky goalkeeper Steph Stull (23) during the first half of play at Razorback Field in Fayetteville.

FAYETTEVILLE — Arkansas' soccer team kicked its offensive troubles to the curb during a dominant 6-0 victory over Kentucky on Thursday night.

The ninth-ranked Razorbacks (11-3-3, 6-2-2 SEC) entered the match coming off consecutive scoreless ties. They had scored just one goal in the previous three games against Alabama, LSU and Ole Miss.

The home squad needed only 13 minutes against the Wildcats to score four goals on Senior Night at Razorback Field.

Arkansas coach Colby Hale never panicked about the team’s lack of scoring because it continued to create an abundance of goal-scoring opportunities. He thinks the team has a chance to hit its stride in postseason play if it remains clinical in front of the net.

“You could see it coming a little bit,” Hale said of the offensive success. “In the past, some of these teams were peaking already. This team has not.”

Kentucky (7-9-2, 0-8-2 SEC) finished the regular season without a conference victory.

Arkansas freshman midfielder Makenzie Malham opened the floodgates with a rebound off a scrum near the penalty spot in the second minute. The score was the second of her career and ended a personal 14-game goalless drought.

The Razorbacks doubled their advantage two minutes later. Junior forward Ava Tankersley corralled a loose ball after a failed Kentucky clearance and laced a bullet just underneath the crossbar with her weak foot. She recorded a brace in the 65th minute to cap the night.

Tankersley’s emergence has been invaluable to the Razorbacks as she leads the team in points (25) with a career-high 11 assists and 7 goals this season.

Freshman forward Zoe Susi scored her first collegiate goal in the eighth minute. The Wildcats' goalkeeper whiffed on a cross from Anna Podojil and it fell to Susi, who flicked it into an empty net.

“It was a long time coming,” Susi said. “I hit a rough patch, but I’m glad to be back. I feel like I stepped up my game tonight.”

Podojil, Arkansas’ all-time points leader, refused to be left off the scoresheet. In the 13th minute, she settled a cross from Malham and calmly slotted the ball into the lower left corner.

Her 44th career goal tied Julie Williford as the top scorer in program history. Williford’s record was set in 2003.

Hale praised Podojil by calling her one of the best players in the country, and said he couldn’t put into words what she meant to the program.

Due to the sizable lead, Podojil played a season-low 32 minutes. The Razorbacks did not let up in the second half despite rotating the squad and added two more scores in the final 45 minutes.

“It was great to get a bunch of people in and give them an opportunity,” Hale said.

In the 56th minute, senior midfielder Jessica De Filippo cut inside to her right foot at the top of the 18-yard box and unleashed a strike past the diving goalkeeper.

On the defensive end, the Razorbacks continually stifled Kentucky’s attempt to play out of its backfield. The Wildcats never truly threatened to score.

Arkansas goalkeeper Grace Barbara was not forced to make a save until the 59th minute. She extended her program record with her 11th shutout this season. Eight shutouts have come in SEC play.

The Razorbacks secured the No. 4 seed at the SEC Tournament and will play the fifth-seeded Vanderbilt at 7:30 p.m. in Pensacola, Fla. The match will be televised on SEC Network.