'He's really unique': Anthony Black is only scratching the surface of his potential 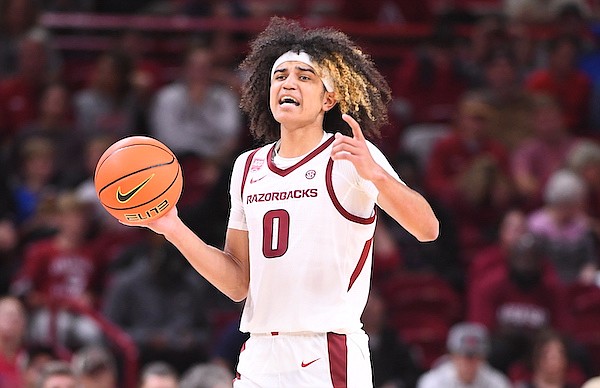 Arkansas point guard Anthony Black calls out a play during the Razorbacks' exhibition against Rogers (Okla.) State on Oct. 24, 2022, at Bud Walton Arena in Fayetteville.

FAYETTEVILLE — In his brief time at Arkansas, Anthony Black has already proven that there is not much he can’t do.

Need a player who can not only throw pinpoint lob passes, but be on the receiving end of them? Check.

Need a stingy on-ball defender who can disrupt the rhythm of opposing teams’ sets? No problem.

Need someone to get a group through airport security in a foreign country? Again, Black has got it covered.

A talent plenty capable of being a Swiss Army knife for the Razorbacks in an expectations-packed 2022-23 season, Black, at 6-7, possesses a wide-ranging set of skills that are uncommon in college basketball at the point guard position.

If the impression Black has made in the offseason and this preseason are any indication of what is to come, the freshman’s ascent in the coming months could be special to watch.

“It’s just crazy to play with somebody that versatile on the court,” Missouri transfer forward Trevon Brazile said of Black. “Then, off the court, great personality. I got really close with him on the foreign tour.

Arkansas coach Eric Musselman learned all about his makeup during a fierce recruiting battle for the Duncanville, Texas, standout. Black also considered Gonzaga, TCU, Oklahoma State and an opportunity to play in the NBA G League.

More from WholeHogSports: Respect mutual between Musselman and Texas' Beard

In addition to his apparent high-level, multi-faceted game, Musselman found Black to be respectful and easy-going. His demeanor jumped out to Razorbacks staff members who played a role in ultimately bringing him into the program.

“The whole recruiting process with him and his mom and (Duncanville basketball) Coach (David) Peavy and his brother, it was about as easy as (with any player I’ve recruited),” Musselman said. “When I say easy, not that it wasn’t extremely competitive with other programs, but easy in the fact that it’s really fun and easy to recruit someone who you enjoy being around their inner circle and their family.

“We felt that way from the beginning dealing with Anthony and his family.”

Musselman also noted that Black is so likable that he and his coaching staff found it a bit challenging early on to harp on him when needed.

As a result of his performances, Rogers (Okla.) State and the four teams Arkansas faced in Europe likely are not as smitten with Black as the Razorbacks. Surely, though, they respect his array of game-changing traits just the same.

The outing came a week after a 9-rebound, 9-assist, 3-block effort in the team’s annual Red-White Game in Barnhill Arena.

Against Rogers State he had the highlight of the game, emphatically finishing a lob pass from Nick Smith with a one-handed dunk over a defender and through contact. The was No. 8 on SportsCenter’s rundown of the top 10 plays of the day.

Many of his teammates, including Smith, Brazile and junior guard Davonte Davis, looked at Black with hands-behind-the-head amazement in the aftermath.

“I think the biggest thing with Anthony is just that he's going to keep getting better,” Musselman said. “I mean, he's just scratching the surface, so because of his ceiling, I mean, he's a really, really special player. The only guy that we've had that's (similar) — and they're different players — is Cody Martin (at Nevada). You know, a 6-foot-7 point guard.

“You just don't get point guards that tall and that athletic.”

Black’s mission each time he takes the floor is to impact winning in any way he can. His offense, he said, will come, but making teammates better is higher on his list of priorities.

“We have a lot of talented players,” Black said. “We have a lot of dudes who can score the ball. My game is really just taking what the defense gives me and trying to make plays for my team. On defense, you know, (my goal is) just rebounding, blocking shots, going after the ball.

“I know we have good enough teammates that if I have an off night, like shooting, I know my teammates have got me.”

Those teammates and Musselman all anticipate a great deal of success with Black in the fold.

“He’s just unique. You can look over the last several years. There’s not many college basketball players who can do what he can do.”