Yurachek to receive raise, extension after reported interest by Auburn 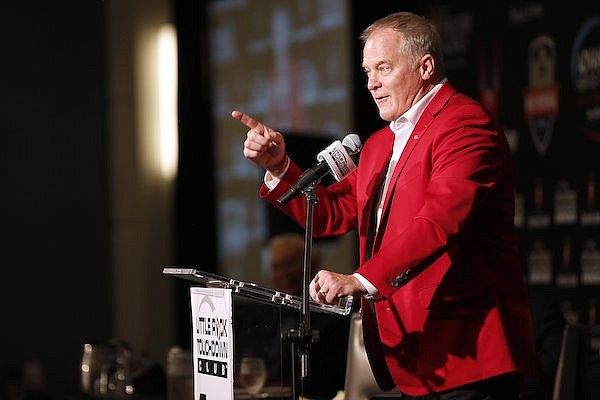 FAYETTEVILLE — University of Arkansas Athletics Director Hunter Yurachek turned down an offer to take the same job at Auburn, according to reporting Monday by Arkansas Business.

According to information obtained by the Arkansas Democrat-Gazette as part of a Freedom of Information Act request, Yurachek's salary will be increased to $1.5 million per year beginning in January 2023 and his contract will be extended through Dec. 31, 2027.

Yurachek was previously under contract through June 30, 2027.

Beginning in 2028, Yurachek will be eligible to receive $250,000 in deferred funds from each year of the contract. He is also eligible for additional raises consistent with increases in UA faculty and staff pay.

The contract amendment has not been formally finalized, but details were outlined in an Oct. 27 email from UA System President Donald Bobbitt to other UA leaders. That email was provided as part of the FOIA request.

Yurachek did not address the Auburn job directly, but released a statement Monday shortly after the Arkansas Business report went online.

“Throughout the nation, many have taken notice of the record-breaking success we have achieved together at the University of Arkansas,” Yurachek wrote. “Our many accomplishments are a credit to the collective commitment of our student-athletes, coaches and staff members, Razorback Foundation members, season ticket holders and fans. I am sincerely appreciative of the continued support for our program from our Board of Trustees, President Don Bobbitt, Interim Chancellor Charles Robinson and our entire campus administration. I am honored to be the Director of Athletics at the University of Arkansas and look forward to even greater things to come as we move forward together as ONE Razorback.”

Yurachek, who was hired at Arkansas in December 2017, signed a 5-year contract extension in February that increased his salary from $850,000 to $1.25 million per year. He is also eligible for up to $175,000 in bonuses each year following an annual review by the UA chancellor.

The Razorbacks’ most profitable programs, football and men’s basketball, have experienced a resurgence under head coaches hired by Yurachek in 2019.

Arkansas football coach Sam Pittman has a 17-14 record in his third season and is one victory away from taking the Razorbacks to a bowl game for the second consecutive season. Coach Eric Musselman has led the basketball program to the Elite Eight of the NCAA Tournament the past two seasons and has a team ranked 10th in the preseason AP Top 25.

Nine other sports at Arkansas have won at least one SEC championship since the beginning of the 2020-21 academic year. As a result of their success, Yurachek has overseen long-term contract extensions for several Arkansas head coaches, including Pittman, Musselman and baseball coach Dave Van Horn.

“People ask me right now what the secret sauce is to why we're having so much success,” Yurachek said Oct. 12 during a speech at the Hawgs Illustrated Sports Club, “and it starts with our head coaches and the leadership roles they have within our department, not only for our student-athletes, but for their assistant coaches and our staff, and the way they carry themselves in our community. So it's important to have them locked up. Most of them are locked up now for five, six or seven years, depending on the incentives and the success they have. And again, they're a big part of the success we're having, and I don't want to go through any more coaching searches anytime soon.”

On Monday, Auburn fired its football coach, Bryan Harsin, in the middle of his second season. Harsin’s team lost 41-27 to Arkansas last week to fall to 3-5 this season and 9-12 during his tenure.

The Associated Press reported last Saturday that John Cohen, athletics director at Mississippi State, is in discussions to take the job at Auburn. Allen Greene stepped down from that role at Auburn in August.