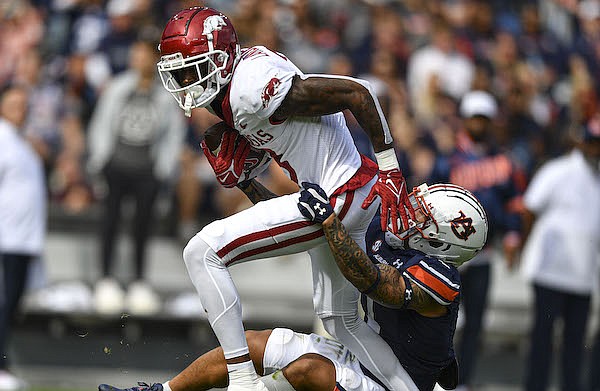 Arkansas wide receiver Matt Landers (3) is tackled by Auburn safety Donovan Kaufman (1), Saturday, Oct. 29, 2022, during the second quarter of the Razorbacks’ 41-27 win over the Tigers at Jordan-Hare Stadium in Auburn, Ala. Visit nwaonline.com/221030Daily/ for the photo gallery.

He again nodded when asked if the Toledo transfer’s play is more along the lines of what was anticipated when the Razorbacks signed him out of the NCAA transfer portal.

Simply put: Landers is producing, and Pittman is thrilled.

Confidence was the difference for Landers during Arkansas’ victories at BYU and Auburn.

Following a 123-yard outing in the Razorbacks’ win over Missouri State on Sept. 17, Landers’ numbers plummeted. He caught three passes for 50 yards over the next three weeks.

Landers was held without a reception in the loss at Mississippi State. That day, his string of 10 consecutive games with at least one catch was snapped.

But in Arkansas’ last two outings, he has looked better than ever. Pittman said last Monday that Landers would have to be good down the stretch if Arkansas hoped to close the regular season on a note similar to last year, when the team won five of its final six games.

A long, speedy and fluid target, Landers may be turning the corner for the Razorbacks.

“To be honest with you, I think KJ (Jefferson) is the one who really looks to me like he's looking for him a little bit more,” Pittman said, referencing his quarterback. “Now, he has to get open. Certainly he's No. 1 in read progression a lot more than what he was earlier in the year.”

At BYU, Landers caught 8 passes for 99 yards and 3 touchdowns, and he led Arkansas in receiving yards last Saturday with 115 yards on 4 catches. It is the best two-game stretch of his career.

Last season, Landers also had a combined 8 catches for 207 yards and 3 scores against Eastern Michigan and Bowling Green.

Perhaps best of all, his 12 catches have come on 15 targets. It is apparent that Landers' chemistry with Jefferson is growing by the week.

“He’s extremely hard on himself, so anything that he doesn’t get, he’s just down on himself,” Jefferson said last Saturday. “Being able to get him into rhythm early and let him get a feel for the game, then I know I can go to Matt in tough situations.”

According to Pro Football Focus, Landers recorded two of his top three offensive grades of the season at Auburn (67.5) and BYU (76.5).

And a potentially good sign for the Razorbacks: Landers has caught 15 passes for 375 yards and 4 touchdowns in his career during the month of November. The yards and touchdowns are his most in any month.