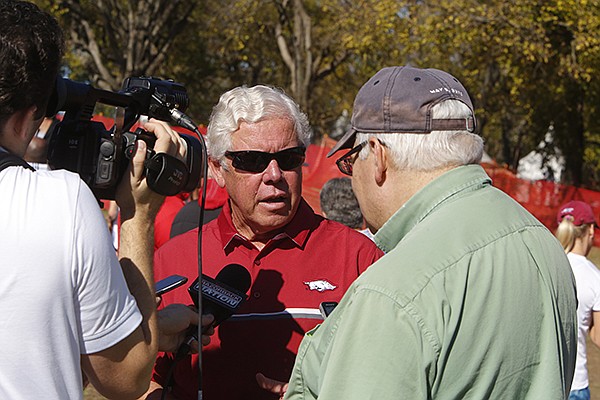 FAYETTEVILLE — For a change, the University of Arkansas cross country teams aren’t favored to win SEC championships this year.

Both Arkansas teams finished second in preseason polls to Alabama in voting by SEC coaches.

The Razorbacks’ women’s team, which has won nine consecutive SEC titles and 22 since Arkansas joined the conference in 1991, received six first-place votes to eight for the Crimson Tide.

Arkansas’ men’s team, which won the past two SEC titles and has taken 27 of 31 since joining the conference, got five first-place votes to Alabama’s six. Tennessee also got a first-place vote for the men, who have two fewer cross country teams than the women.

Coaches aren’t allowed to vote for their own teams, and Arkansas women’s Coach Lance Harter and men’s Coach Chris Bucknam said they voted for Alabama.

“I’m hoping that people sleep on us a little bit,” Bucknam said. “Hey, it’s fun no matter where you’re ranked.

“We’re just excited to be starting the season. I’m glad I’m coaching the team and we’re in the mix.”

Both Arkansas teams open the season today at the Cowboy Preview in Stillwater, Okla., with a field that includes host Oklahoma State, Texas A&M, SMU and Tulsa.

Bucknam is going into his 15th cross country season as Arkansas’ coach.

Harter is entering his 34th and final season at Arkansas. He announced last year he’ll retire from coaching after the NCAA Outdoor Track and Field Championships this school year.

Chris Johnson, Arkansas’ assistant who coaches the sprinters, will replace Harter as head coach of the women’s cross country and track and field teams.

Harter has led the Razorbacks to 44 SEC and six national championships in cross country and track and field.

“I’m so deep into the forest now, all I can see are the trees,” Harter said when asked how much thought he’s given to this being his final cross country season as coach. “We’re really focused on the challenge at hand.”

Ewert is back after missing last season because of a foot injury.

Arkansas also will be counting on some inexperienced runners with eight freshmen after the loss of Krissy Gear, Lauren Gregory, Megan Underwood and Logan Jolly.

This will be sophomore Patrick Kiprop’s first cross country season at Arkansas, but after transferring in January, he has won SEC titles in indoor and outdoor track. Other experienced runners include seniors Jacob McLeod, Ryan Murphy, and juniors Myles Richter and Josh Shearer.

“It’s a time for this new crop of athletes to step up and assert themselves and prove that they can lead an SEC championship team,” Bucknam said. “That’s what I’m excited about — to see if they can answer the call.”