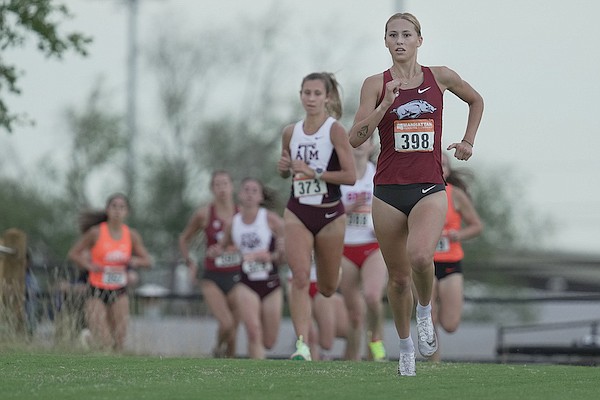 University of Arkansas sophomore Taylor Ewert, who was out most of last year because of a foot injury, opened the cross country season by winning the individual title at the Cowboy Preview on Thursday in Stillwater, Okla., to lead the Razorbacks to the team victory.

Arkansas, which won the team title with 42 points, had its five scorers finish among the top 15 individuals.

“It’s been almost a year since my last race,” Ewert said in an Arkansas news release. “I’ve had a lot of ups and downs, but it just feels good to get my feet underneath me.

“I still have a ways to go, and this is definitely a positive start. I just hope everyone keeps improving and the whole team has a great season.”

“This was a good meet to kind of get that initial competition under our belt,” Arkansas women’s Coach Lance Harter said in a UA news release. “It comes very quickly when school has barely started. A lot of it is a reflection on what kind of summer training they had.”

In the men’s 5,000 meters race, Arkansas sophomore Eliah Schreml took third in 14:56.5 as the Razorbacks were second in the team standings with 51 points. Oklahoma State won with 42 points.

Texas A&M finished third with 52 points and Tulsa was fourth with 78.

“I’m just looking for effort right now. It’s not about time, it’s just about guys putting in a great effort.

“If they do that consistently over the course of the season we’re going to get better. So, I thought we were off to a good start today."