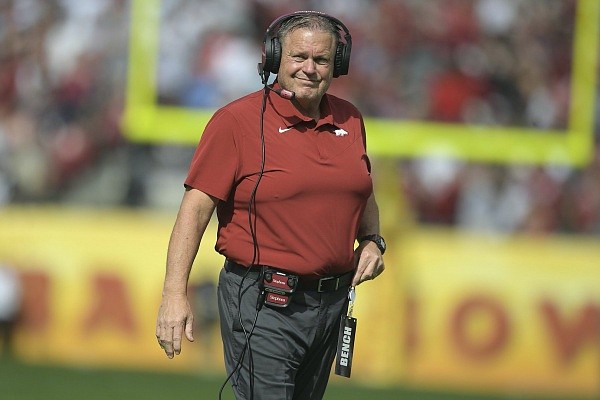 Arkansas coach Sam Pittman reacts after a score during the first quarter of Arkansas' 24-10 win in the Outback Bowl at Raymond James Stadium in Tampa, Fla., on Jan. 1, 2022.

FAYETTEVILLE — University of Arkansas Coach Sam Pittman rarely passes up a chance to use his self-deprecating humor, such as on Wednesday when asked how much different this year feels after his first two seasons as a major college head coach.

“My first year I didn’t know anything, and there’ll be some people say I still don’t,” Pittman said. “But my first year was, ‘How do I call the officials over to talk to them? Where’s switch 1, 2, 3 [on his headset]? Hit this button to go to special teams.’

“It was all nerve-racking. ‘What are we going to do pregame?’ All these different things that are now Year 3. And so you’re more comfortable at anything if you’ve done it before.”

Pittman said he had to check himself to not let being more comfortable turn into being lax.

“I don’t think we’ve done that,” he said. “We’ve had the coordinators back, so that’s helped me tremendously. All three of them.”

The SEC Network’s traveling game day show “SEC Nation” will be on campus today and Saturday with several shows originating from the Old Main Lawn.

The “Paul Finebaum Show” will broadcast live starting at 2 p.m. from the lawn today.

On Saturday, the “Marty & McGee” show with Marty Smith and Ryan McGee will air from 8 a.m. to 9 a.m. on site, as it will for every “SEC Nation” set this season.

“SEC Nation,” with host Laura Rutledge joined by Roman Harper, Jordan Rodgers and Tim Tebow, will air from the lawn from 9 a.m. to 11 a.m. Rutledge is in her seventh season on the show and sixth as host.

Sam Pittman was asked Wednesday what game day routine he looks forward to the most.

It was an easy answer for the third-year head coach.

“I like to win and go in the locker room and see those kids,” Pittman said. “I’m telling you, that’s a great question. It’s priceless. Nothing in the world can buy it.

“There ain’t enough money in the world can buy it. But when we win, and I get to go in there and brag on our coaches and see their face and then see the kids’ face of hard work and when we win, that’s why you coach. It’s incredible.

“I love that. I love Fridays when I talk to the team. You asked specifically I think on game day. And I love Saturdays before we go out. It’s 30 seconds, 35 seconds. But you can feel it. You can feel it, what’s getting ready to happen and the excitement with the kids. Those are the special moments. Obviously, when you win and you’re around those kids, it’s incredible.”

In their only encounter at the American Football Coaches Association convention last year, Cincinnati Coach Luke Fickell and Arkansas Coach Sam Pittman talked briefly backstage. Fickell told Pittman that his sons liked to wrestle, which Fickell also did as a youngster.

Pittman was asked this week if, as a native Oklahoman, he wrestled as well.

Turns out he had in the fifth grade, where he lost to a sixth-grader on riding time in a championship match.

“If you’re going to the point where Coach Fickell and I are going to wrestle, that will not happen because he’d put me in some kind of double chicken wing and I’m not trying to do all that.”

Pittman said he remembered the name of the sixth-grader who beat him, “But I’m not going to give it out right now because he’ll make headlines on me.”

Just past noon, Yurachek posted a picture on Twitter of the “Arkansas” logo painted in an end zone at Reynolds Razorback Stadium with just a brief outline of red around the white letters.

“Supply chain issues with red point, I guess this is the best we can do for Saturday,” Yurachek wrote.

A short while later, he followed up with, “Just kidding and having a little fun with Razorback fans on social media today.”

That post featured several shots of “Razorbacks” in the end zone fully surrounded by red paint, as well as the 20-yard-long Razorback at midfield starting to get its red coloration.

Cincinnati has had its share of top-notch coaches over the years, many of whom have gone on to capture bigger fame elsewhere, including current LSU Coach Brian Kelly, who led the Bearcats to a 34-6 record from 2007-09.

Sam Pittman has been supportive of Arkansas’ coaches in all sports, including Courtney Deifel, the softball coach who led the Razorbacks to SEC regular-season and tournament championships and reached an NCAA Tournament super regional before losing to Texas.

Last Friday, UA officials announced a raise and contract extension for Deifel that could go through 2030.

Pittman, 60, joked about the extension he received being through 2026 compared to Deifel’s being four years longer.

“They thought I might be 6 foot under by that date,” he said with a laugh.

Pittman said he loved Deifel getting a new contract and added that when he was at Arkansas as offensive line coach, the softball team had back-to-back 1-23 SEC records in 2015 and 2016.

“When I was here the last time, their program was worse than our program when I got back,” said Pittman, who took over after the football team was a combined 1-23 in the SEC from 2017-2019. “And then look what she’s done.

“It’s an inspiration to all of us coaches, and she is the salt of the earth. She is a wonderful person, and I’m ecstatic for her and really, more importantly, for the kids that she coaches.”

Two days out from kickoff for Cincinnati at Arkansas, the forecast on weather.com was calling for a temperature in Fayetteville between 81 and 82 degrees at kickoff, with about a 17% chance of rain at 3 p.m.

A strong chance for thunderstorms are in the forecast for Northwest Arkansas virtually all day today.

The ESPN broadcast team assigned to the game is Dave Flemming on play by play, Rod Gilmore as analyst and Tiffany Blackmon as sideline reporter.