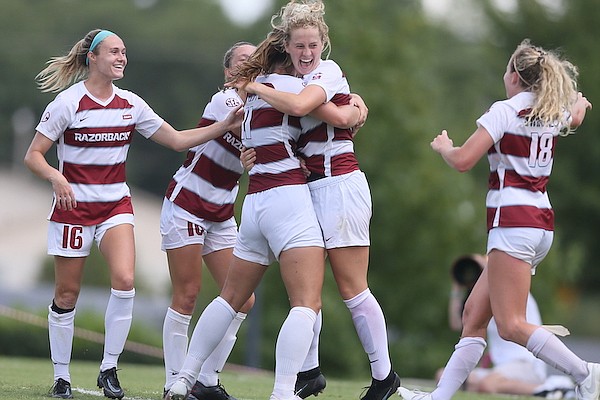 Arkansas' Bea Franklin (second from right) celebrates a goal during a game against Michigan State on Sunday, Sept. 4, 2022, in Fayetteville.

FAYETTEVILLE — In the latter stages of Arkansas’ 1-0 victory over Michigan State on Sunday at Razorback Field, it looked as if the game might be headed toward a scoreless tie.

Arkansas (4-1) had taken 17 shots, with six saved by Michigan State keeper Lauren Kozal. The redshirt senior was playing a masterful game in the box and making diving stops to keep the Razorbacks off the board.

Prior to Sunday she had only given up one goal this season and earned the latest Big Ten goalkeeper of the week honors.

Bea Franklin and the Razorbacks were able to make her surrender goal No. 2 in the 77th minute.

After a Michigan State (4-1-1) foul gave the Razorbacks a set-piece situation with 14:14 left to play, Ava Tankersley kicked it toward the goal and a leaping Franklin found the ball with her head. She directed it into the bottom left of the net to give Arkansas the game’s only goal.

“We just knew that they had a strong keeper, so somebody had to get in front of the keeper on any free kick or corner kick we had,” Franklin said. “That was my mission on that kick, and I just was able to get my head on it.”

The win was a big one for Arkansas, coach Colby Hale said, against a Spartans team he expects to turn heads.

“That’s a good team,” Hale said. “We know they’ll be ranked and finish well. We knew this would be a big challenge on a Sunday. I did think the game kind of ebbed and flowed, but I thought we controlled tempo. We call it ‘set-piece Sunday’ for a reason. Sunday games are decided on grinding through it and set pieces, and I thought we did that.”

Tankersley recorded her team-leading fifth assist of the season, which ranks third in the SEC.

It was Arkansas’ first 90-minute shutout of the season. The team posted a 3-0 victory over Western Michigan on Thursday, but it was a shortened game that was called off in the 72nd minute due to weather.

Razorbacks keeper Grace Barbara recorded three saves on 12 shots by Michigan State. Arkansas out-shot the Spartans 19-12, including 9-3 on goal. Franklin gave Barbara and the defense props for a complete effort.

“That’s just the frustrating part about soccer,” Franklin said. “You play 90 minutes and lot of times you tie. So, if we could just get one (goal) we’re not satisfied, but we’re happy.”

Michigan State coach Jeff Hosler had high praise for the effort from Kozal, who finished with eight saves.

“I think we have the best keeper in the country,” Hosler said. “She was an All-American last year for a reason. She’s really good with her hands and deals with pressure really well. There’s not much she can do on the goal that was conceded. Not many people win balls over Franklin in the box.”

“She’s tremendous,” Hale said. “She’s going to win them a lot of games.”

Arkansas has won four straight by a combined score of 14-2. The Razorbacks are scheduled to play at No. 6 BYU on Thursday at 8 p.m. Central in Provo, Utah.