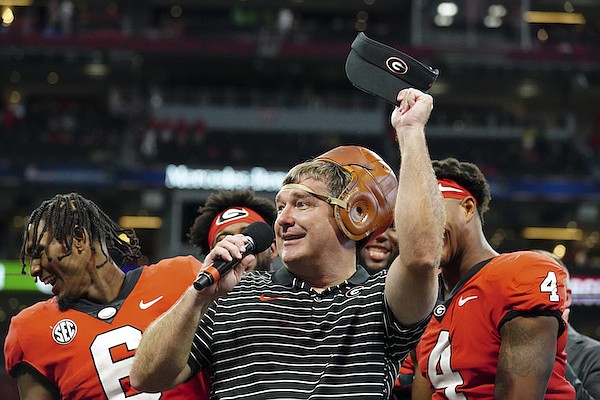 The defending national champions came into the season ranked No. 3 in the country and hardly overlooked behind No. 1 Alabama and No. 2 Ohio State.

But after losing 15 players to the NFL draft, including nearly half a defense in the first round, it seemed fair to bake in a little bit of regression.

The Bulldogs crushed No. 11 Oregon with stunning ease, unleashing a more dynamic offense and a defense that was just as salty as last season's wrecking crew.

Stetson Bennett passed for 368 yards without playing a down in the fourth quarter. Seven Georgia receiver caught multiple passes, all averaged at least 13 yards per catch.

The question coming into the season about Georgia was not whether it would be among the best teams in the country again. That was clear.

Rather, could Georgia truly be like Alabama? A regression-proof juggernaut that pumps out national-championship level teams annually.

Looks like it. The last defending national champ to beat a ranked opponent so decisively in its season-opener? Alabama, when it thumped USC 52-6 in 2016.

The beatdown at Mercedes-Benz Stadium was also yet another indictment of the Pac-12.

Oregon might still be one of the beleaguered conference's best teams. The Ducks under former coach Mario Cristobal have recruited better than other Pac-12 team recently. But they're not anywhere near what Georgia has built.

One of the reasons why Oregon hired Georgia defensive coordinator Dan Lanning was the hope of bringing some of that SEC secret sauce to the Pacific Northwest.

Whether that can be done as the Pac-12 is whittled away is an open question. Everything about the Pac-12 seems tentative and tenuous these days.

The conference's Week 1 got even worse later when league favorite and No. 7 Utah lost a heart-breaker at Florida.

The Utes should take no shame in falling short in the Swamp. Especially with Gators quarterback Anthony Richardson showing flashes of superstardom.

Still, it was a huge missed opportunity for Utah against a Florida team that is in Year 1 of a rebuild under Billy Napier.

This much is certain: the gap in talent between the top of the Pac-12 and the top of the SEC is more vast than the 2,600 miles that separates Eugene, Oregon, and Atlanta.

No. 13 North Carolina State and rival North Carolina both went on the road in-state for Week 1 and the Atlantic Coast Conference rivals needed some good fortune to get back to the Research Triangle with victories.

The Wolfpack's season a great expectations started at East Carolina. After failing to put the Pirates away with empty red zone trips in the second half, they needed two missed kicks by ECU in the final minutes to escape.

N.C. State has a history of breaking its fans hearts, but this would have been an all-timer. Instead, they'll return to Raleigh with Devin Leary's Heisman candidacy off to a slow start (17 for 33 for 211 yards), but still hopeful of being a dark horse playoff contender

The Tar Heels went west to Boone to face Appalachian State and played an early candidate for game of the year. UNC needed to stop two late 2-point tries to survive a stunning 40-point fourth quarter by the Mountaineers.

Mack Brown's team barely managed to avoid being the second ACC to lose at a Sun Belt school in this weekend.

The start of the Brent Pry era at Virginia Tech got off to a rough start Friday night when the Hokies made a mountain of mistakes (five turnovers and 15 penalties) and lost at brand new Sun Belt member Old Dominion.

Southeastern Conference Commissioner Greg Sankey is at best cautious in his assessment of whether the College Football Playoff can be expanded to 12 teams by the 2024 season.

The presidents who oversee the CFP voted Friday to implement by 2026 a 12-team plan that Sankey worked on for two years and was first unveiled in June of 2021. Expansion plans stalled last year, much to Sankey's chagrin, but the presidents pushed it forward.

Can the commissioners now work out the details and logistical hurdles quickly enough to to replace the four-team model with 12 teams by 2024?

Sankey said it will be difficult.

“To me what’s unfortunate is we could have spent the last nine months talking about the implementation and we’re nine months farther behind than we would have been had we gotten to this back in January," he told reporters before the Georgia-Oregon game in Atlanta.

Cade McNamara was OK as the starter in No. 8 Michigan's a romp over Colorado State, but J.J. McCarthy still made an impact with a nifty touchdown 20-yard TD run. McCarthy, the former five-star recruit in his second year, gets the start next week against Hawaii. The lean here is McCarthy ultimately emerges as QB1. ... Seven the hard way: Iowa beat South Dakota State 7-3, getting two second-half safeties as the Hawkeyes offense picked up right where it left off last year when it ranked 121st in the country under coach Kirk Ferentz's son, Brian Ferentz. ... Attendance at the Rose Bowl for UCLA's rout of Bowling Green was 27,143, a record low. It's that kind of fan apathy that drives fans of schools that don't play in major media markets or have big brands crazy. UCLA is heading toward Big Ten riches, but schools such as Iowa State or Kansas State are at risk of being left behind. ... After four straight losing seasons, there is hope for Arizona after an impressive road win to open the season against San Diego State. UTEP transfer Jacob Cowing caught three TDs from Washington State transfer Jayden de Laura. ... No. 23 Cincinnati lost for the first time in the regular season since the final game of 2019 at No. 19 Arkansas. ... After one game each against overmatched opponents, it looks like Lincoln Riley and Oklahoma are going to be OK without each other. ... QB Quinn Ewers' debut for Texas went about as expected against Louisiana-Monroe. Top-ranked 'Bama rolls into Austin next week coming off a 55-0 victory against Utah State.