Injury report: Johnson might return, no word on DBs for South Carolina game 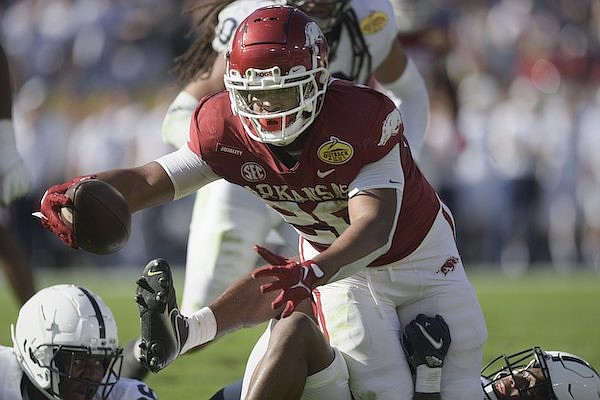 Arkansas running back Dominique Johnson carries the ball during the Outback Bowl against Penn State on Saturday, Jan. 1, 2022, in Tampa, Fla.

FAYETTEVILLE — Arkansas running back Dominique Johnson will increase his workload in practice early this week to determine if he can play for the 19th-ranked Razorbacks against South Carolina on Saturday.

Johnson, who rushed for 575 yards and a team-high seven touchdowns last season as a freshman, injured a knee during Arkansas’ 24-10 victory over Penn State in January and has had limited practice reps since. He did not play in the Razorbacks’ 31-24 season-opening victory over No. 23 Cincinnati last week.

“We're going to put him out there this week — today — and see what he can do,” Arkansas coach Sam Pittman said Monday. “I felt like we were experimenting with him a little bit last week, and it was basically, ‘I don't think he's going to play,’ type experimentation. We were trying to get him ready for a possibility to play against South Carolina. We're going to amp up his responsibility and his reps and see what happens on if we feel good about him and, more importantly, if he feels good about it then he'll play.”

With Johnson out of the lineup, running back Raheim “Rocket” Sanders and quarterback KJ Jefferson carried the load for the Razorbacks against Cincinnati. Sanders rushed for 117 yards and Jefferson added 62 as Arkansas rushed for 224 yards and an average of 5 yards per attempt.

In other injury news, Pittman did not have an update on the status for injured defensive backs Jalen Catalon and Myles Slusher. Both appeared to suffer upper-body injuries during the first half of the game against Cincinnati, though Catalon played some snaps during the third quarter.

“We’re not ready, really, to figure out exactly Catalon’s situation — we haven’t, let's say that,” Pittman said. “I guess Slusher is in the same boat there.”

Pittman said defensive lineman Isaiah Nichols will be fine after he suffered an undisclosed injury during the Cincinnati game. Nichols left the game in the second quarter, but was on the field in the fourth quarter.