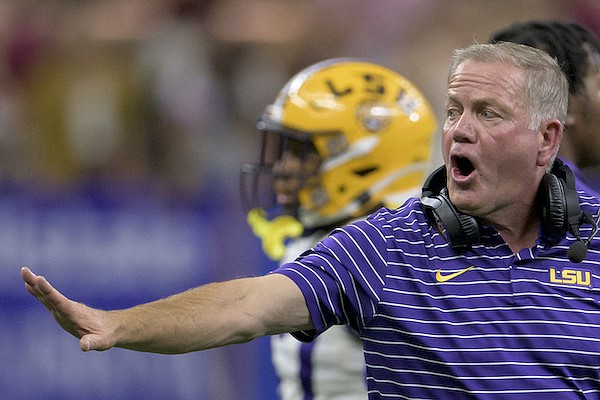 If not for Brian Kelly, the SEC would have had a perfect weekend in college football.

As it was, the league was 13-1 and now has six teams ranked in the Associated Press top 25.

Then there’s Kelly and LSU, who lost to Florida State 24-23.

The Tigers had a tying extra-point attempt blocked with no time remaining.

The question is, was and will forever be, what was Kelly thinking going for a tie?

Why didn’t the Tigers line up and win it with a two-point conversion?

They had the momentum, having just driven 99 yards in less than two minutes.

They had the home-field advantage playing in New Orleans, where they won their past two national championships.

They had the Seminoles on their heels.

Neither team looked that great. Oh, LSU appeared very athletic and fast but played like a reflection of Kelly, who demonstrated about as much emotion as a statue.

The SEC should have been undefeated, although there were really only three competitive games on the schedule, including Sunday night’s LSU-FSU game.

Arkansas beat No. 23 Cincinnati 31-24 and Florida beat No. 7 Utah, to which the national media reacted like it was a huge upset.

Those media members are apparently in denial of how average the Pac-12 has become.

It didn’t matter if you bet it on Oaklawn’s new app, Oaklawn Sports, or at Southland or Saracen, the Utes were about a field goal favorite and three points is not an upset.

The Oregon at Georgia game was billed as a big game, but the defending national champs knocked the webbing off the Ducks’ feet, 49-3.

The Bulldogs led 28-0 at the half on their way to 571 yards of total offense.

Meanwhile, everyone else in the SEC did exactly what they were supposed to do, win.

Some of the scores were not eye-opening, like Texas A&M 31-0 over Sam Houston State or Mississippi beating Troy 28-10, although the Trojans have a pretty good defense.

He had already passed for five touchdowns and rushed for one.

Most oddsmakers had the reigning Heisman Trophy winner as the second-favorite behind Ohio State’s C.J. Stroud for the most coveted trophy in college football.

The Buckeyes struggled to beat Notre Dame 21-10. Stroud had two touchdown passes and slipped to second in the odds behind Young.

Kentucky beat Miami — the one in Ohio not Florida — Auburn put away Mercer, South Carolina downed Georgia State and Vanderbilt went to 2-0 on the season with a win over Elon, although it was by 42-31.

Overall, the SEC had a good weekend, except for LSU which should have gone for the win.

It wasn’t shocking news to learn the Alabama Million Dollar Band, self-named by the way, will not be attending the game in Austin on Saturday when the Crimson Tide take on the Texas Longhorns.

The official explanation is that the seat allotment didn’t allow for the 400-member band.

Alabama gets 500 free tickets and can purchase another 4,500, which no doubt they did before a firecracker went off on the Fourth of July.

The unofficial reason is that in 2019, when LSU played at Texas, the Tiger band was seated in the upper deck — as far from the field as you can get.

Regardless, this might be a dangerous precedent for SEC bands and travel.